Corresponding member of the Academy of Sciences: Law amendments made because of Lembergs are similar to medieval penal methods

Amendments to the law due to the hatred of some politicians against the opponent conflict with the basic principles of the rule of law and are a clear signal to the judiciary how it should deal with a particular person, says Dr. iur. Ringolds Balodis, the corresponding member of the Latvian Academy of Sciences, Professor of the University of Latvia, in a conversation with Neatkarīgā.
20.09.2021. Ritums Rozenbergs 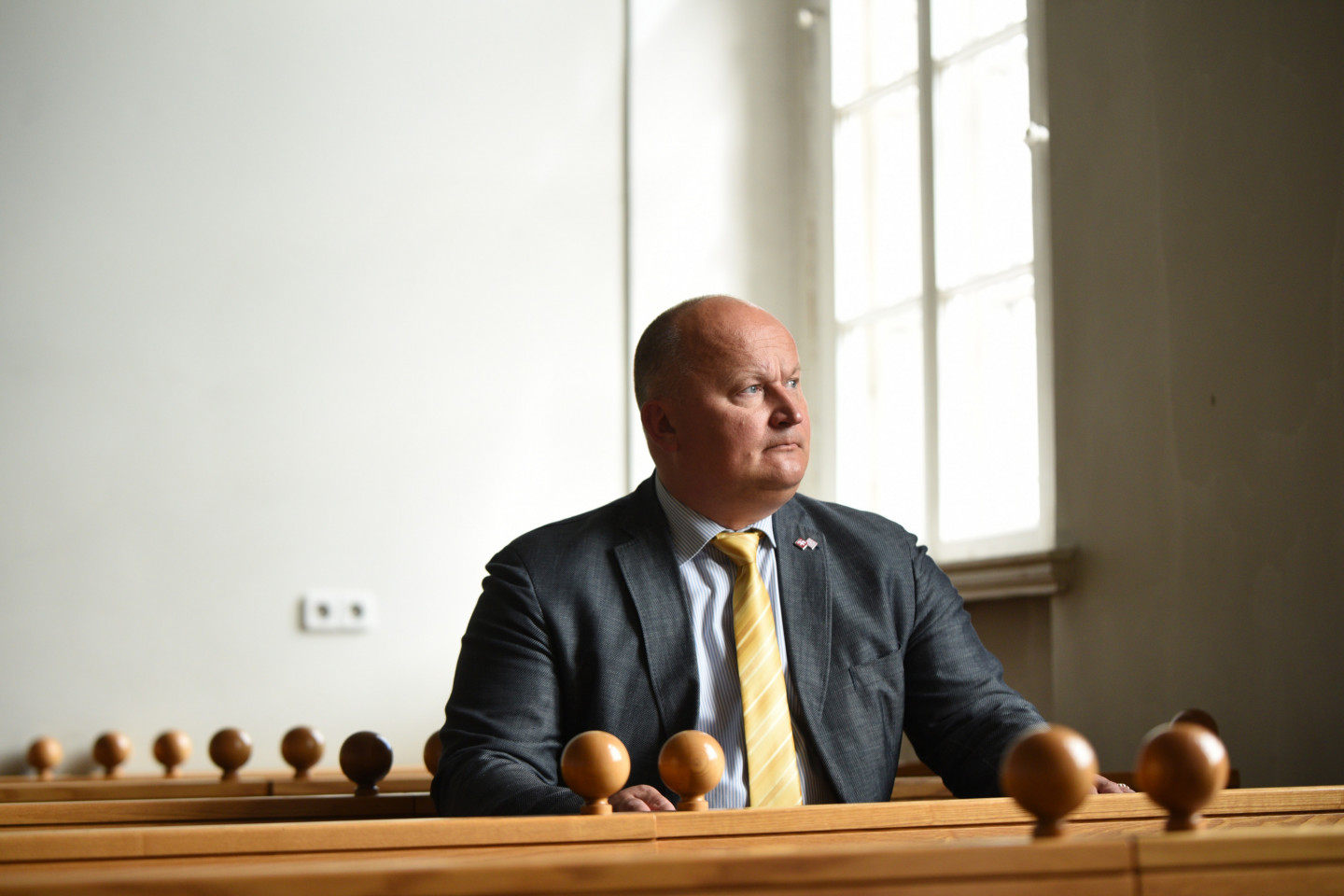 Corresponding member of the Latvian Academy of Sciences, Professor of the University of Latvia Dr. iur. Ringolds Balodis calls on the MPs to stop the bad practice of changing the laws for one person. The professor points out that in this way the legislature clearly indicates to the judiciary how it should judge Aivars Lembergs ©Mārtiņš ZILGALVIS, F64 Photo Agency

Last Tuesday, the Legal Affairs Committee of the Saeima supported amendments to the law for the first reading, which will prohibit former members of the Saeima and the Supreme Council, who have been imposed international or national sanctions, from visiting the Saeima building, attending parliamentary sittings and participating in its events.

There is only one person in Latvia who has been subject to US sanctions - Aivars Lembergs, a former member of the Supreme Council who voted for the independence of the Latvian state.

Juris Jurašs, the leader of the JKP, is one of the five applicants for these amendments to the law. It was he, together with his party members Jānis Bordāns and Gatis Eglītis, who went to the USA to talk about sanctions against the Freeport of Ventspils and A. Lembergs.

The curse of the Saeima

Discussions are taking place in the legal community on the compliance of the specific legislative initiative with the basic principles of the rule of law.

For example, R. Balodis believes that adapting the law to punish one particular person is similar to medieval punishment methods: “Speaking of these amendments to the law, I would like to move away from the specific person of Aivars Lembergs. After all, this is about good legislation, and it is a painful subject for us. This has been repeatedly pointed out by the Constitutional Court and several Presidents. If we are talking about the adoption of a sustainable legal framework, which would also be in line with good legislation, then amendments to the law that are meant for one person must not be adopted. I agree with the Legal Bureau of the Saeima that it could be determined, for example, that those MPs who have been convicted of intentional crimes or who turn out to have been in the KGB archives were denied entry to the Saeima. It would be appropriate to identify specific groups. On the one hand, the legislature has a wide margin of discretion with regard to political considerations, but on the other hand, that discretion is not unlimited. The legislature can, but should not, use its discretion to repress or deny a particular person a privilege. Speaking in the words of the Constitutional Court, observance of the principle of good legislation promotes the formation of public confidence in the legality of adopted decisions. Here, on the other hand, it is clear that the amendment to the law is directed against a single person who is simply not named. The stylistics remind me very much of Harry Potter, where magicians, like our MPs, when talking about the dark wizard Voldemort, usually called him not by name, but by "you-know-who" because they were afraid to mention his name. If the MPs had the guts to act from the positions of force, then, being aware of the votes of the Saeima members and the political power over law, they should have written "Do not let Aivars Lembergs into the Saeima." One can go even further by issuing a separate law or at least adopting a statement of the Saeima on the complete condemnation of this person. The church did the same in the Middle Ages, proclaiming anathema, the church's curse of expulsion from the church and the Christian community as such.”

Asked whether the applicants for amendments to the law had not crossed the line when laws were opened for amendments with the aim of punishing other former members of the Supreme Council who voted for Latvia's independence on May 4, 1990, R. Balodis replied: "It can be seen like that as well. But I assume that the applicants have not even thought about it."

Speaking about the low level of legal knowledge of the MPs of the Saeima and the fact that the majority will most likely vote for the next amendments to the law dedicated to A. Lembergs, Neatkarīgā asked what consequences can be expected after the amendments come into force. R. Balodis explained: “It creates a bad practice when we make laws based on liking or disliking a person. This is not right from a legislative point of view. We ourselves know that our legislation is not good. We also saw this in the context of administrative-territorial reform. The issue of non-explanation of Members' legislative initiatives is becoming increasingly important. In this particular case, there is no doubt that the amendments are designed to bother and restrict a particular person. The legislator must not do so. The legislator needs to look more broadly at the consequences. Example: In 1998, amendments were made to the Rules of Procedure of the Saeima. At that time, the national forces did not like the presence of Juris Boldāns in their ranks, because the allegations about the illegalities committed during the elections cast a shadow over the entire faction. As a result, the Rules of Procedure of the Saeima were amended - if a member is charged with a criminal offense, he or she does not have the right to work as a member of parliament. Eleven years later, Juris Jurašs appealed this amendment to the Constitutional Court. It ruled that the amendments made in 1998 did not comply with the Constitution. Thus, several MPs, including Jurašs, who were criminally charged, were able to continue working in the Saeima. These cases, when the law is changed for one person, can be compared. In the example above, working in a profession was prohibited. The second case we are discussing is the deprivation of privileges for a representative of the people who voted for Latvia's independence in the Supreme Council. In both cases, the law is amended on the basis of the same principle - dislike for one person. The Saeima Legal Bureau has a well-founded reprimand that it is necessary to talk about groups, for example, those who have been convicted of intentional crimes or serious and very serious crimes. Is it less important if former members of the Supreme Council who have been convicted of serious crimes walk through the Saeima than a member subject to sanctions?”

Instructions to the judiciary

Regarding Neatkarīgā's remark that the sanctions were requested from the US government by the same initiators of the amendments to the law, who are now amending the law to punish a particular person by not admitting him to the Saeima, R. Balodis pointed out: "I can't comment on this because I don't have that information. But everything looks exactly like the aforementioned Harry Potter example. Everyone knows what it's about but doesn't call it by name. Bad practice is starting to take root - another balance of political forces will be formed, new unwanted people will appear again, the law will have to be amended again. Such things should be avoided."

Asked whether, looking at the amendments in a broader scope, we can be sure that they are not directed against Latvian statehood, because they are intended to punish those who voted for Latvia's independence, R. Balodis said: “I do not think that it can be called that. That would be too broad. Rather, I think that this small step of the legislator, which is not even a normal step, but only a small one, is a sign to the judiciary. If the legislator puts a mark of Cain on a person that this person is not wanted, with such a small step the legislator shows the direction of how the judiciary should act. The judiciary fulfills its function, the legislator its own, but in this way, the legislator can label people. This can also be done with the help of a statement from the Saeima. Amendments to the law, which are dedicated to one person, clearly indicate how the relevant judicial authorities should act. Such a small step of the legislator certainly cannot go unnoticed by the court instances.”