Schools in Italy teach that Latvia is part of Russia

In Italy, geography to high schoolers is taught according to a textbook in which the Baltic States, including Latvia, are depicted on the map as part of Russia. The Latvian Embassy in Italy, together with the Estonian and Lithuanian embassies, is currently preparing a letter to the Italian Minister of Education. It is not yet known whether this geography textbook will be withdrawn from circulation in Italy.
22.09.2021. Baiba Puriņa 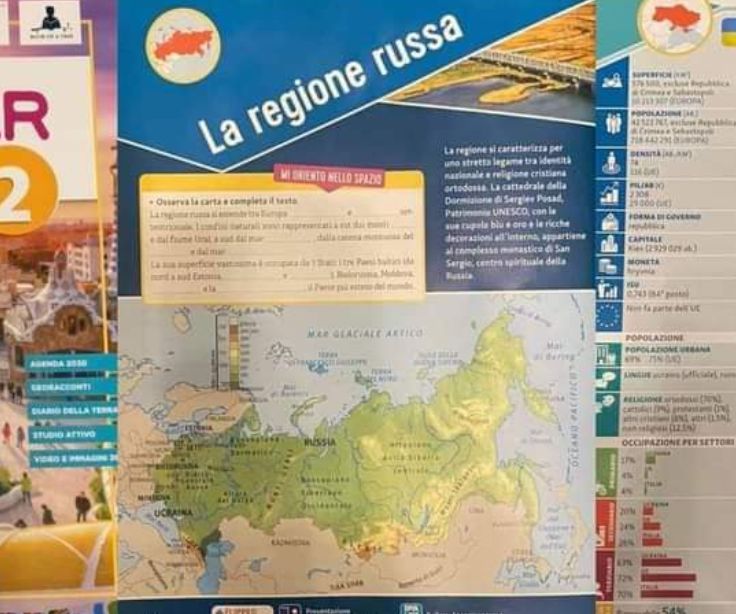 Ukraine was probably the first who noticed the erroneous map in the Italian geography book, as the country's embassy has already sent a letter of protest to the book's publishers. Ukraine and the countries of the Caucasus are also included in this book as regions of Russia.

The NRA portal has already written that Ukrainian journalist Olga Tokariuk shared an image of an Italian geography book on the microblogging site Twitter, which shows several countries, including the Baltic states, as parts of Russia. According to the journalist, the high school's geography book depicts the "Russian region", which also includes Latvia, Lithuania, Estonia, Ukraine, as well as the countries of the Caucasus.

"Ukrainian embassy in Italy already sent a protest letter to the publisher, I hope other countries do it too," Tokariuk said in the tweet.

The tweet had some outraged comments in which people point out that this is misinformation, and the book is not showing a map of the former Soviet Union because Kazakhstan is not included in the territory. People also emphasize that many of the countries included in the "Russian region" have been independent for 30 years now.

"I was going to suggest the publishing house were perhaps owned by Russian capital but then I saw that Crimea is considered Ukrainian territory on the next page. Utterly confused!" says one of the comments on the tweet.

Neatkarīgā contacted the Latvian Ministry of Foreign Affairs to inform about the case and find out Latvia's position on this issue.

"The Latvian Embassy in Italy is addressing this issue together with the Estonian and Lithuanian Embassies in Italy. A joint letter from the ambassadors of the Baltic States to both the publishers and the Italian Minister of Education is being coordinated,” the Ministry of Foreign Affairs replied to Neatkarīgā.

Currently, the Latvian Ambassador to Italy is the former Saeima MP Solvita Āboltiņa.