The desire of MP Artuss Kaimiņš, the leader of the New Conservative Party (Jaunā konservatīvā partija, JKP) and a receiver of the "Meroni's grant", to tear down Aivars Lembergs by pushing for amendments to the Saeima Rules of Procedure that would prevent him from visiting the Saeima, contradicts the basic principles of legislation, Aleksandrs Kuzņecovs, a doctoral student at the Department of Constitutional Law, University of Latvia, explained to Neatkarīgā.
24.09.2021. Uldis Dreiblats, Ritums Rozenbergs

Aleksandrs Kuzņecovs (pictured), PhD student at the Department of Constitutional Law, the University of Latvia, explains the obvious nonsense in the desire of some New Conservative Party MPs and parliamentarian Artuss Kaimiņš to demonstrate their power and tear down Aivars Lembergs by making amendments to the law that would prevent him from visiting Saeima buildings ©no Aleksandra Kuzņecova personīgā arhīva

Yesterday, already after Neatkarīgā talked with A. Kuzņecovs, the Saeima held a vote on the above-mentioned amendments to the Saeima Rules of Procedure and the majority of the Saeima rejected them. 26 MPs voted for - representatives of the New Conservative Party and the National Alliance (Nacionālā apvienība), as well as Artuss Kaimiņš, Ilga Šuplinska, Aivars Geidāns and Māris Mičerevskis, who do not belong to the factions.

There were 30 MPs against from Union of Greens and Farmers (Zaļo un Zemnieku Savienība), Harmony (Saskaņa) and those who do not belong to the factions. Meanwhile, Development/For! (Attīstībai/Par!), New Unity (Jaunā Vienotība) and several non-faction Members (25 in total) did not take part in the vote at all, which obviously also decided the fate of the vote.

This means that what the doctoral student A. Kuzņecovs said does not apply to the majority of the current Saeima after all. As well as what the corresponding member of the Academy of Sciences, Professor of the University of Latvia, Dr. iur. Ringolds Balodis said, which Neatkarīgā published earlier.

Indications of it being meant for Lembergs 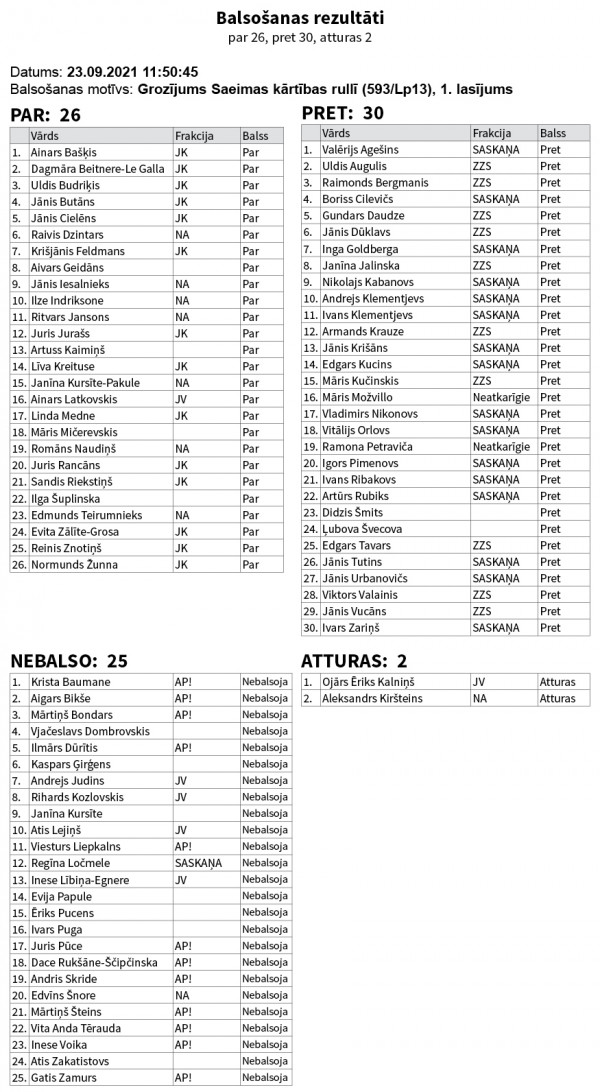 Results of the vote / Neatkarīgā

A.Kuzņecovs also explained that although Article 21 of the Constitution provides the legislator with the right to adopt laws to ensure its activities, they must be universal, corresponding to the mission of legislation in a parliamentary state governed by the rule of law. Speaking about the specific initiative of JKP and A. Kaimiņš to amend the Rules of Procedure of the Saeima in order not to allow former members of the Saeima and the Supreme Council who have been subject to US or EU sanctions to visit the Saeima, A. Kuzņecovs said: “They contradict legislative methodologies. We all understand to whom this amendment is being addressed. We know that these sanctions only apply to Aivars Lembergs, and they were imposed in December 2019. It is suspicious that this legislative initiative appeared immediately afterwards, not five or ten years ago. The wording of the amendments with the indication that there is no right to visit the Saeima building for former MPs against whom sanctions have been imposed is also suspicious. The question arises - why is the ban on entering the Saeima building not extended to those who have been criminally punished or are being prosecuted, who have been subject to an administrative penalty or penalties imposed by the Saeima Ethics Committee? All this indicates that the amendments to the law are directed against one specific person. In essence, a law must be an abstract, universally applicable normative act. In the specific case, the wording of the law is applicable only to one person. Such amendments may have negative consequences if another member of the Supreme Council is also subject to some sanctions and most MPs are aware that this former member should not be treated so badly by not being admitted to the Saeima. The law will have to be amended again. But the problem will arise - how to change it, but keep the restrictions only for Aivars Lembergs?”

As A. Kuzņecovs emphasized, the legislative initiative dedicated to A. Lembergs is a defective work of the drafters of the proposal and a hasty decision of those MPs who, when voting in committees, have not thought about the consequences after the law came into force: “It is not clear in what way these former MPs of the Saeima and the Supreme Council, to whom sanctions have been applied, could endanger the work of the MPs of the Saeima. The annotation of the amendments to the law states very succinctly that there is a law on sanctions, and it is indicated that Latvia must respect all sanctions and should avoid cases when former MPs subject to sanctions could interfere with the work of the Saeima. The annotation does not indicate why such restrictions are necessary and how they achieve their purpose.

First of all, former MPs have only the right to visit the Saeima buildings, but not to participate in the work of the Saeima. After all, they cannot participate in the Saeima sitting and vote or influence the votes. They can only sit and watch the sittings or walk along the corridors of the Saeima. The right of former Members of the Saeima and the Supreme Council to visit the Saeima building means respecting them and showing respect for the fact that they have participated in the legislative work. Perhaps the initiators of the legislation were guided by the logic that sanctioned former MPs could talk to working MPs in the Saeima buildings and give them bribes for voting? The question is - what would stop them from doing it outside the Saeima building? Here we see how our political elite wants to pass a law against one specific person, who would be denied the opportunity to enter the Saeima building. Thus, we see that many MPs of the Saeima do not like this one person very much, because due to this person it is necessary to change the Rules of Procedure of the Saeima - the norm in force since 1998, which allows former members of the Supreme Council to visit the Saeima freely. The norm was in force for 23 years, but when sanctions were applied against Aivars Lembergs, the idea arose to amend even the Saeima Rules of Procedure for this reason! It looks very bad for our legislator to do something like this, spending its time and resources on it. Instead, the legislature could pass actually worthwhile laws. Or even just work more carefully on these same amendments, on their reasoning and wording. From such work of the legislator, we can draw conclusions about our legislator and its composition. Most likely, after the amendments come into force, several complaints will be submitted to the Constitutional Court and then the Saeima will not be able to find a reason why such amendments were made.”

A show of power

Asked whether the desire to tear down Lembergs could be explained by the cowardice of some MPs and fears of a political competitor, A. Kuzņecovs explained "I do not think that it is a fear of a political competitor, but rather it is a show of power - we have the power to prevent Lembergs from entering the Saeima building. This legislative initiative is more aimed at the public, so that everyone can see that at this Saeima term, Aivars Lembergs has no more place in the Saeima. There is a feeling that many MPs really want to stick it to Lembergs."

Asked whether it would not happen that the initiators of the amendments to the law also spit in the face of the other MPs of the Supreme Council who voted for Latvia's independence in 1990, A. Kuzņecovs answered: “Well, that's precisely the case that due to one person other former members of the Supreme Council may also suffer in the future, as they may also be subject to sanctions in the future. I do not understand the logic of the initiators of the law. Maybe they think that sanctions will be applied only to Aivars Lembergs? It's strange. Either the initiators of the law simply want to tear down Lembergs, or they and the other MPs who voted for the law do not have a very high level of legal education."

Speaking about the absurdity of the draft law, where a murderer recidivist will be allowed to visit the Saeima if he is issued a pass, but Aivars Lembergs, who voted for the independence of this country, will not, A. Kuzņecovs said: “So it seems. This is what I already mentioned at the beginning of the conversation that the draft law states that the MPs to whom sanctions have been applied may not visit the Saeima building. But sanctions can vary. Nothing is said that the building may or may not house those who have been subject to criminal or administrative penalties. In this case, it is strange that, in the legislature's view, US or European Union sanctions are much more terrible than murder or theft. It is illogical that the legislator is so worried about sanctions. Let us be honest: these sanctions are a political decision. They are not based on a legal decision. There is a desire on the part of some Members to tear down a particular person, but it should be understood that politics is politics, but laws must not be passed in this way. This will also have negative consequences for the other members of the Supreme Council who voted for Latvia's independence. At some point, they will start thinking about what all this is about and what they really voted for in 1990!”

It should be reminded that the amendments analyzed here were submitted to the Saeima by JKP MPs Juris Jurašs, Dagmāra Beitnere-Le Galla, Juris Rancāns and the now-deceased Juta Strīķe, as well as Artuss Kaimiņš, who does not belong to the factions.