The army is starting to recruit robots

Like obedient dogs, robots move alongside a group of soldiers. Bigger and smaller - on the ground and in the air. In the demonstration organized at the Ādaži military base, the outcome of the battle was already clear, but this is really the future of warfare - man and the devices controlled by him will fight in tandem with human-controlled robots.
27.09.2021. Imants Vīksne 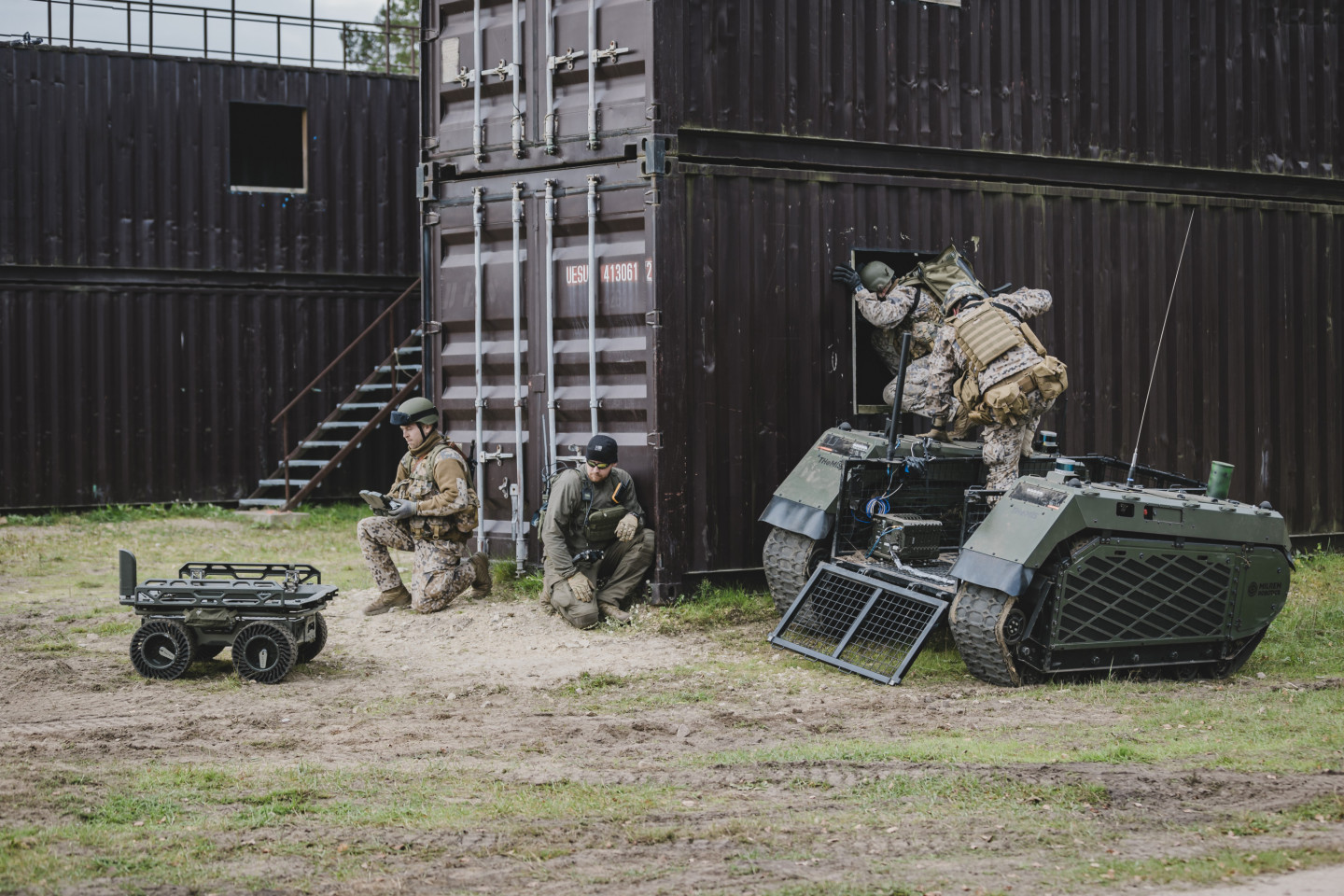 The term "unmanned vehicle" is somewhat misleading, as each robot has its own pilot, even if he is not physically seated in the robotic battle platform or aircraft. Someone has to press those buttons and give orders. Autonomous war machines are still science fiction and are likely to remain so in the future. Even if real artificial intelligence is ever created, entrusting warfare to machines will create an ethical problem - machines against humans. Autonomous systems would be too dangerous. Earlier this year, a decision was taken at the European Union level to launch a legal regulation on artificial intelligence and a possible global ban on lethal autonomous weapons systems that do not provide meaningful human control over critical targeting and attack functions. One of the goals set by politicians is to ban killer robots before they can arrive - learning machines with cognitive skills to decide what, when and where to fight.

The mission to involve military robots

Fortunately, in real life, at least for now, inventors, military companies, and national governments are interested in more down-to-earth problems than those seen in Hollywood blockbusters. Robots must become reliable military assistants. They must carry, transport, shoot, transmit when ordered, and be able to operate in a coherent, safe and effective manner. This is also the mission of the international European project iMUGS (integrated Modular Unmanned Ground System) - to combine the capabilities offered by the Member States in a single architecture. The project involves seven countries and 13 different business and scientific institutions - developers of drones, cyber security, command control, sensors and various innovative solutions. The total cost is estimated at over 35 million euros. This effort is necessary because unmanned vehicles are still an unexplored environment on land. Juris Ķiploks, the head of the Defense and Military Technology Research Center of Riga Technical University, explains that it is much easier for robots to move and orient themselves in the air and water than on the ground. On land, it is much more difficult to assess which road is safe. Even a person walking in a swamp will not always be able to tell if his next step will make him fall into a bog hole. A robot definitely couldn't do that. That's why the robot follows the human. The technology used in the military field lags behind the innovations offered by inventors and companies by an average of ten years, and this is because

in the field of defense, every machine, every screw has to prove its reliability over time. Lives depend on it.

What is the price of a human

Why are robots needed for fighting at all, and do the Latvian army need them? Neatkarīgā asked this question to Ingmārs Pūķis, Vice President of LMT. He himself is a national guard, understands how theory is put into practice. In his explanation, the keyword is cost. But it's not about the robots, it's about the price of humans:

"Small countries have few people, so a person is more valuable than technology. We do not have enough people, so we need more tools and information. Communication is required, sensors are required. The one who has more information wins the battle." This is also LMT's mission in the European project iMUGS. To connect different communication networks, to ensure their mutual communication between humans and also robots. The mission control system Smart Guard (Viedsargs) reads and translates the information provided by various sensors - where is the opponent, what weapons is he using, what communication channels of the opponent should be suppressed. Practical use of the new 5G standard.

A unit worth six figures

In the demonstration organized at Ādaži military base, it was possible to see how far the project participants have come with the development of a man and a robot working in tandem. The operation command post and the Smart Guard base were installed on the wheel armored vehicle DINGO 2 manufactured by the German company KMW. The project's lead partner, Estonian Milrem Robotics, provided two robotic continuous track battle platforms. One equipped with a heavy machine gun, the other with a radio frequency monitoring device. Another smaller robot has been developed by the Latvian company SRC Brasa.

The little robot is called Natrix (Latin - snake). It's low, fast. It can bring ammunition, it can take away the wounded (which was also demonstrated in practice), it is not audible, it is not noticeable. If one of the eight men in the battle group is injured, only three can fully fight. Four must carry the stretcher. But Natrix only needs one companion to get to a safe place. That's still needed for now. Other robots also took part in the demonstrations - ones who accurately depicted the battlefield on the screens of the command center while flying. Those in computers performed functions that were invisible and incomprehensible to the majority. A bunch of live soldiers also arrived, arriving on a six-wheeled quadricycle and a coupled mobile platform. It was developed by the company LV-Teh and the inventor was Uģis Svirido. He is also a national guard. And the paradox is that during the demonstration, the heavy Browning machine gun on the battlefield was moved to positions by both this simple mobile platform, which costs perhaps 20,000 euros as a prototype, and the Estonian-made robot, which is worth half a million. In general, the cost of the small robotic, motorized armed unit that participated in the demonstration can be estimated in six figures.

Mechanics versus a super robot

Can the small mechanical platform be compared to the Estonian super-robot and if so - how? Both need a human, both provide unit and battle fire mobility. But the price of the platform is so low precisely because it does not use expensive technologies. One soldier at the machine gun, the other with the mechanical crank rotates the platform in the desired direction. While the driver of the six-wheel quickly takes the crew away from the point of contact when needed and delivers it to the next one. This is, of course, not a robot, but a quick and inexpensive solution to perform the same functions on the battlefield that are currently being attempted to be entrusted to robots. It is not for nothing that the allies are also interested in this solution. Uģis Svirido describes the platform as follows:

“We are not reinventing the bicycle. We are building a BMX out of a regular bike.”

Robotizing is also planned for this platform in the future, but in such a way that it still retains its most important advantage over foreign counterparts, namely low cost. It will be able to be controlled with remote control from a distance, could have a missile system, a grenade launcher, a machine gun, a stretcher, cargo placed on top - everything that may be needed on the battlefield.

Man-made robots - that is the very near future of warfare. However, even in this future, the costs will always be weighed against the benefits. That, too, shows wisdom.