If the disobedient can be beaten in Australia, here it is even more so

Videos are circulating on social media in which Australian police brutally deal with people who have allowed themselves to appear in public without a face covering – the burka of 21st century white people. These videos clearly demonstrate the mental brotherhood of all people, regardless of race, religion or sexual orientation.
29.09.2021. BLBens Latkovskis 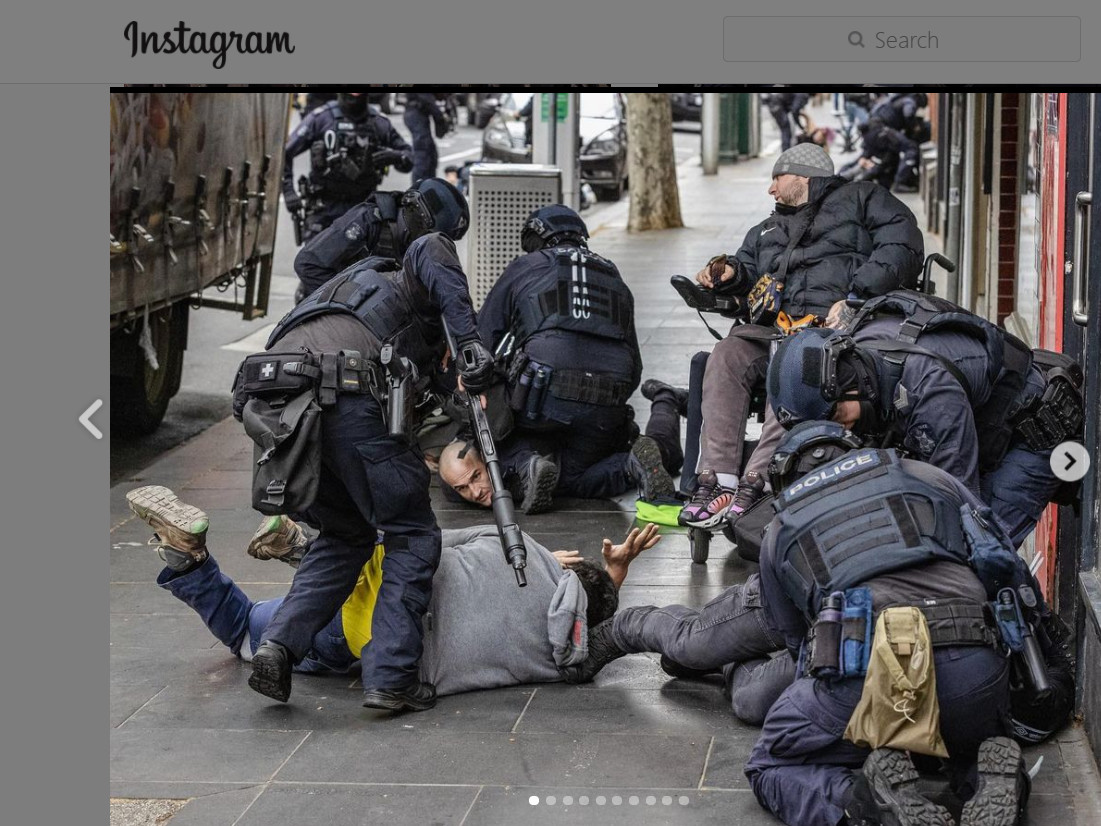 If at some historical stage in the development of civilization the Taliban methods seemed something archaic and unacceptable to Europeans, then now this mistake of social evolution has been rectified, and we are all moving in the same direction. Those who do not want to obey the orders of power are dealt with harshly and without excessive sentiment. With loud cheers from the surrounding crowd. Both in Kabul and Sydney.

I assume that the aim of those who post these videos of police brutality was to provoke the outrage of fellow human beings - this is the result of sorting, inciting people and shoving the principles of humanism deep into the very back of the drawer. Fascism, Lukashenko, apartheid, George Floyd and Derek Chauvin - some outraged people comment on these videos. But the result is quite the opposite. These videos do not deter anyone from making undemocratic decisions, but on the contrary - encourage our local Taliban from Brīvības Street 36 to take more action. Why?

Because the homo vulgaris always "votes" for beating those who act or think differently from him. Because the laws of entropy have not yet been repealed by anyone. Civilization must be maintained. In order to maintain it, however, an effort must be made, while the savagery comes on its own, as soon as you no longer put in the effort. As soon as you don't force yourself to do something. As soon as we give in to natural instincts, we start sliding back down the slope into the woods. Into nature, where people walk in palm leaf skirts.

Before we move on to discussing the decisions of the Kariņš government, a few words about the seemingly absurd comparison of our civilized government with the dark, archaic Taliban regime. The thing is that this regime seems dark, archaic, misogynistic and antihuman only from our point of view. If one thinks that the Taliban are malevolent villains who dream of the victory of darkness over light, then he deceives himself with complacency.

The Taliban, just like our Krišjānis Kariņš, Olivere Everte and the brigadiers of the social mobbing, are completely convinced that they are fighting on the side of divine light, for all that is good, against all evil. The only problem is that everyone has their own understanding of light and darkness. Some seem to think they bring the light of civilization, others see in it various satanic motives and the inclinations that the Western man, according to the Taliban, has succumbed to, and with whose hands the forces of darkness want to push their land and people into the kingdom of hell.

Even in the Western culture itself, there is no common understanding of light and darkness. For example, for some the public demonstration of various physiological activities is light, for others it is darkness. If we start a discussion here about whether, my apologies, pooping (defecating) on a theater stage is good or bad, then thoughts would be divided. Who knows when “high art” turns into simple sh*tting! But what about having public sex? In the theater? On TV? In the park? How public? In what position? Oral? Anal? Here we can go very far and get lost completely in trying to understand light and darkness.

What do I want to say with all this? Only the fact that an excuse to hit someone that warms one's self-confidence can always be found - makes one feel warm and fuzzy. I hit him only for his own sake, for the sake of the others, for the sake of all humanity. So that he does not do bad things. For a better future. Some hit with rubber batons to supposedly save lives, while others have an even greater purpose: to deliver those poor people eternal happiness in the kingdom of heaven, as opposed to those who will burn forever in the fires of hell. If these goals seem incomparable to someone, then it is only his own problem - the inability to look at things from different points of view.

All this philosophizing is, of course, due to the government's decision yesterday to increase pressure on Covid dissidents. Against those who do not accept the new Covid faith. What has this got to do with those Australian videos? Only that our politicians are like children from the point of view of social development. In the sense that they cannot initiate anything meaningful on their own. They need to follow the example of someone bigger, "an adult". Both good and bad examples. Any. It is likely that people would still smoke in our clubs and cafes if an extensive anti-nicotine campaign was not launched "abroad" and they didn't make laws banning smoking indoors. If they are doing it "abroad", then our bumpkins are doing the same. This applies to all new ideas. Only if they do it "abroad" will we follow them.

In other words, videos of the brutality of the Australian police only encourage our bumpkin imitators to do the same. Perhaps not literally so, but in any case, it encourages stretching the limits of acceptability. As smart people say, the world is developing in a spiral, and it seems that Covid has pulled the world in a downwards spiral. It can be said as a consolation that this would have happened sooner or later, with or without Covid. Covid has only hastened the process considerably.