Wandering bears in Zvārtava, Valka and Vijciems parishes will probably have to be eliminated because they endanger the local population with their behavior that is atypical and uncharacteristic of wild animals. Some houses have already been abandoned due to bear raids. If the fearless bears will have endured tonight's challenges with noise and light grenades and won't leave human settlements, the Nature Protection Board will issue a permit to kill the bears. An important note - in a situation where human life is at stake, a bear can still be shot even now. It may have already been done.
02.10.2021. Imants Vīksne 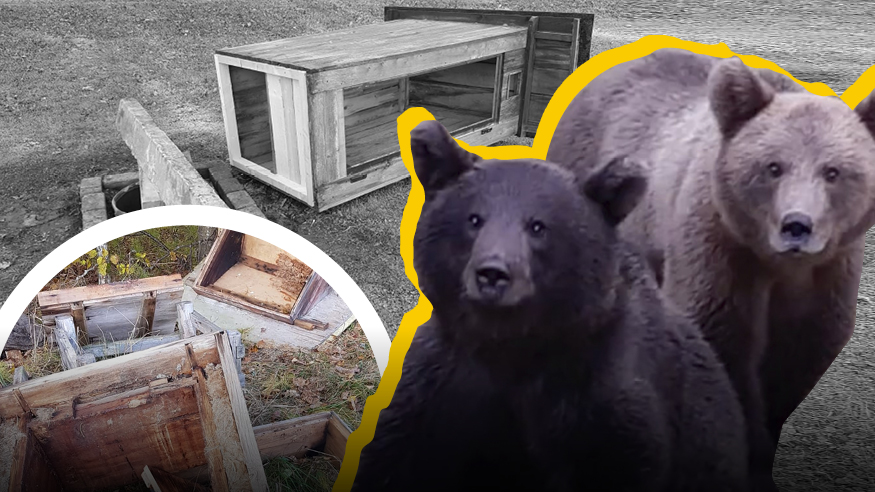 In principle, the brown bear is a non-hunting animal listed in the Red List, therefore the Nature Protection Board is responsible for the management of the species, not the State Forest Service. The population of Baltic bears is currently growing steadily, and bears are here to stay in Latvia. It is estimated that we have about 60 of them living here, and people must learn to live with the presence of this predator. However, if this presence becomes uncharacteristic of wild animals, radical solutions are needed.

Bears don't get scared, but people do 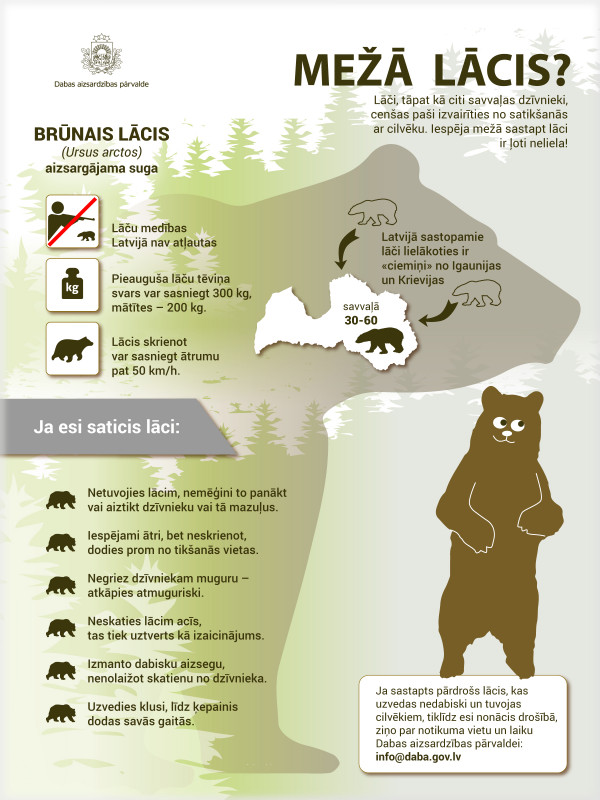 The situation in Valka region was explained on Friday at a public meeting where representatives of responsible environmental institutions and local governments gathered. Also a couple of radical animal rights defenders. To them, while living in Riga, these particular bears look cute, lovely and gentle. But people in Valka region are afraid to return home after work. Valkian Aivis Kalniņš says that a bear broke the steel latch of the shed in which he kept his garbage container. Their power is enormous, and they have no fear. The bears are already accustomed to the sound of a shotgun. They run off for a bit and quickly return to the compost, apple tree, hive, car - whatever interests them. The mayor of Valka region Vents Armands Krauklis says that about ten farms have experienced safer bear visits, but six houses are regularly visited and destroyed. Specialists of the Nature Protection Board identified two groups of bears on the spot. One has three bears - a mother with two teenage bears. They are more cautious and approach people's homes and other objects at night. They are also afraid of noises. People will have to live with these bears for a while, probably. But the biggest problems are with the other two young bears, who do not feel any fear, but eternal hunger and huge curiosity.

Someone tamed them and threw them away

Experts are convinced that both came from Estonia and used to live with humans. Apparently, the mother died or, disturbed by logging, left the winter nest with all the little bears. And an irresponsible man took the beasts home as fun pets, but when the bears grew up, he let them go off in the wild. In principle, such conduct is criminal.

Both bears are permanently damaged - they can't find food in the wild and come to people because they are not scared. People are the ones who are scared.

The Nature Protection Board has issued a permit to Valka local government to organize the activities of scaring bears - using the police or the army, the animals will be scared with noise and light charges. Probably also rubber bullets. In the forest, away from populated areas, there will be food left for them. However, experts do not have high hopes for this plan. In the meantime, the bears will be scared away from one house, go to the feeder and then in a good mood will go to play at other houses. And you can't keep chasing those beasts around forever. If the animals do not go to the forest today or tomorrow, they will be shot.

A long-term solution is needed

The Nature Protection Board has also discussed the possibility of capturing bears and placing them in zoos in Riga, Kalvene or Līgatne nature trails. However, such a possibility was rejected, because in Riga the old bear house is being demolished, in Kalvene there is enough space only for the existing three bears. There is no place to do quarantine in Līgatne before introducing the new bears to the existing ones. Estonians do not want to take the bears back, they do not stand on ceremony with dangerous animals in similar cases. If necessary, they shoot them, and they have recommended the same to Latvian colleagues. Animal rights defender Jeļena Rumjanceva said at the meeting that there were bear shelters in Germany and Russia. That's true. However, even if a place for them is negotiated, transporting a wild animal abroad is an event that takes a lot of planning. But something needs to be done right away with both dangerous bears. We can't wait for them to hurt or kill someone.

The mayor of Valka acknowledges that at the national level, there is also a need to start thinking about setting up rapid response teams and temporary accommodation for the bears. If bears as a species are here to stay in Latvia, ways must be found to deal with emergencies.

The inclusion of bears in the list of animals that can be hunted is not planned, the brown bear will continue to be a protected non-hunting animal. However, in the emergency situation that has now developed in Valka municipality, a radical solution is needed. It will be for the benefit of humans and also the whole bear population.