The defendants in the Lembergs case have requested on appeal, as required by the Criminal Procedure Law, to examine the evidence and to question a number of witnesses who the court of the first instance refused to call for questioning.
08.10.2021. Uldis Dreiblats, Ritums Rozenbergs 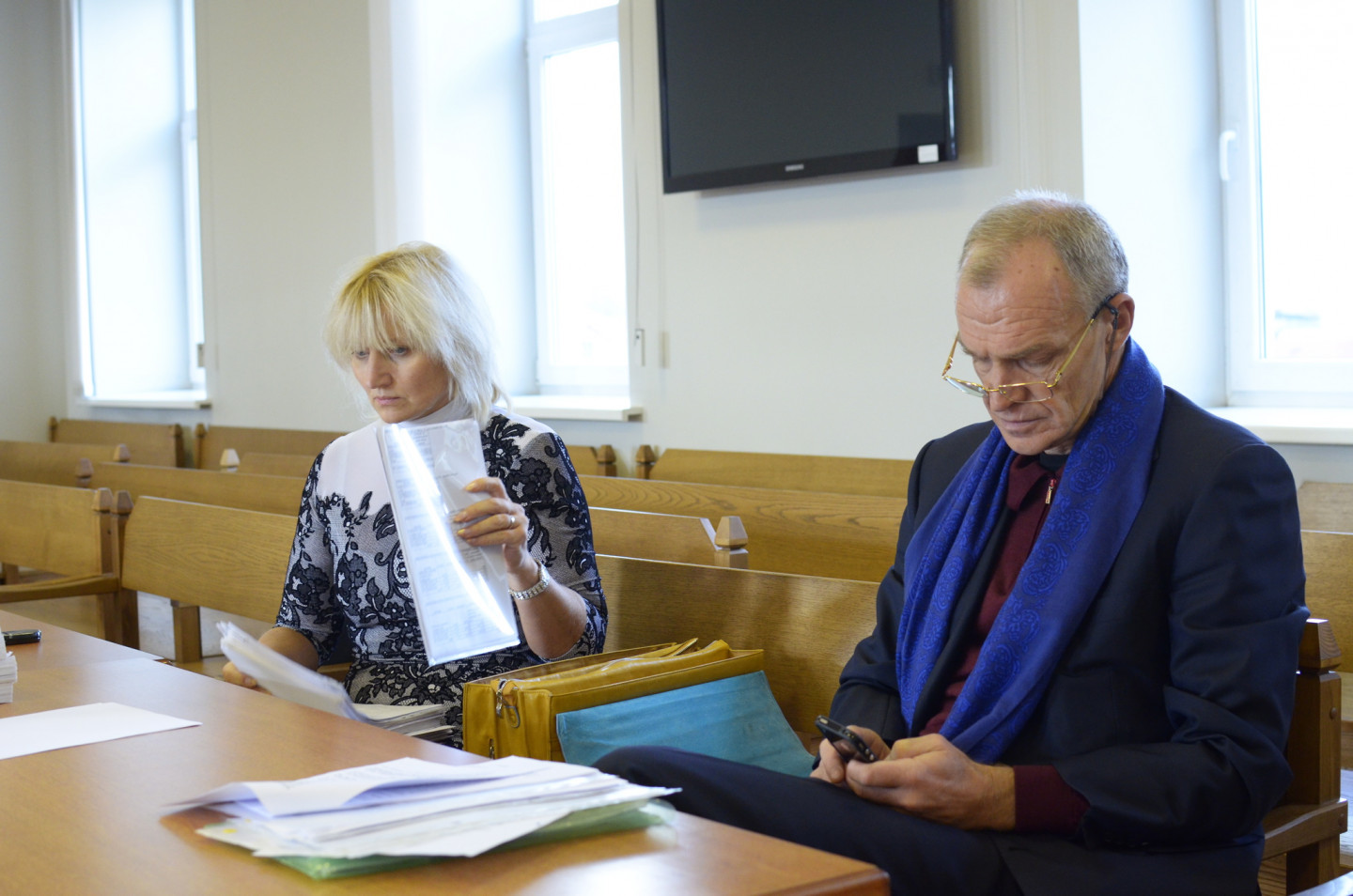 A MOCKERY OF WITNESS EXAMINATION. Millionaire Ainārs Gulbis answered only the questions of prosecutors in court, which were probably prepared in advance - this is evidenced by the situation recorded in this photo in the courtroom, where Ainārs Gulbis' representative Ineta Malahovska selects documents on which he will be questioned. After answering the prosecutors' questions, A. Gulbis for a short time basically pretended not to understand the questions asked by the defense, and when the court hearing was adjourned, he went off into the sunset, where he could no longer be found by the Latvian law enforcement and could only be found by the yellow press. Despite this obvious mockery, the appellant judge now considers that this gentleman has already been questioned sufficiently and adequately. ©Emīls Desjatņikovs/F64

Judge Sandra Amola has already rejected the request to call witnesses for questioning.

As already written, based on Section 12 of the Epidemiological Safety Measures for the Containment of the Spread of COVID-19 Infection, the judge has also ruled that a criminal case is to be heard on appeal in a written manner.

However, the participants in the proceedings may still submit requests for the hearing of the criminal case to take place in a spoken manner, and they will probably be submitted, as all the accused and their defenders have previously requested to hear the case in spoken rather than written proceedings.

It should be reminded that the court of the first instance also did not allow Aivars Lembergs to ask any questions to the most important witnesses (Rudolfs Meroni, millionaires Ainārs Gulbis, Jūlijs Krūmiņš, Olafs Berķis, etc.).

The defense was also significantly limited in their interrogation time, and many witness interrogations were interrupted (the term "overterrogated" even appeared in the process, and there were quite a few "overterrogated"). The defense was prevented from asking any questions on a number of very important topics, which prosecutors then used in their indictment (for example, the way millionaire Ainārs Gulbis' companies settled their debt to Ventspils nafta in the 1990s).

A total of 100 prosecution witnesses were questioned in the court of the first instance. By contrast, of the defense applicants, the court allowed only three witnesses to be questioned.

Aivars Lembergs has publicly mentioned this witness ratio of 100:3 several times, which very clearly reflects the court's attitude towards the rights of prosecutors and the rights of the defense.

But the European Convention for the Protection of Human Rights and Fundamental Freedoms states:

"Everyone charged with a criminal offence has the following minimum rights to examine or have examined witnesses against him and to obtain the attendance and examination of witnesses on his behalf under the same conditions as witnesses against him." This is considered to be a very important principle of the rights of the defense.

Only Meroni's opinion on the property

There is no doubt that this apparent disproportion was the reason why A. Lembergs asked for several dozen witnesses to be summoned to the Court of Appeal, apparently hoping that the injustice would be remedied at least in the second instance. Expectations turned out to be in vain.

Judging by the surnames, A. Lembergs wanted six Latvian citizens and 30 foreigners to be questioned. At one time, A. Lembergs stated in interviews that only Rudolfs Meroni's cooperation partners were invited to testify in court at the initiative of prosecutors. Accordingly, of course, they also more or less confirmed R. Meroni's versions of ownership (admittedly, even these witnesses did not always confirm R. Meroni's versions), which is a key aspect of the mentioned criminal proceedings, as dozens of foreign companies have been arrested and subject to confiscation, which in turn own shares and capital shares in large Latvian companies. R. Meroni is basically acting with this seized property as his own - transfers to politicians of the ruling parties have also been found.

Most likely, the foreigners A. Lembergs wanted to call to testify are lawyers or financial intermediaries who are related to foreign companies involved in the criminal case but are not R. Meroni's cooperation partners.

What can the prosecutors tell us?

Aivars Lembergs has asked in the appellate instance to question three prosecutors who have participated in the investigation of Lembergs case - Anita Cēsniece, Juris Galejs and Andis Mežsargs.

A. Cēsniece was the first prosecutor who, more than 22 years ago, began investigating the case in October 1999, which later got the name of Lembergs case. A. Cēsniece (who very recently retired - a month ago) closed the case against A. Lembergs, however, the case was reopened as a result of all political peripetias.

In turn, the criminal case was referred to court in 2008 by prosecutor A. Mežsargs, who retired in 2013, and, as is clear from his interviews with the media, it was not voluntary - the burden of the suspicious relationships he maintained proved to be too heavy.

Consequently, it is likely that only J. Galejs is still working in the prosecutor's office, but he made some procedural decisions at the very beginning of the mentioned criminal case.

The court favors some millionaires

A. Lembergs has also asked the appellate court to invite millionaires Jūlijs Krūmiņš, Ainārs Gulbis and Oļegs Stepanovs to testify again, because their "time for questioning had been limited".

To say that for these three key figures in Lembergs criminal proceedings, the "time for questioning had been limited" is very diplomatic wording, because everything was done to ensure that the defense never got to decently question these gentlemen at all.

Namely, both Jūlijs Krūmiņš and his friend Ainārs Gulbis came to the court to answer the questions asked by prosecutors - clearly prepared in advance, because they had one legal aid provider - the former judge Ineta Malahovska, who had prepared a pile of documents for both of them about the questions to be asked.

But when the defense began to ask questions, the two became entangled in extreme contradictions. It soon turned out that one had to go to Australia, but the other was not in good health, and they have not been seen in this criminal case again.

Even the police could no longer find them when the court formally ordered the two to be forcibly brought forth. The police could not find them, but the yellow press did - one showed off his properties in Jūrmala and Sigulda to the journalists, told them how many cigars he smoked a day; the other showed his power to the servants of the world's tennis courts and got entangled in a loud love affair in Tenerife.

On the other hand, it was during the interrogation of O. Stepanovs, when it was obvious that the millionaire did not like the questions asked by the defense, that the limitation of the interrogation time was announced for the first time.

Was there really a chance?

Ansis Sormulis' lawyer Jānis Rozenbergs also asked the appellate judge to invite and question witnesses, who the court of the first instance refused to call and question - eight Latvian citizens and seven interpreters.

Anrijs Lembergs' lawyer, on the other hand, wanted to question eight foreigners, probably for the same reason mentioned above - almost only R. Meroni's cooperation partners were questioned in the court of the first instance.

Notwithstanding the provisions of the Convention on Human Rights and the above-mentioned facts, Judge S. Amola ruled: “Assessing the requests of the accused Aivars Lembergs for the examination of witnesses, the judge concludes that some of the witnesses were already examined at the first instance court hearings, while the requests for summoning and questioning other witnesses were decided (rejected) in the first instance court. The request for summoning and questioning of witnesses submitted by Jānis Rozenbergs, the sworn advocate of the accused Ansis Sormulis' defense counsel, was also decided in the court of the first instance. The request made by the sworn advocate of Anrijs Lembergs' defense counsel Oskars Rode for the summoning of witnesses has also been filed repeatedly. The question of the examination of these witnesses was decided before at the Court of First Instance. According to the judge, given the length of the proceedings at the hearing at first instance, the parties had the opportunity to make reasoned requests to call and examine witnesses, as well as to exercise their rights and ask witnesses questions. The judge acknowledges that the set of materials collected in the criminal case is sufficient to hear the case on appeal and the request to invite witnesses to the hearing of the appellate court must be rejected. Rejecting the requests of the accused Aivars Lembergs and sworn advocates, Jānis Rozenbergs and Oskars Rode for calling witnesses, the judge draws attention to the fact that the court is not bound by the opinion of the persons involved in the proceedings about the need to obtain specific evidence. Referring to the decision of the Senate of October 6, 2020, in case no. SKK-77/2020, the judge points out that the decision on the sufficiency and reliability of evidence is within the competence of the court and only the court can determine which evidence is relevant in determining the material circumstances of the case and which is not.