The story of Nikolai Yakunin, a general of the Red Occupation Army exhumed in Madona, took an unexpected turn. The general's remains, prepared for reburial, are located in the morgue of Madona Hospital, a new grave has been excavated in the Red Army cemetery, a new monument has been erected in the cemetery, but the reburial will not take place. The Russian Embassy has canceled the event.
08.10.2021. Imants Vīksne 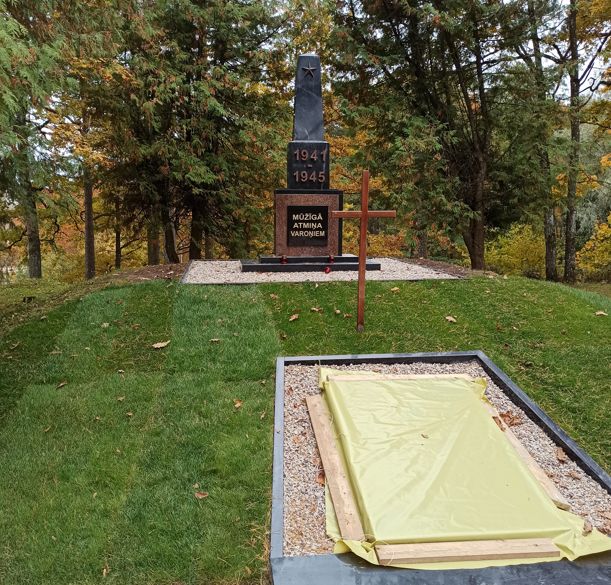 It is not difficult to predict the further course of events. The remains of Yakunin will be transferred to Russia for reburial. In Madona, a new monument to the occupation army will be unveiled in the Red Army Cemetery - even without the participation of the important deceased. And all this will be accompanied by a stream of lies about the resurgence of Nazism in Latvia. Three birds with one stone.

Russia has played Latvia in this episode of the monument war.

As Neatkarīgā has already reported, it was planned that "an important Red Army member will be reburied in Madona". The exhumation took place on August 26, but Yakunin has not been laid back to rest. The reburial rehearsal in Madona was to take place on September 27, and the ceremony itself on September 30. However, the Russian embassy canceled the event. It has not provided a public explanation, but, according to a letter from the Ministry of Foreign Affairs of the Russian Federation that Neatkarīgā acquired, the successors of the general have applied, who want him to be reburied in his homeland. The letter was addressed to the head of the Orenburg branch of the Russian group who searches for the fallen, and then it traveled to Latvia. The document can be viewed here.

The narrative about the rebirth of Nazism

Russia has played a double game in this story. On the one hand, the embassy itself had agreed to the exhumation of the general, but on the other hand, the exhumation has already been and will continue to be used in the Kremlin media to discredit and accuse Latvia of rewriting history. Recently, a wide story about the resurgence of Nazism in the Baltic States was shown on the Russian TV channel NTV. Its main focus was on the unveiling of a monument to the national partisans in Estonia. And the accompanying text is as follows:

"It is this alternative history that is currently being promoted in the country. The Red Army was not a liberator, but an occupier. The heroes are now those who fought not against the Nazis but against the Communists. The Forest Brothers stand out in this respect - during the war they fought against the Soviet army and were Nazi supporters." Meanwhile, daily shots from the plenary hall of the Latvian Saeima are shown on the screen. This is followed by a huge stream of lies about the fact that the Forest Brothers massacred the locals, raped women and ate all the food. And behold, in the continuation of the story, it is also the turn of the story about Nikolai Yakunin, who "fell in the struggles for the liberation of Latvia".

Soviet hero - tossed in the morgue

The story tells that the "local nationalists" have managed to get the general exhumed and the burial place at the Madona local school has been eliminated. And here's the explanation given to the Russian public as to why the Russian embassy agreed to the reburial: "Under the conditions when anti-Sovietism has become modern Latvian policy, leaving Major General's remains in the schoolyard where students are told about the so-called Soviet occupation would be disrespectful. Although what kind of respect can we talk about here if the murderers are turned into new heroes?”

A new and unexpected twist has just taken place, as the Russian Federation itself no longer wants to allow Yakunin to be buried in the already excavated grave in the Soviet soldiers' cemetery in Madona. However, there is no doubt that this fact will be used to circulate the narrative of the resurgence of Nazism, which is good for Russia. See, a Soviet hero, pulled from the grave, tossed in the city morgue for months. In the aforementioned story, an activist of Soviet history, Alexander Rzhavin, who has apparently been entrusted by Russian special services with Latvia, regrets the fact that Yakunin is being reburied for political reasons. He does not talk about the fact that the dead should rest in the cemetery, not in the children's playground.

At least the school is freed

At present, the municipality of Madona is in a rather conflicting situation. Although located in a cemetery, a completely new monument to Soviet-occupied troops has basically been erected in the city. There is no name of Yakunin on the monument - so it is not personalized and dedicated to the specific soldier, but to all the Red Army soldiers - the occupiers of Latvia. Above there is a text in incorrect Latvian: Eternal memory for heroes.

What will happen next with the remains of Yakunin is still unclear in the municipality:

"An application has been received in Madona municipality from a natural person regarding the transfer of the remains of Major General N. Yakunin to Orenburg for reburial there. The reburial procedure has been postponed indefinitely until further action is clarified. The reburial process is organized in accordance with the procedure specified in the intergovernmental “Agreement between the Government of the Republic of Latvia and the Government of the Russian Federation on the status of Latvian burial sites in the territory of the Russian Federation and Russian burial sites in the territory of the Republic of Latvia”.

At present, the remains of N. Yakunin are in the cold rooms of the morgue."

So far, Madona's only benefit in this protracted story is that the front of the school has been freed from the burial place of the occupying army general.

Adults no longer have to justify their children, why the person who took part in the destruction of Latvia's statehood is being honored in front of the school.

Where the tomb, stele and greenery in the style of the Soviet army were located for decades, grass is now sown.