Only the legislator - the Saeima - can be complained to about the prohibition to follow the trial of Aivars Lembergs in the appellate instance - Pāvels Gruziņš, former Chairman of the Criminal Cases Department of the Supreme Court and Deputy Chairman of the Supreme Court with 32 years of experience as a judge, explained to Neatkarīgā, analyzing the decision of Judge Sandra Amola regarding the trial of the Lembergs criminal case taking place in a written manner.
11.10.2021. Uldis Dreiblats, Ritums Rozenbergs 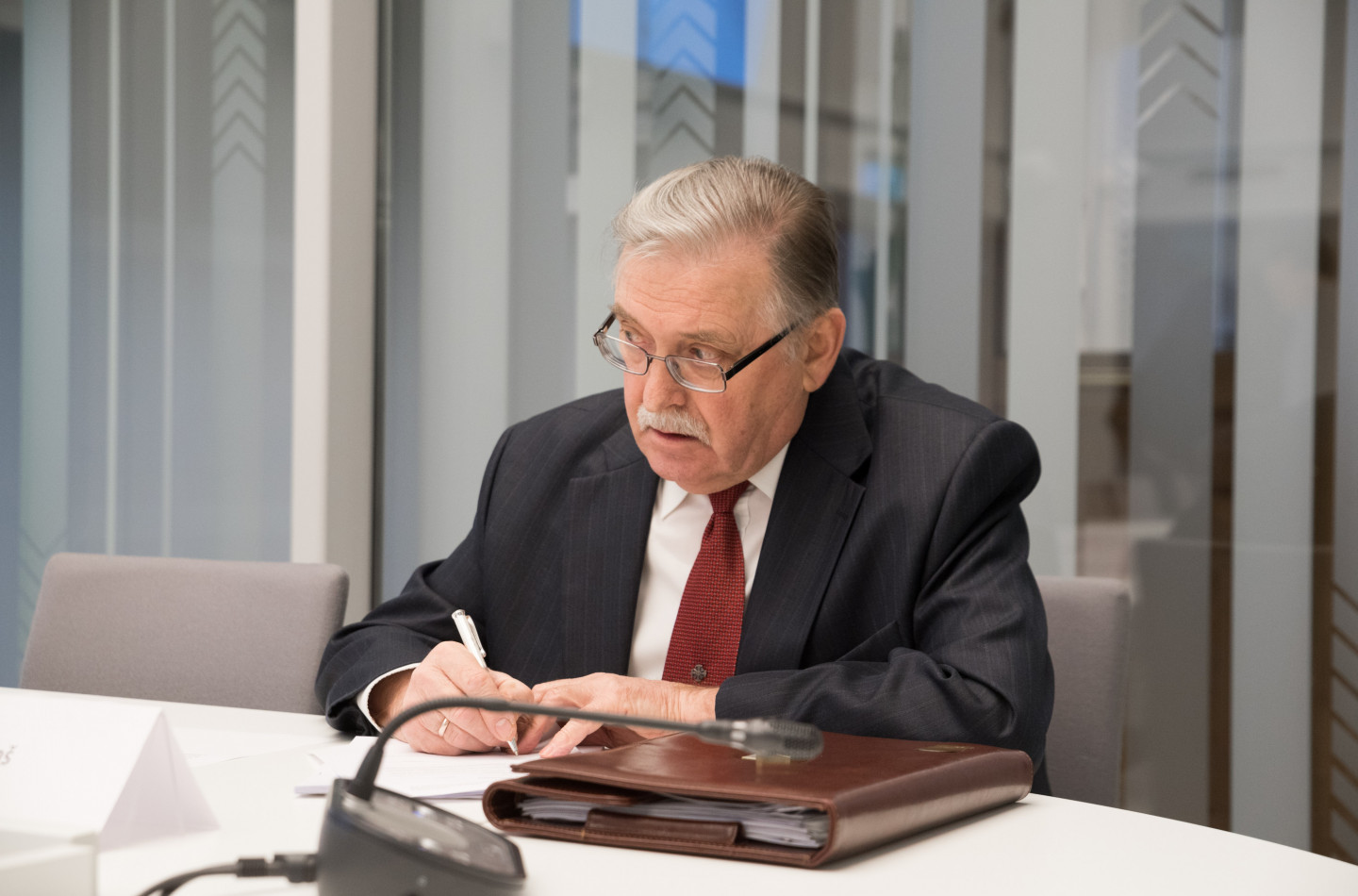 Lembergs criminal case can be heard on appeal in a written procedure thanks to the Law on the Management of the Spread of COVID-19 Infection passed by the legislature. In a situation where the public is prevented from following the trial process, the judge must rely on an independent, objective assessment of the case file. The fairness and impartiality of the court will be visible only on December 21, 2022 - such opinion was expressed to Neatkarīgā by the former Chairman of the Criminal Cases Department of the Supreme Court and Deputy Chairman of the Supreme Court Pāvels Gruziņš (pictured) ©Vladislavs PROŠKINS, F64 Photo Agency

As is known, based on Article 12 of the Law on the Management of the Spread of COVID-19 Infection, the judge of the Riga Regional Court has decided that the Lembergs criminal case should be adjudicated in a written procedure. The written process means that the public will not have any opportunity to follow the trial of A. Lembergs and two businessmen - Anrijs Lembergs and Ansis Sormulis.

Although the participants in the proceedings may still submit motivated requests for the hearing of the criminal case to take place in a spoken manner, it will become clear very soon whether these requests will be taken into account.

Concerns that a hearing that the public cannot follow may not be fair are caused by the human rights violations committed in the court of the first instance, such as not allowing the accused to interrogate prosecution witnesses, rejecting requested defense witnesses, imitation of checking the written evidence, frequent interruptions of the defense speech.

Respectively, the case materials on which the court will base the written procedure do not create an objective picture of the case.

"That is the law"

Evaluating the court's decision on the written procedure, P. Gruziņš said: “If I were a lawyer, I would have no objections to the decision. The judge has given reasoning for this. Another question is how complete or incomplete this reasoning is. The judge based her decision on a special law that cannot be appealed. It is important that the judge's decision also provides an answer on the security measure applied and states that it may be reviewed every two months. As far as I understand, there is a long deadline for announcing the appeal decision - December next year."

Asked what to do for the part of the society that wants to follow the trial of the popular politician, P. Gruziņš answered: “That is the law. It is necessary to turn to the legislator - the Saeima. Until now, in addition to the special Coronavirus law, the Criminal Procedure Law also included provisions that a criminal case may be judged in writing. There is no longer room for interpretation. The special law has been adopted. The public wants to know little in such a situation. Another question, when will this Covid law be repealed? It might one day be repealed if it is established that the pandemic no longer exists."

Asked on what basis the public can trust on a fair trial in the written process, P. Gruziņš replied: “One party will always say that the court is fair. In the specific case, the prosecution will say that the court is fair because the law provides such opportunities for the court to adjudicate the case in writing. The process is not being violated. And if the process is not violated, then there are no other questions. Another case is how it could be assessed by the Constitutional Court. However, here we come to the same thing again, that there is a state of emergency and the norms of a special law, which conform with the Constitution. In a state of emergency, the public interests can be limited, and in such a situation there are exceptions where the proceedings cannot be viewed by the public. We will be able to find out how the people have been tried after the appeal decision has been announced. In the current situation, the public cannot follow not only the case you mentioned but also other court cases. The question is - is it right? But there is a state of emergency and an emergency law. What to do in such a situation - frankly, I do not know. That is the situation."

Asked how the judge can be so convinced that the witnesses requested by the defense should not be heard, P. Gruziņš pointed out: “Apparently the judge has read the case materials and seen what is in them. It is the judge's prerogative to assess the sufficiency of the evidence and its relevance. This is a matter for the court alone. What will be the result - no one knows yet.”

It is worth recalling that the case has more than 300 volumes, the verdict is on 2,000 pages, and the interrogation of 103 witnesses has been recorded in audio recordings from several hundred court hearings and no one has tried to calculate their length yet (several witnesses were interrogated for months). Judge Sandra Amola received the criminal case two and a half months ago on July 27.

Speaking about the doubts that the decision of the appellate instance could have little objections to the judgment of the first instance, because the judge Irīna Jansone, under whose leadership the judgment was made, is now the boss of the judge preparing the appeal, P. Gruziņš said: “This is an assumption. It should not be like that. That would be as wrong as what the Minister of Justice Jānis Bordāns did, telling the court which decision would be the correct one. Such a telling-off from Bordāns to the court may be grounds for recourse to the European Court of Human Rights. The court is affected by it. If we are talking about the above case, there is still no reason to think that the court may not be independent. This is just your assumption. Society often also demands the death penalty, but should the court therefore obey public opinion? However, there are courts that follow public opinion, pressure from the media. I am not saying that much of the first-instance judgment was influenced by the mass media - television and others - except for one newspaper, you know which one. There are judges who succumb to this pressure and are afraid. A judge of Limbaži was not afraid to adjudicate independently in the Magonis criminal case. The judge was not afraid of receiving blowback. He stuck to his point. Afterwards, this earned him a telling-off from Bordāns. If a judge is unable to remain independent, they can no longer work as a judge. This Minister of Justice is trying very hard to influence the judges. That's how it is."