There will be barbed wire on the border by winter

Far away from Riga, the migrant crisis is continuing, and, although Covid overshadows it, border guards and soldiers drive migrants away from the Latvian border every day with threats, intimidation and physical force. Not everyone is deterred from committing a serious crime - unauthorized crossing of the green border of the Latvian state. It is therefore necessary to create a physical barrier as soon as possible to stop the criminals. The Ministry of the Interior promises that by the end of November, the barbed wire fence will cover all critical areas.
14.10.2021. Imants Vīksne 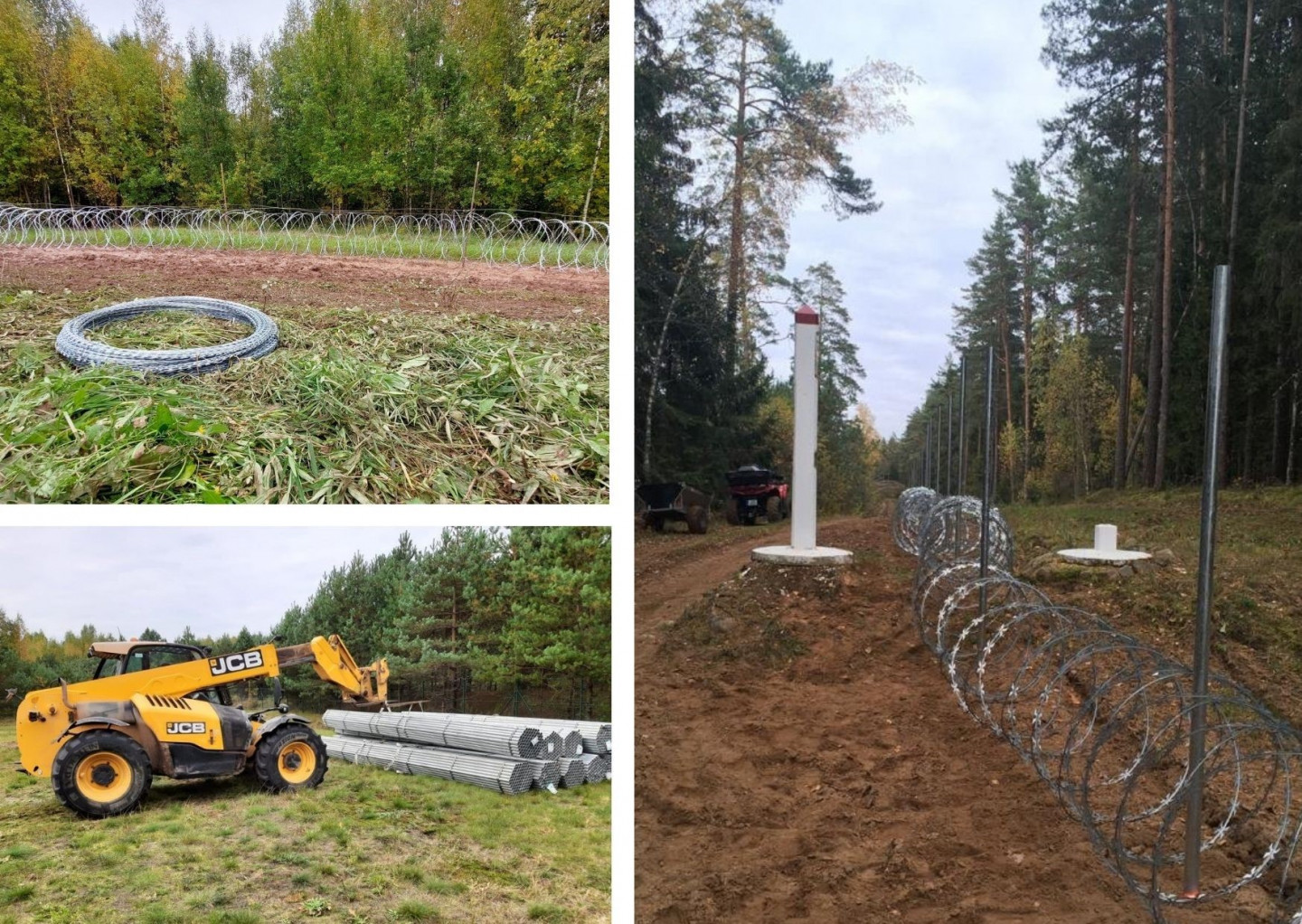 Of course, no fence provides a one hundred percent guarantee. The fence can be cut with pliers, it can be climbed over using a ladder and a thick cloth. When such equipment is not available, barbed wire is a very effective barrier that snags clothes and makes it almost impossible to get out of it without injury. Each razor clings to shoes, pants, sleeves, and right next to it is the next roll of barbed wire.

They come every day

The existence of a fence in itself can deter criminals or at least delay them, and in such a situation time is vital for Latvian border guards and soldiers. When an attempt to enter the territory of Latvia is detected with a drone or any other means of remote monitoring, there will be more time to get to the scene of the incident and intercept the criminals.

For several months now, multiple attempts to enter the territory of Latvia illegally have been prevented every day. Larger and smaller groups of migrants are trying to enter unnoticed from Belarus. Those who are intercepted try to apply for asylum, but these rights are restricted due to the state of emergency declared at the border. And yet some manage to get an official permit to stay in Latvia temporarily. Formally, this is detention for humanitarian reasons. Neatkarīgā has already explained the mechanism used by criminals to abuse European human rights principles. They take living shields with them, i.e., if a migrant group has a sick person, a child or a disabled person, the whole group is admitted on the basis of allegations of kinship.

111 kilometers must be set up

Six people were detained on Monday for illegally crossing the state border. For humanitarian reasons, these people were not prevented from crossing the border. This was reported by the State Border Guard with a delay of one day. In addition to these six, 23 more people tried to enter Latvia but were stopped and remained on the Belarusian side. Of course, there are no statistics about the criminals who manage to enter Latvia unnoticed. It should be noted that the current pushing of migrants back and forth on the Latvian-Belarusian border is a very dangerous situation, as there is a risk of military incidents. There are armed people on both sides of the border, and someone might lose their composure. There have been a number of incidents and provocations by Belarusians on the Polish border. Such things are also possible on the Latvian border. That is also why a fence is needed as soon as possible, and it is finally being built in Latvia as well. The Ministry of the Interior reports that the construction of the temporary fence started on October 6. The total volume of barbed wire to be delivered is 111 kilometers. The total funding required for the construction of the temporary fence is 3,757,531 euros. The amount seems huge, but all materials on the market have risen in price, especially metal. As a matter of urgency, the construction of a 37 km temporary barbed wire fence will be ensured in the most important sections of the border. The first 17 kilometers of barbed wire fence were delivered on October 7, another 37 kilometers will be delivered by October 14, 36 kilometers by October 22, and the remaining barbed wire is planned to be received in early November. They will be supplied by companies DN Sistēmas and Aimasa. Aimasa will also provide setting up the temporary fence.

As for the permanent fence - a metal lattice fence with barbed wire at the top - the old letter of intent with the builder involved in the criminal proceedings is no longer considered binding by the Ministry of the Interior. New procurement will be organized for the construction of the 134-kilometer border at some point, but for the time being “together with experts from other ministries, the Ministry of the Interior is actively working on solutions to implement the project as quickly and legally as possible. At the same time, the cadastral survey of state-owned and expropriated land units, expropriation of real estate, valuation of trees and removal of overgrowth are already taking place.” Earlier, the ministry announced that the construction and commissioning of the Latvian-Belarusian border was planned to be completed by 2024. This is too long a time and it has already been reprimanded in the Saeima. Here a reminder would be in place that the construction of the eastern border has been planned since 2013. First, the fence was being built on the Latvian border to stop the Russian and Belarusian wild boars to protect our domestic pigs from swine fever. It was then being built to stop the Vietnamese invasion and is now being built to protect us from Lukashenko-sent Iraqi hybrid soldiers. There is a permanent fence on the Russian border, but it has not been put into operation due to dubious criminal proceedings, while nothing has actually been done on the border with Belarus in eight years.

The absence of a fence can undoubtedly be assessed as political negligence, however, it is not only the Latvian governments and coalitions that deserve reproach. The European Union, as an institution, is not at all interested in what is happening at its external borders. The European Commission is not even ready to finance the construction of the fence, because the existence of such is not provided for in European legislation. It is as if Muslim crowds from Arab countries who are trying to enter the prosperous and peaceful Europe were a problem only for the individual states.

However, this attitude is likely to change, at least slightly, as there is a demand for solutions at the European level from those Member States facing the problem of criminal migration. Including Latvia. At the beginning of October, the European Union Justice and Home Affairs Council adopted a call signed by 12 countries to strengthen the Schengen area against the hybrid threat. Rather than responding to the consequences of a crisis, they will now adapt the legal framework before that. The document can be viewed here. At the Council meeting, the Minister of the Interior of Latvia Marija Golubeva emphasized that strengthening and protecting Europe's external border is not the task of each individual country, but a common duty of the European Union. However, obviously not all European Union countries see this and not all consider illegal migrants an economic threat and a possible source of terrorism. 15 EU Member States did not sign the call.

* Since the start of the state of emergency on August 10, a total of 1,641 people have been deterred from crossing the Latvian state border illegally.

* 44 people were not prevented from crossing the state border for humanitarian reasons.

* A total of 396 third-country nationals crossing the border illegally have been detained this year.

* It is not known how many people managed to cross the border unnoticed.