Unvaccinated firefighters went to the Saeima on Thursday to protest, but up to 30% of employees in other sectors of the interior department have not been vaccinated at the moment - border guards, police officers, prison staff. The government has decided that it would be better to dismiss them all on November 15 than to seek individual solutions to end the pandemic. There is a number of evidence at the disposal of Neatkarīgā that the disobedient employees are already being prepared for dismissal.
15.10.2021. Imants Vīksne 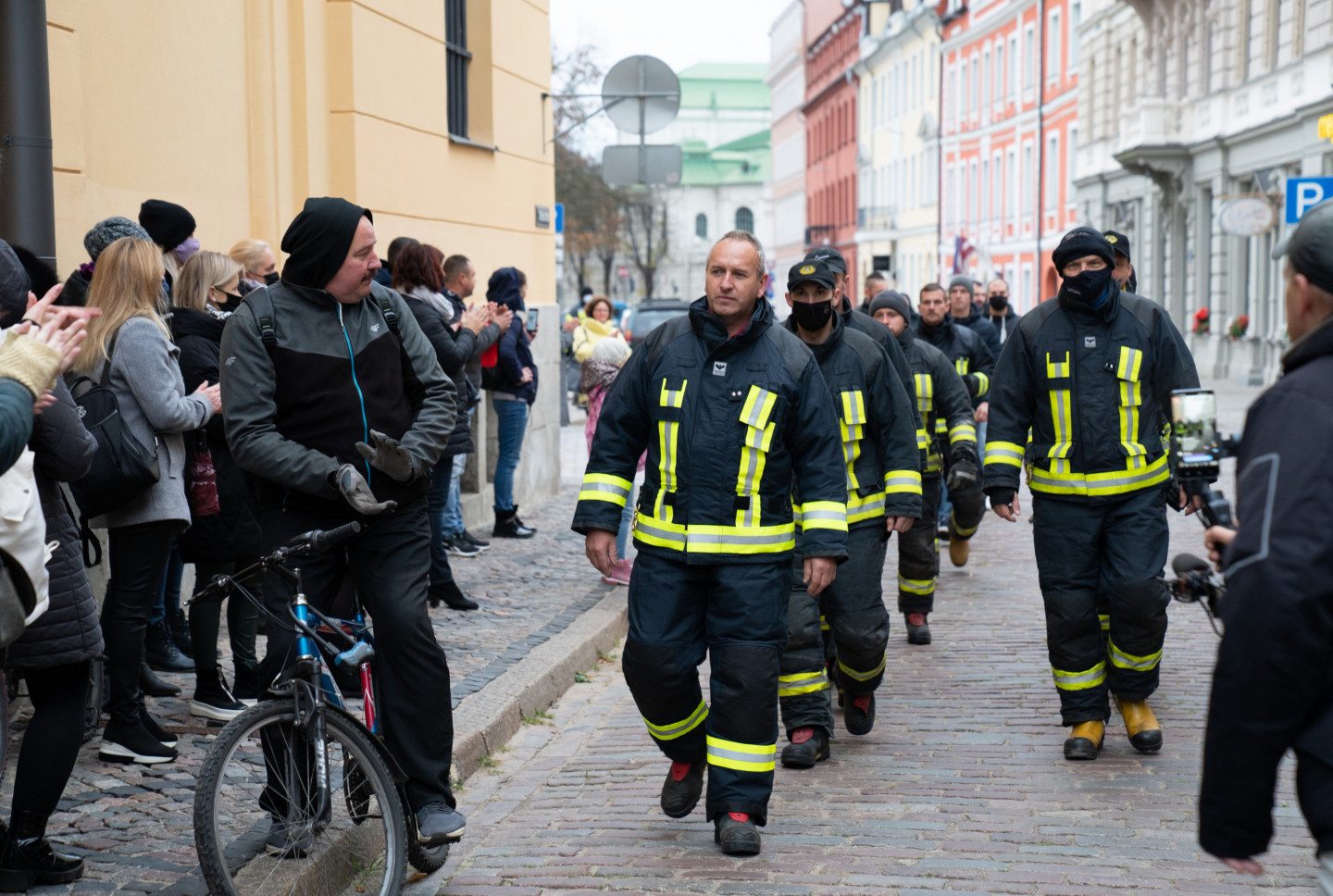 Many lawyers believe that this is an erroneous and possibly even illegal decision. This is the order of the Cabinet of Ministers no. 720 "On the declaration of a state of emergency". Paragraph 5.3. provides: "Employees and officials of state and local government institutions (including capital companies) may perform their work duties from November 15, 2021, only if they have a vaccination or recovery certificate." So no more testing, no more remote work.

Firefighters held a protest, lawyers had a discussion

Either you have a certificate and a job, or you have no certificate and no job. There is little time left to think. One month left. This can be called blackmail and intimidation by the government. The first line of blackmailed people includes heads of institutions who will be dismissed if they are unable to ensure the continuity of the institution's work, while the next line includes unvaccinated employees who are already threatened with dismissal if they do not comply with the vaccination order. Theoretically, vaccination against Covid is not mandatory in the country, but in practice, it is, because there is no other way to get a certificate than by vaccination. Of course, there is also the possibility of falling ill, and classifieds do offer services to infect others with Covid, but this should not be seen as a sensible way to keep a job.

On Thursday, while firefighters and other opponents of forced vaccination protested at the Saeima, members of the Latvian Lawyers Association, including heads of some associations related to the Ministry of the Interior, lecturers, lawyers, and representatives of various services, gathered less publicly. They discussed how to get out of this situation with the least possible harm to the interests of unvaccinated people. Neatkarīgā had the opportunity to participate in this meeting as a listener.

Two have already been repressed

It is said - there are as many opinions as there are people. There were both vaccinated and unvaccinated people among the lawyers who met. Each has its own reasons and considerations. However, everyone agrees that the government's intention to fire the unvaccinated on November 15 is a disproportionate measure that fundamentally violates the human right to do with one's body as one sees fit. The meeting was also attended by two people who have already been repressed for this. There is no point in discussing why they do not get vaccinated. Do not want, cannot or should not - that's it. However, they are already facing repression from the management. One is a border guard - a middle-level employee, the other is a lawyer working in an institution of the Ministry of Education and Science. More precisely, he worked, in the past tense, because at the end of the probationary period he was told that the contract would not be extended because he is not vaccinated. Why can't a lawyer review procurement documents remotely? Can't and that's it. From now on, both on-site and remote workers must be vaccinated. As if the virus was traveling through the wires.

The border guard is also not vaccinated. Management suddenly asked him to do Covid tests with his own money. He went to one pharmacy, then to another, he did not find the tests. Nor did he try very hard. Did not go to the laboratories. But without a certificate or a negative test, you are not allowed to visit even the country's green border. And if the employee is not at work, it is treated as an unjustified absence and grounds for dismissal.

Perhaps if it were just these two workers, the nation might not worry. If these two can't work, others will be hired. However, in the ​​home affairs sector, where there is already a shortage of staff, the dismissal of 20% or more of workers would mean a significant deterioration in national security. There are also professions where it is not possible to stop working immediately on November 15. For example, operatives who infiltrate criminal structures. They can't just say - whoops, my dear bandit gentlemen, I don't have the certificate to keep meeting with you.

Ironically, criminals are benefiting from the new protocol of Covid - the power of force structures will decrease. And now, in prisons, criminals still enjoy the privilege of not being sorted into vaccinated and unvaccinated. In contrast, people out in freedom are being sorted. Rihards Bunka, the head of the Lawyers Association, states that, at least in this respect, there is more freedom in prisons than out in freedom.

There is another solution

After hearing government blackmail and receiving threats of dismissal from direct management, the unvaccinated are trying to join industry unions - police officers, firefighters, border guards. They also turn to the Independent Police Trade Union. There, they are presented with two not-so-attractive alternatives: either to go and get vaccinated, or fight for reinstatement in court. Victory is semi-certain, because an employee may not be fired without coordination with the trade union. However, such a process will take some five to seven years.

Considering that it would be unreasonable to dismiss 20% and more firefighters, police officers, border guards and prison guards, the Latvian Lawyers Association offers politicians to consider another solution. Allow employees who do not have a vaccination or recovery certificate to use their accrued leave. And after that, let them go on unpaid leave, in the hope that the pandemic will end someday. Until then, some of them will already change their mind and get vaccinated.

But the main thing is to not lay off thousands of people from work on November 15.