The fate of 3.3 million from SIA Ventrans Rīga is unclear, which could turn out to belong to the state

Taking into account that the liquidation of SIA Ventrans Rīga was started on January 14 this year, the fate of 3.3 million euros is significant, which, at least in the opinion of the court of first instance, is an amount due to the State of Latvia.
18.10.2021. Uldis Dreiblats

HE CAN'T BE THE ONLY ONE HELD ACCOUNTABLE. Rudolfs Meroni's right-hand man Gints Laiviņš-Laivenieks (pictured) has been appointed as the liquidator of SIA Ventrans Rīga, who will have to be held accountable about where the 3.3 million euros went. This will have to be done when the court decides the fate of these millions in the last instance. However, prosecutors and the court will also have to take some responsibility for the situation ©Nora Krevneva/F64

Neatkarīgā will not analyze in this article where such a very strange number of "rights" came from and to whom these "rights" actually belong, and so on. Neatkarīgā will only mention here the arguments as to why these are no longer some incomprehensible "rights", but real money, which one of the state authorities must take care of at this stage of the criminal proceedings as well.

It should be recalled that the process facilitator in the Lembergs case, at the time when the liquidation of SIA Ventrans Rīga was initiated, was the Criminal Chamber of the Riga Regional Court headed by Judge I. Jansone.

Therefore, Neatkarīgā directly asked Judge I. Jansone several questions, setting out in writing the arguments why in the case of liquidation of SIA Ventrans Rīga it is no longer the “true beneficiary's rights” that are "floating around somewhere" (term used by lawyer Mārtiņš Kvēps), but it is directly money in the amount of 3.3 million euros, so it would have been necessary to decide how to keep this amount.

Raimonds Ločmelis, Assistant to the Chairperson of the Riga Regional Court in Public Relations, informed Neatkarīgā that the following answer had been received from Judge Irīna Jansone: "The content of the questions concerns the material of the criminal proceedings, which is a secret of the investigation, so the court has no legal basis to give an answer to a person who is not a party to the proceedings."

Basically - keep waiting on the issue of seized property…

Is the 3.3 million euros a trifling amount to the country?

Neatkarīgā also argued to the court that in the case of SIA Ventrans Rīga it is not difficult to calculate the amount of the above-mentioned liquidation quota, moreover, it is money and not “rights” "floating around somewhere."

For example, the last annual report (2016) submitted by SIA Ventrans Rīga to the State Revenue Service indicates that it owns 11.47% of JSC Latvijas naftas tranzīts shares and this investment is valued at more than 12 million euros in the annual report. There is no doubt that this is an adequate assessment, as the share capital of JSC Latvijas naftas tranzīts is 104.7 million euros and this share capital was at least initially made up of real money. This is the most significant asset of SIA Ventrans Rīga, moreover, SIA Ventrans Rīga is solely a holder of shares of other capital companies and does not perform other economic activities.

Accordingly, it can be calculated that the liquidation quota of SIA Ventrans Rīga in the amount of 27.853%, which is subject to arrest imposed by a prosecutor and a judgment of the Riga Regional Court of first instance on the need for confiscation, is more than 3.3 million euros.

Upon liquidation of SIA Ventrans Rīga, it should sell the shares of AS Latvijas naftas tranzīts.

In addition, circumstantial evidence (annual report of JSC Ventbunkers) shows that SIA Ventrans Rīga has already sold these shares, which means that the money - 12 million euros - must already be in its account.

If SIA Ventrans Rīga no longer has this money, then it has been squandered, including the seized property!

The court in another case: "Transfer the money to the court account!"

Neatkarīgā also reminded the Riga Regional Court of a precedent of how the panel of this criminal case acted in another, basically identical situation. In February 2013, JSC Ventspils tirdzniecības osta announced to the Riga Regional Court that it was going to sell its JSC Baltic Coal Terminal shares, including those that create “true beneficiary's rights” in JSC Baltic Coal Terminal that have been arrested in Lembergs criminal proceedings and must be confiscated in the opinion of the court of first instance.

At that time, the Criminal Chamber of the Riga Regional Court, chaired by Judge Boriss Geimans, ruled that JSC Ventspils tirdzniecības osta could sell these shares and there was no need to ask for a special permit from the court to perform such a transaction.

The only restriction imposed by the court was that if the funds obtained as a result of the sale of the mentioned shares were directed by JSC Ventspils tirdzniecības osta for profit distribution, then 20.161% (this is the amount of seized “true beneficiary's rights”) must be transferred to the Riga Regional Court deposit account. The court also strictly stated the exact account number to which the money is to be credited: 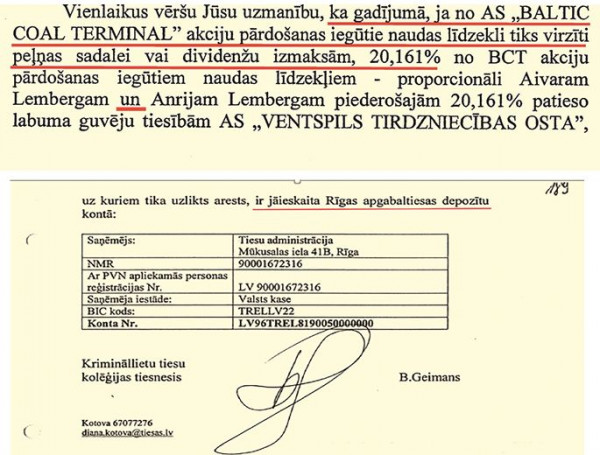 Respectively, in the case of the Riga Regional Court, with the sale of the shares of JSC Baltic Coal Terminal, it seemed to take care that the money in the amount of the seized “rights” would not disappear until the last instance. On the other hand, in the case of the liquidation of SIA Ventrans Rīga, no worries were shown on the part of the court for money in the amount of 3.3 million, which the state has to take care of.

Probably because the management of Ventrans Rīga did not inform the court at all about the commencement of the liquidation of this company.

Neatkarīgā has already reported that Rudolfs Meroni's right-hand man Gints Laiviņš-Laivenieks has been appointed liquidator of SIA Ventrans Rīga and the Provision State Agency is powerless to take over the seized property, including the “property” that commands the ownership of SIA Ventrans Rīga.