Covid-19 and vaccination rates in Latvia are growing in parallel

The incidence of Covid-19 in Latvia this autumn is growing in exact parallel with the increase in the number of vaccinated.
19.10.2021. Arnis Kluinis 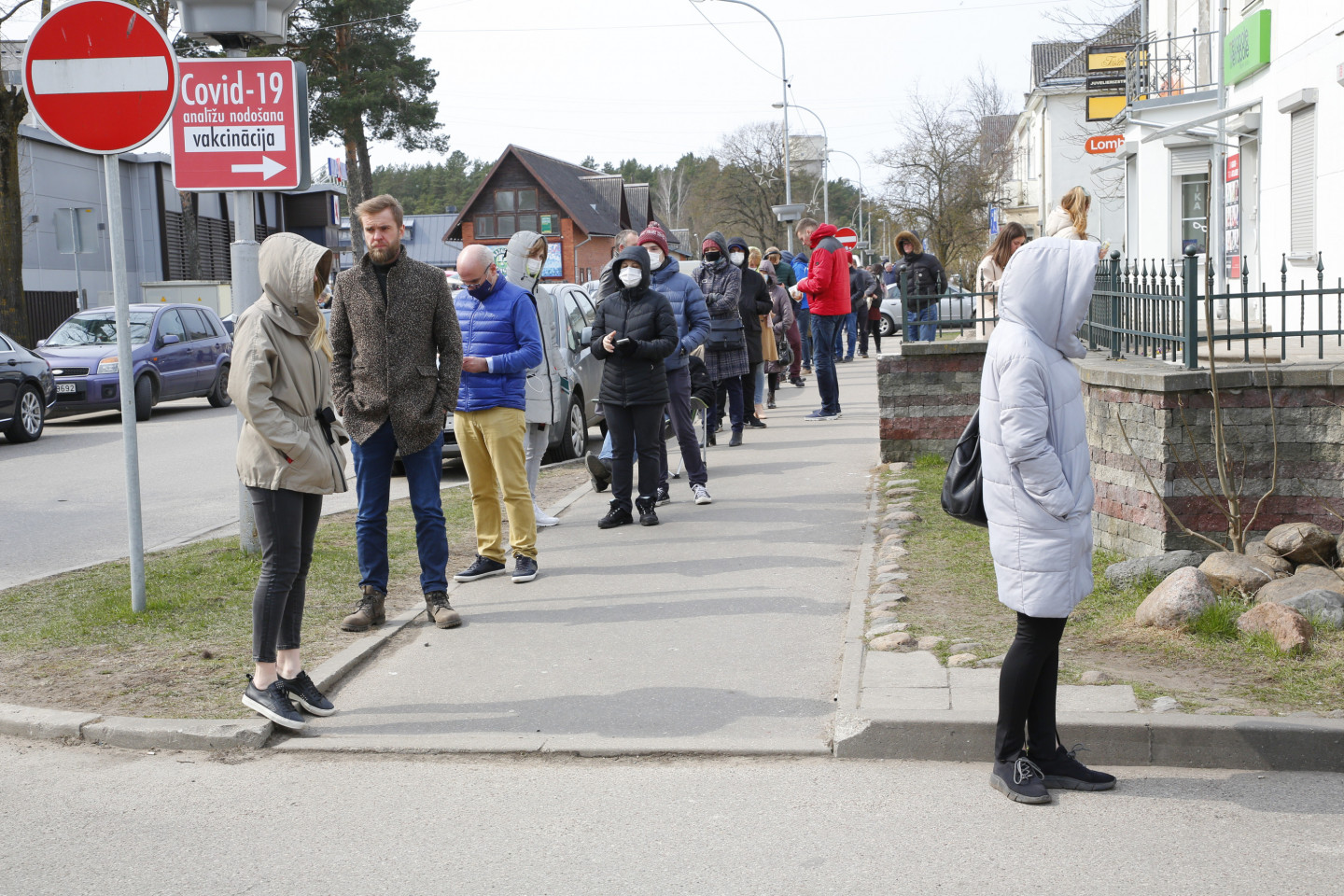 START IN THE QUEUE TO THE VACCINE, continue in the queue to the hospital, as shown by the autumn 2021 statistics in Latvia ©Kaspars KRAFTS, F64 Photo Agency

There is not the slightest idea what such a coincidence means. It cannot be ruled out that people get vaccinated when Covid-19 affects people close to them or at least people who are so well known that their suffering from the disease is seen with their own eyes. However, such an answer only reinforces the question of why the jump in the number of vaccinees does not in any way slow down the same jump in morbidity.

The Central Statistical Bureau (CSB) referencing the National Health Service informs that on September 1, 698 thousand or 37% of the permanent population in Latvia had been vaccinated against Covid-19. This level of vaccination could also be equated to half of those who can be vaccinated, as it is still unclear whether children should get vaccinated, but children are also permanent residents of the country. Even if the question remains whether the number of vaccinees at that time should have been considered as half or only a third of those who can be vaccinated, their proportion was still large enough to justify statistically significant comparisons of morbidity in seasonally identical situations.

As you know, Covid-19 officially appeared in Latvia in the first months of 2020. This was followed by an outbreak in the cool months of late winter and spring, a lull in the summer of 2020 and a new outbreak in the winter of 2020/2021 with a subsequent lull in the summer and a third wave of the disease at present. Such waves seem self-evident in diseases, i.e., viruses that attack the respiratory organs. Equally understandable is the intention to defeat the disease with vaccines, which have a centuries-long and famous history of use against similar diseases. Attempts to develop a vaccine against Covid-19 around the world began at the same time as the official recognition and naming of the disease. It is understandable that it was not possible to get the vaccine ready for either the first or the second wave of the disease, but in the downward phase of the second wave, the vaccine (competing vaccines) also reached Latvia, and vaccination began. This makes it possible to compare the rate of increase of the first two waves of disease, the severity of the disease and many other parameters in the time before the vaccine appeared and now also these two waves with the third wave, which is growing in a semi-vaccinated society.

Data on the last two waves of Covid-19 is published by the Center for Disease Prevention and Control. The unit of incidence used is the 14-day cumulative incidence per 100 thousand inhabitants. There is no need to waste time on the definition of this unit of measure, as it is sufficient to follow how the value of a unit of measure has changed over time.

If the CSB data series ends on September 1 of this year, then let's look at September 1 in two adjacent years without significant differences in the meteorological conditions that people have come to associate with respiratory diseases. There is no noticeable difference in this respect. The effect that vaccination should have had on the spread of the disease remains. If its coverage is between 30 and 50 percent of the required number of people, then it seems logical that the intensity of the disease should decrease. Let's not demand a direct halving, because we need to keep in mind both the uncertainty about the origin of the virus and the fact that vaccines were designed, tested and approved very quickly. However, vaccines should reduce the spread of the disease somewhat, if they are vaccines at all, and if the disease that is now spreading is the same disease that people are being vaccinated against.

The Center for Disease Control and Prevention disseminates data that completely changes perceptions of vaccination. The incidence rate used by the Center has not decreased but rather increased from 4.2 units on September 1, 2020, to 137.4 units on September 1 of this year.

The next step is to expand this same discrepancy to a cosmic scale. On October 16, the incidence rate was already 1,195.4 units. All this happened in the month when people were queuing up not only at hospitals, but also at extended vaccination points at fairs, etc. The purely arithmetic relationship between vaccination and morbidity is as if a 99% safe way of spreading the disease would be to either stand in these queues or receive the vaccine.

The vaccines were issued with the warning that they did not provide a 100% guarantee against catching the disease, but would certainly make its course (the course of Covid-19, without taking into account the side effects of the vaccine) lighter. There are no grounds for this promise either. In Latvia, there would be no need to declare a state of emergency in medical institutions if the vaccine were to convert Covid-19 into basically a runny nose, for the treatment of which it would be sufficient to issue certificates of incapacity for work to the sick.

Yes, of course, not all have been vaccinated, but this does not explain why the prevalence and severity of the disease are not decreasing, even in a somewhat proportional way to the number of vaccinated.

Figures certified by the national authorities also dispel the notion that vaccination should reduce morbidity in such a way that vaccinated people spread the virus less because in their bodies viruses cannot reproduce as well as in non-vaccinated bodies, and non-reproduced viruses cannot spread. The effects of vaccination on the spread of viruses now seem to be the opposite.

The Latvian state and the people appointed here as officials in the field of infectology have not publicly said a word about the fact of a parallel increase in vaccination and morbidity.

The increase in mortality reported by the CSB lags behind the clamor around Covid-19. If there was no clamor, these increases would seem to be within the normal range of mortality fluctuations for at least two years in a row. More importantly, the increase in mortality has remained small despite the clamor that has begun to eradicate conventional medical care. In this context, Covid-19 proves to be less of a threat to humans than other viruses or to other mechanisms of disease and death that are displaced by Covid-19. This is also one of the symptoms of our ignorance of what we call Covid-19.