The lockdown is presented as a sex position

The Covid effect on birth in Latvia confirms the anecdote/recommendation for people living in too cramped a room to buy a goat and enjoy all the space after they have gotten rid of the goat.
20.10.2021. Arnis Kluinis 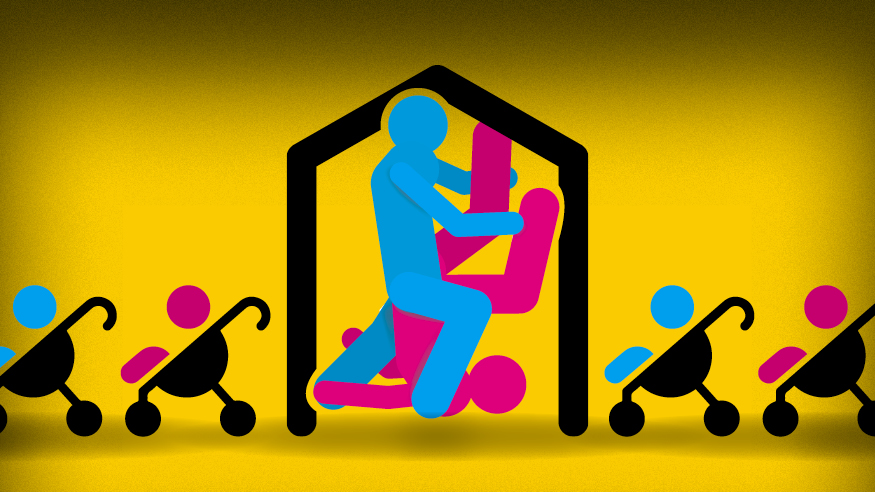 At present, children continue to be born, whose parents had decided to have them after getting rid of, if not precisely a goat, then definitely the restrictions of the first Covid season. Covid-19 is also similar to a TV show in the sense that its seasons are not clearly tied to a calendar year. Several Covid seasons are possible in one year.

In the past, the four-year cycle with a large number of people falling for exaggerated promises, i.e. promises before the next Saeima elections, has sometimes shown a great impact on birth rate fluctuations. In the second half of 2018, these promises were able to reverse the declining birth rate that had been happening since mid-2016. For physiological reasons, this was delayed by nine months. In the 4th quarter of 2019, the number of newborns under Krišjānis Kariņš's government turned out to be 195 higher than in the 4th quarter of 2018, when people still believed that at least those they voted for in the 13th Saeima elections would get the power and then keep their promises. Such a belief materialized a year later with their children, whose creation process was started due to this belief, but not because of the work of K. Kariņš's government. This government, even before the Covid masks, instilled such horror in people that when these conceived children began to be born, their numbers fell by half a thousand every quarter compared to the same quarter last year. Covid masks slowed this decline to -300 children per quarter.

“In the first six months of 2021, 8,351 children were registered, which is 606 newborns less than in the corresponding period of 2020,” said the Central Statistical Bureau.

Since then, two months have passed and the CSB has also counted newborns registered in July and August. The results for these months differ from the overall half-year trend, as 1,603 newborns in July gave +58 against July 2020 and 1,552 newborns in August - even if only +2 against August 2020. These months confirmed Neatkarīgā's explanation of birth trends in the first half of the year, when -10 in June versus June 2020 looked much better than -108 in January against January 2020. The minuses had not yet turned into pluses at that time, but one could hope for it: “The series of data published by the Central Statistical Bureau currently ends in June, when the children born were conceived in October last year, when the respite from Covid between the two states of emergency continued. Then there was the removal of some restrictions, Covid support payments for the past forced downtime and just warm weather. In hindsight, this explains the curvature of the birth curve in the direction of increase,” Neatkarīgā noted on September 8, when the +58 in July had not yet been announced.

Unfortunately, demography is not like geometry in school that considers two points to be enough to draw a straight line through them that will go on indefinitely. The birth rates of +58 in July and +2 in August do not guarantee that the birth rate will remain positive compared to the second half of 2020, nor will the birth rate decrease by 50-60 newborns per month, nor any other trend that can be obtained by doing calculations with two numbers. However, after the data for September, October, November and December will be published, there will also be a very clever explanation as to why such results are self-evident following what happened in Latvia in the Covid TV show's winter 2020/2021 season.

The data for September and October this year will show how much truth there has been in the jokes of the past year that forcing people to stay at home is leading to an increase in the birth rate because the process that creates children is the best way to spend free time.

Equally convincing are the opposite predictions that the introduction and implementation of a state of emergency will completely destroy the birth rate, as it shows people how little they can influence their lives and that it is not desirable to take responsibility for children as well. Evil tongues would add that everyday difficulties affect people much more than noble responsibility, during a time when parents and children have to stay in premises that are not suitable for all their occupants to stay there at the same time and without a break, and even work or study next to each other, rather than in an educational institution, company, etc.

While the CSB is still counting newborns all over the country, the Riga Maternity Hospital has published news that October 5 with 32 newborns is a daily record for the last two years. LTV's October 8 story about the event confirmed that all these children were conceived in January when there was a curfew and people had to be at their homes at night. The October data are still in process, but the Maternity Hospital was already able to share the results of September when 532 children echoed the 537 children in July (in the calendar there is August between these months, which was not reported by LTV). The Ministry of Health told Neatkarīgā that no organizational changes have taken place so far, no redirecting of pregnant women in other places to the Riga Maternity Hospital to free up resources for solving Covid-19 problems. This, at least in the first approximation, confirms the jokes that darkness is all you need to create children. The opposite statement is supported by the extremely low birth rate in early 2021 as a consequence of the very first Covid season with a state of emergency from March to June 9, 2020.