Children are a pass for hybrid migrants to get in Latvia

According to the opinion of the Ombudsman's Office, the separation of minors from adults who are illegally trying to take them from Belarus to Latvia is not allowed. The human trafficking scheme implemented by criminal groups and the Belarussian authorities is working perfectly. For humanitarian reasons, Europe only shrugged, and the suffering of migrant children does not count.
04.11.2021. Imants Vīksne 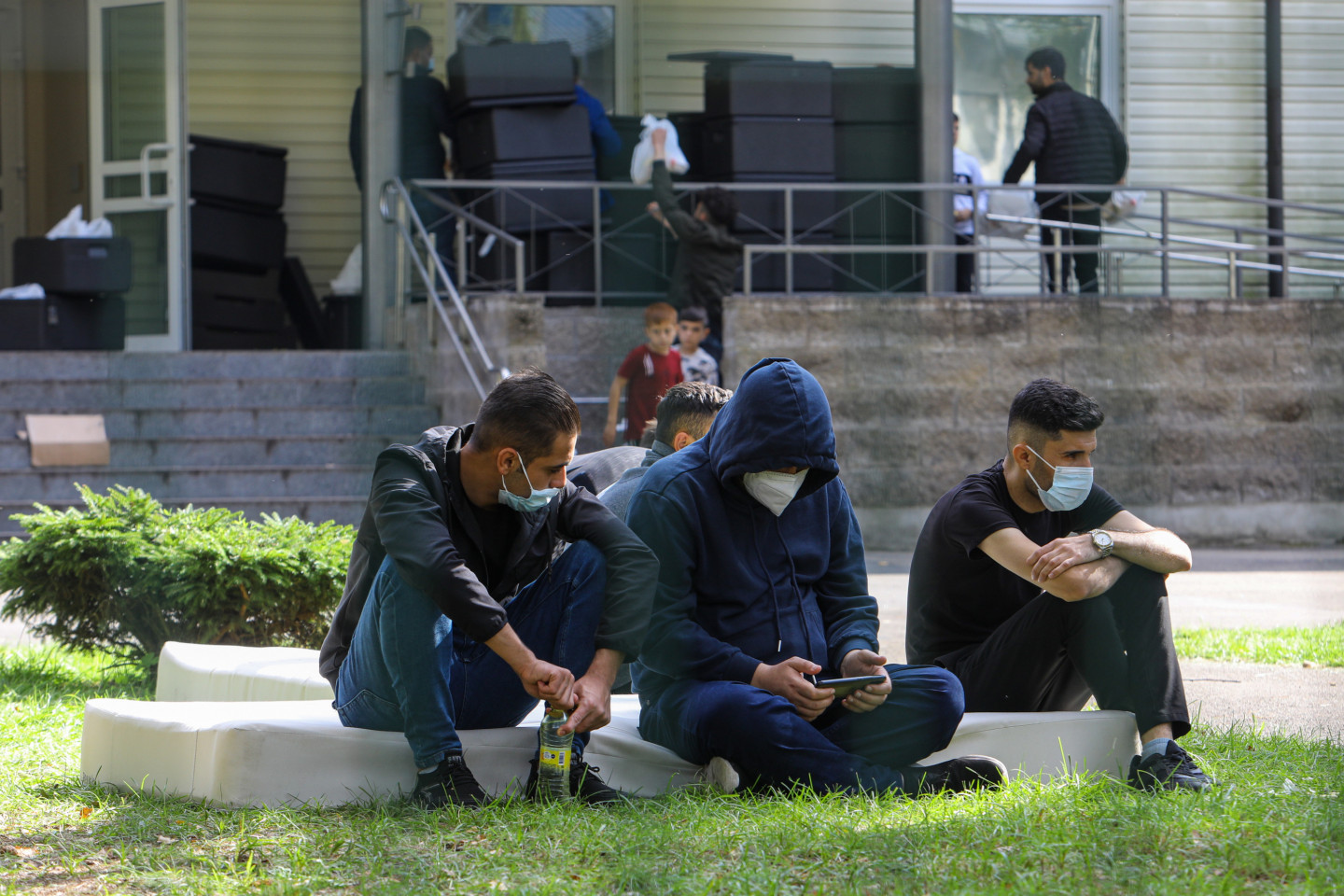 This is already recognized at the highest level: the current migrant crisis on the Baltic-Polish border is artificially staged and keeps being exacerbated by flocks of migrants being sent from the east through Minsk to the European Union's external border. Belarus grants tourist visas to these persons, although such tourist routes have never existed before. Migrant groups are organized through criminal trafficking groups. And now not only from Iraq. At the government meeting at which the special law on fence construction was approved, the Minister of the Interior Marija Golubeva mentioned that according to the observations of Polish colleagues, the number of flights from Syria, Lebanon and Oman is increasing. In Minsk, "tourists" arrive through the United Arab Emirates and Turkey. Such a trip is very expensive, but money is obviously not a problem, and about 7,000 migrants are currently being prepared in Belarus to force the European border. They also include minors. If a group of migrants pretending to be relatives is accompanied by a child, Europe will open its doors to them for humanitarian reasons.

Neatkarīgā has already reported that "Behind the migrant hybrid attack, children are being trafficked". Minors are used to legally force the authorities to allow migrant groups into European territory on humanitarian grounds and on the basis of the UN Refugee Convention. Basically, it is the exploitation of minors and their involvement in a human trafficking scheme. However, children are not separated from those who use them. They serve as a universal pass to enter the European Union also through Latvia.

Until the introduction of the state of emergency at the border, the State Border Guard had not created profiles of migrants. It is known that more than 400 third-country nationals have crossed the border illegally this year, but it is not known exactly how many minors are among them.

However, it is known how many children are among migrants who were deliberately admitted to Latvia after August 10: "In total, 55 people, including 23 children, were not prevented from crossing the state border illegally for humanitarian reasons."

This means that living shields - children - are taken along migrant groups in large numbers, deliberately exposing them to hunger, cold, disease and risk of death.

The Border Guard, criticizing the Neatkarīgā's previous publication, rejects the assumption that a minor is an adult migrant's pass: "It is absurd to claim that if a person crossing the state border illegally is accompanied by a child or children, humanitarian considerations automatically arise and the persons are not prevented from crossing the border. Absolutely NO! The child is not a humanitarian consideration in itself, each case is assessed very individually, and most persons are admitted to the country because they need medical assistance, which, if not received in time, can have fatal consequences!”

Neatkarīgā asked the Border Guard press service how many people were admitted to the country based on their health status. There is no such information:

“The State Border Guard does not have specific data on how many of the above-mentioned 55 people needed medical assistance directly, but the SBG was guided and is guided by the principle of not separating families, i.e., if there is a person or persons in need of this emergency medical assistance then, for humanitarian reasons, the whole family was not prevented from crossing the border, not just the individual family members who needed that emergency medical care."

And here it should be reminded that winter is coming. At night, the temperature drops close to zero, and many people may need medical attention. Hypothermia can occur to anyone who is improperly dressed or drenched in the rain, regardless of age. You have to freeze, be a little patient, and then you can get inside. The calculation of the organizers of this hybrid attack on migrants is just that cynical.

Children in the hands of abusers

As for the use of children in this criminal scheme, the Latvian authorities are acting helpless. Neatkarīgā has already reported that the Civil Law protects only Latvian children. Migrants are subject to the Immigration Law, which allows for the preservation of "family unity". The same families that involve children in a human trafficking scheme. As the State Inspectorate for Protection of Children's Rights explains, “the fact that a person together with a minor child illegally crosses the border cannot be treated as a violation of the rights of the child, which should be followed by separating the child from the family”. Thus, adult relatives are allowed to exploit minors. And the opinion of the Ombudsman's Office is similar:

"There is no legal basis for the separation of children from their parents on the grounds that their parents wish to enter the European Union with their children, as the parents may be acting in the best interests of the children in order to save them from danger in their country of origin. The mere fact that parents and their children have come to the attention of the State Border Guard does not indicate that the parents are abusive and put the children at risk, each case must be assessed individually. As a party to the UN Convention on the Rights of the Child, Latvia must make efforts to protect such a child and provide assistance to the family, and not to separate children from their parents by assuming that the parents are abusing their rights.”

In the opinion of the Ombudsman, also with regard to migrants used in the hybrid operation in Belarus, it should not be generally accepted that they all enter the European Union and Latvia without a legal basis. At present, individuals and families with children fleeing the Taliban regime in Afghanistan are also seeking asylum. Similarly, persons whose country is not in active war are eligible for international protection if there is evidence of an individual threat of persecution, for example on the grounds of race, religion, nationality, belonging to a particular social group or political opinion. That's why:

“In cases when foreigners cross the Latvian border, the State Border Guard has a duty and it finds out the identity of the immigrants, the country of origin and the reasons for entry. Only by examining the identity documents and hearing the reasons for entry can it be ascertained whether the person is seeking entry without a legal basis or is seeking international protection."

One can only imagine how this interrogation took place in practice before the declaration of a state of emergency when the government allowed the use of force and psychological intimidation to deter migrants. A border guard or soldier came to a group of migrants and asked in Russian, English or through an Arabic interpreter: "Hello, are you traveling without a legal basis and we will drive you back to the territory of Belarus, or do you want international protection where we will feed you, warm you, accommodate you and give you an allowance?"

Not a step on our side!

It is no wonder that hundreds of migrants managed to enter Latvia in this way. At the moment, this is no longer the case, dozens of migrants are being pushed back every day, but, as the Ombudsman's Office emphasizes, this must not endanger them:

"A situation in which foreigners are "stuck" at the border between two countries and neither of them allows them to enter or return to its territory must not endanger people, especially children, to the extent that it constitutes inhumane treatment or torture. If families with minor children are “stuck” on the Latvian border with Belarus, Latvia does not allow these persons to enter its territory and Belarus also does not allow families with children to return there, a situation may arise where families with children are without food for a long time, under the open sky in the autumn-winter season. By restricting the movement of such families at the border by two countries, parents in such a situation may be limited in their ability to take proper care of their children, even if they wish to care for their children and meet their needs. In order not to endanger a family with children, the State Border Guard, finding that it is not possible to return the family to Belarus, may allow such families to enter on humanitarian grounds in order to allow them to leave for their country of origin at a later date."

It should be emphasized here that the wording “foreigners are stuck at the border between two countries” in relation to Latvia and Belarus is incorrect. There is no neutral zone between the two countries. Migrants located on the other side of barbed wire coils and/or border posts are located in the territory of Belarus, and until they are admitted to Latvia, their well-being is solely a matter for themselves and the Belarussian regime. They become Latvia's problem with the first step on our side. That must not be allowed to happen.