In October 2021, every third Latvian adult read Neatkarīgā at least once a month!

Today marks exactly one and a half years since Neatkarīgā started coming out in the digital format. From February 12 to April 14, 2020, the Latvian research company Kantar, with more than 25 years of experience, conducted a survey of the spring phase of the National Press Audience Survey.
05.11.2021. JPJuris Paiders 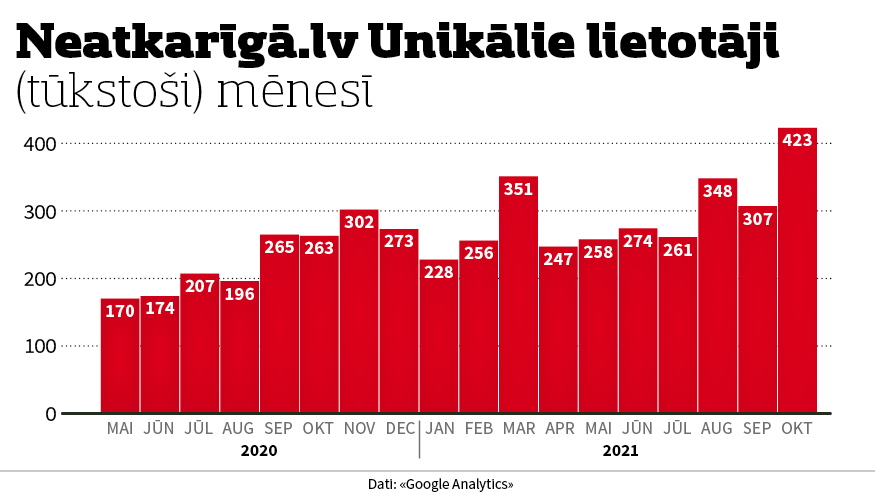 3,000 permanent residents of Latvia aged 16 to 74 were surveyed throughout Latvia. According to Kantar, in the spring of 2020, the weekly audience for Neatkarīgā (the number of readers who had read one of the last six issues) was 51 thousand.

In a year and a half, Neatkarīgā tripled its readership. Similar results are shown by companies that perform independent internet traffic measurements. According to Google Analytics, in May 2020, the number of unique users in one month was 170 thousand, while in October of this year it reached 423 thousand. As at least a third of readers in Latvia read mainly in Russian, it follows that in October 2021, every third Latvian adult read Neatkarīgā at least once a month!

One and a half years ago, many of Neatkarīgā's journalists and readers saw the abandonment of the paper format as a deeply tragic change. Some of our colleagues refused to continue working on the digital edition. However, the end of something is always the beginning of something else. When one door closes, another can usually be opened. In a year and a half, Neatkarīgā has managed to reach the same audience in digital format as Neatkarīgā had in the early 1990s, when the circulation of the paper version exceeded 100,000 copies.

Thank you to all the staff and partners who supported us during the transition, but most of all to the loyal readers of Neatkarīgā. You are the reason why we create Neatkarīgā.