The absolutely neutral, even meaningless slogan "Let's go Brandon" has become the main slogan against President Joe Biden by his opponents. It is shouted out of the stands during football matches, printed on T-shirts and it has become viral on social networks. Why and what does it mean?
08.11.2021. BLBens Latkovskis 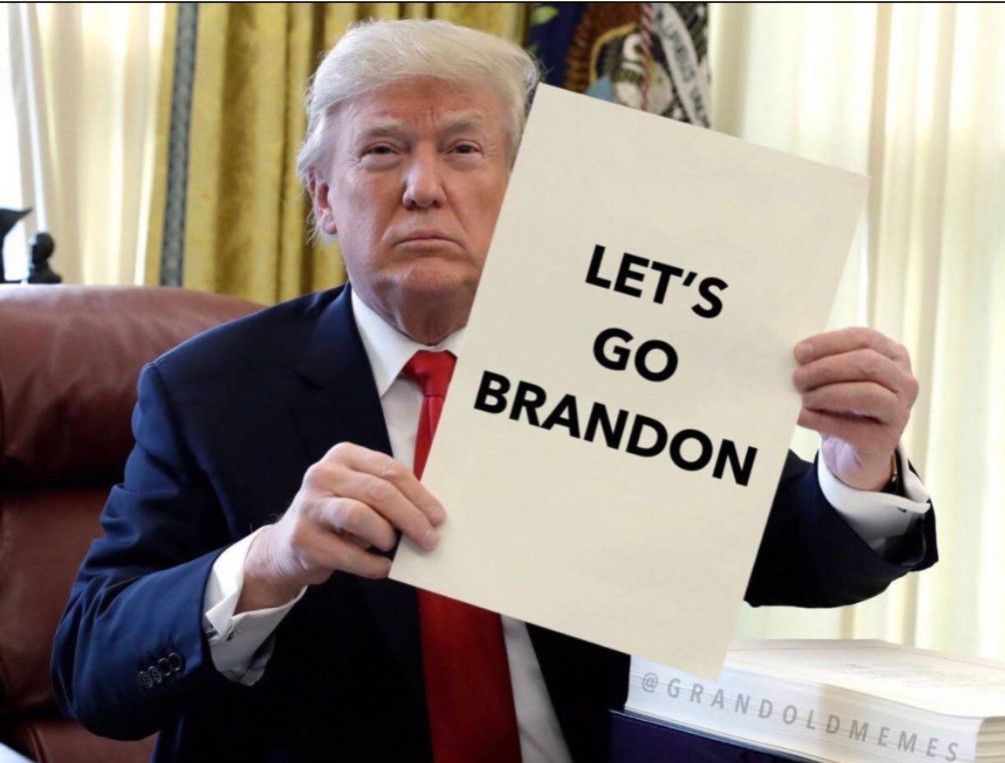 It all started in October after the NASCAR race on the Talladega track in Alabama. The winner of this race, Brandon Brown, was interviewed live by NBC Sports reporter Kelli Stavast, and the crowd was chanting something incomprehensible at first. Stavast thought the crowd was shouting, "Let's go Brandon," and she complimented Brandon Brown, when in fact the crowd was chanting (as it soon became clear), "Fuck Joe Biden." The video of this interview quickly became viral, and it began to be used as a subtle euphemism to tell the president of their dislike.

It's been a year since one of the most unusual presidential elections in U.S. history, and it's time to look at what has changed? Which way? A year ago, the huge number of postal voters gave the opportunity to question, challenge and even reject the results of these elections. Former President Donald Trump and many of his supporters still believe that their election victory has been brutally stolen. There is no point in even arguing on this issue. This is not debatable. You either believe it or don't. There are no other options.

The four years of Trump have undeniably left a huge imprint on the US political class as a whole and on politics as such. His contribution to political culture is that you can also act like that - brutally, shamelessly and most importantly - independently. What do fans of Trump value most in their idol? The fact that he was able to stand strong against the huge power machine - the whole political class. By that, they mean not only the deep state but also the prevailing public opinion that is being jammed in their brains across the front, from the New York Times on the East Coast to Hollywood on the West Coast.

Trump did not try to maneuver or somehow appease this "dragon" like other "serious" politicians. Before Trump, it seemed that this huge steamroller of the "progressive society" would run over anyone with a similarly steadfast position. But Trump endured to the end. There was no point in which he succumbed in his rhetoric to this huge pressure.

This side story about Trump is necessary for a better understanding of the Biden phenomenon. He was nominated and elected as the man who could throw the brazen upstart Trump from the White House. Hillary Clinton's sad fate in the 2016 election pushed the Democratic Party's leadership out of the euphoric beliefs that prevailed during Barack Obama's presidency when the demographic situation in the United States seemed to have changed so much that Democrats would be in the White House forever. Suddenly, it turned out that it was not like that at all, and a sure victory was not guaranteed. The fight for the center of the political spectrum is crucial. Left voters will vote for anyone who is not Trump, but the central voters can be undecided even when sitting in the polling booth. So, a moderate must be nominated who will not deter with his socialist ideas those "real Americans" who, for various reasons, do not like Trump or find him unacceptable, and the same goes for the left ideas.

Biden got into the White House with the votes of these centrists, and a majority of Democrats in both houses of Congress allowed the party leadership to act more freely than if it had not been a majority. In other words, Biden's personal political weight became less important. He did not become the main force of the Democrats. He became one of them. Along with Congress and the media.

The media was undoubtedly one of the central tools for overthrowing Trump. For all four years of his reign, the leftist media poured mud on him constantly - 24/7. Even after Biden's victory and arrival in the White House, it continued to be lenient to the new president and viciously criticize Trump and the Republican Party as a whole. Even if only because it did not distance itself from its black sheep (in the leftist media view) - Trump. The turning point in the media's attitude towards Biden came on August 15 this year, when all the information channels were dominated by reports about the shameful escape from Afghanistan and the tragic videos from Kabul airport. It was the latter that opened the long-locked gates and returned things to normal, that is, to a critical appraisal of Biden's actions.

It was in August, as shown in the chart published in the US authoritative public opinion polling portal Fivethirtyeight, that Biden's popularity began to decline. One can, of course, search for and find some of his political mistakes, but I think the main reason for Biden's decline in popularity is the removal of this taboo on heavy criticism. Biden was always criticized even by hardcore anti-Trumpists, but until August this criticism was like a blow through the pillow - with half force and trying not to knock out the opponent.

If in the spring him tripping on the plane stairs was ignored by the "decent" press and any reference to Biden's physical condition was perceived as an inappropriate expression of ageism, now his frequent falling asleep (at the meeting with Israeli Prime Minister Naftali Bennett and now at the Glasgow Climate Conference) is easily joked about without a second thought.

Of the politically serious issues, Biden's rating was most affected by rising inflation as a result of the huge amount of money issued, which started during Trump's time. Let me remind you that in 2020, US government debt increased by 4.16 trillion US dollars, the lion's share of which was bought by the Federal Reserve System (the Fed) in an instant. The Fed's balance sheet was increased by 3.18 trillion US dollars, far more than Russia's accumulated foreign exchange reserves in all 20 years of Putin's rule, by sparingly saving every dollar rolling by the Kremlin kleptocratic accounts from hydrocarbons sold in the National Reserve's fund for "rainy days."

While back in the spring, Biden's astronomical, unprecedented plans for infrastructure and employment (2.3 trillion US dollars) and social assistance - strengthening families and education (1.8 trillion US dollars) - had relatively high public support, now the US position that “there is now more money than there has ever been” (there it is even more pronounced than in our country) is already subject to increasing criticism, because the "real" Americans (not just Trumpists or rednecks with MAGA hats on their heads) do not really like them throwing money around.

However, Biden's decline in popularity should not be seen as catastrophic for him. The unexpected defeat of Democrats in the recent gubernatorial elections in Virginia and the narrow victory in the seemingly safe New Jersey will certainly force them to reconsider the party's course. It is a regular advantage of the democratic process that after each election, including regional elections, the course of the parties is changed according to their results. However, if the strong tilt to the left is not eliminated, the consequences may be unpredictable. Maybe we'll even see Trump return. About what the Biden administration plans in the foreign policy that is of more interest to us, I will write in another article next time.