The Kremlin mourns the convicted agent of influence Alekseev

The conviction of Yuri Alekseev, an instigator of ethnic hatred, a fan of child pornography and a holder of illegal ammunition, in Russia is being translated as confirmation of the persecution of political opponents in Latvia. The main cries are from the Latvian Russian Union (Latvijas Krievu savienība), of which the defendant is a member, and Alexander Dyukov, a Kremlin court historian, whose delegated function is to spread lies about the Baltic states.
09.11.2021. Imants Vīksne 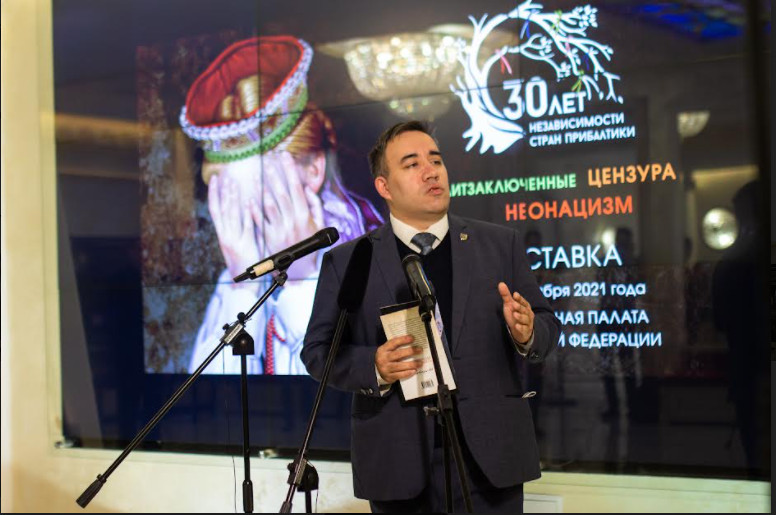 Dyukov takes care of the fulfillment of the employer's orders so conscientiously that he has been on the Latvian list of undesirable persons since 2012. At that time, he was going to bring an "exhibition" with fake content to Latvia. Therefore, the authorities took care that this Russian citizen would no longer mess with Latvia in person. Now he does it remotely, organizing "exhibitions" about Latvia, Lithuania and Estonia in Russia and talking about them on the Russian-speaking web.

Neatkarīgā has already reported that "There's a new informational diversion against the Baltic States in Russia". A non-governmental organization run by the Russian government under the leadership of Dyukov organized an "exhibition" in Moscow a few weeks ago on the resurgence of Nazism in the Baltic States, persecution of opponents and other similar nonsense, which theoretically set the Russian public against Latvia, Lithuania and Estonia.

This is also the aim of Dyukov's activities - to incite hatred so that, if necessary, the Russian society would justify causing harm to the Baltic States.

The "exhibition" is followed by a propaganda and lie campaign, which gets supplemented by new elements and republished in the Kremlin's propaganda publications both in the Russian information space and in Belarus. In the specific case, the material has been supplied by the Latvian Russian Union, which is mourning its member Yuri Alekseev, who was convicted at the first instance.

Everone judges by their own standards

Here is what the Historical Memory foundation says in the publication “On the reaction of the Ministry of Foreign Affairs of Latvia and the State Security Service to the exhibition of the Historical Memory foundation”. Actually, there has been no official reaction. Neatkarīgā simply asked them to comment on this event that slanders the Baltic States. The Foreign Ministry said that in its opinion, "it is not useful to get involved in such a controversy, because it would give resonance and popularity to the lies of this propaganda organization". Meanwhile, the State Security Service explained that "the Historical Memory foundation managed by Alexander Dyukov has already come to the attention of the SSS and its activities have long been aimed at discrediting the Baltic States in the international arena." So Dyukov analyzes the publication of Neatkarīgā and cites Alekseev's conviction as confirmation of the truth and significance of his "exhibition". In short, Nazi zombies march through the streets of Riga, and the pure communists are imprisoned:

"The Ministry of Foreign Affairs of Latvia deliberately "does not notice" the pompous glorification of former members of the SS, nor the flare-up of neo-Nazism in the patriotic upbringing of youth, nor the suppression of freedom of speech and obstacles in the work of journalists, lawyers, public figures, who wish to have friendly neighborly relations with Russia. Although it was during the days of the exhibition that the shameful trial took place in Riga in the case of the well-known journalist Yuri Alekseev, which was fabricated by the State Security Service, and he was sentenced to 14 months of imprisonment." Everyone is obviously judging by their own standards.

In his last word, Alekseev reported that the munition has been planted, so was the pornography and he had not called anyone a fascist on the Internet. Accordingly, the State Security Service and the court of first instance disagree. But this does not prevent Alekseev's political like-minded people from preaching that a very famous journalist is being punished due to the content of his very famous Internet portal ИМХО-клуб.

The Latvian Russian Union promises to use the party's resources and representation in the European Parliament to draw the attention of the world community to the persecution of journalists in Latvia. Who are these journalists? Apart from Alekseev, whose last word can be read on his own website, other well-known figures include such hostile figures to the Latvian state as Vladimir Linderman, Alexander Gilman, Alexander Gaponenko, Alexander Filey and the same Kremlin court historian Alexander Dyukov. These are the "journalists" who are being persecuted by the Nazi zombies in the evil Baltic states.