Migrants are dangerous and possibly armed

The Polish border guards, army and special services are working in a coordinated and convincing manner. Most attempts by migrants to break into the European Union are effectively blocked. This means that the pressure will increase on the weaker borders of Lithuania and Latvia. According to intelligence services, migrants are already being transported by trucks closer to the Lithuanian border. They are dangerous and possibly armed.
11.11.2021. Imants Vīksne 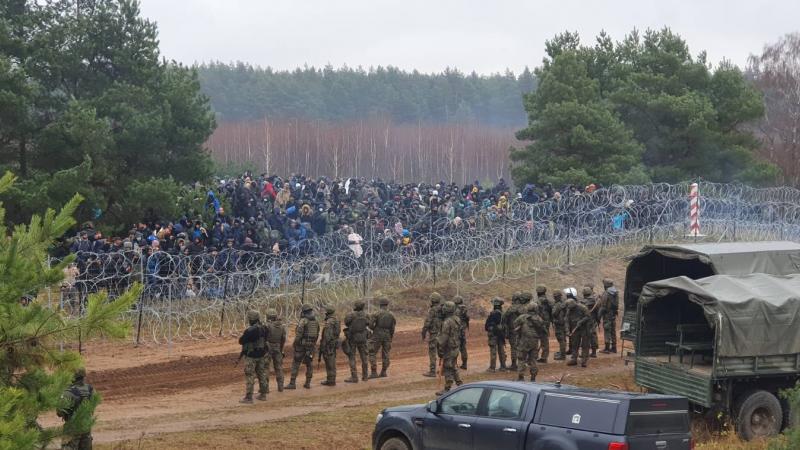 The fact that Lithuanians need to prepare for the increase in migrant pressure was announced yesterday by their chief of the border guard - on the other side of the border on the Belarusian side, migrant groups are being transported in trucks. And the Latvian services are also preparing for the aggravation of the crisis.

Minister of Defense Artis Pabriks has signed an order on additional readiness of the National Armed Forces to send additional forces to the border if necessary. In recent days, the situation on the border of the European Union in the territory of Latvia has not changed significantly. An average of 20-30 migrants are repelled every day. However, the roar of trucks in the territory of Belarus is not a good sign, even if it can only be heard in Lithuania for the time being.

In an interview published on the website of the State Border Guard, the head of the institution Guntis Pujāts admits that it is currently difficult to predict how the hybrid threat organized by Belarus will develop, so all services involved in the guarding of the Latvian-Belarusian border must be at increased readiness: "Seeing the events on the Polish border, we see a risk that the situation could worsen on our border as well, so further actions are being coordinated with both the police and the armed forces to have sufficient resources and to be able to respond to such threats." Currently, only Latvia's geographical location is playing in its favor because it is more advantageous to start from Poland or at least Lithuania to get to Germany, which according to the fable Belarus told migrants is the promised land for them.

At the same time, the common passivity of the European Union, and of the European Commission in particular, which is now bordering on harmful, is hurting all the countries affected by the migrant attack. Negotiations on new sanctions against Belarus are ongoing, no money is being given to the European border, no significant additional forces, only 13 third countries have been informed that they are or may be used in the hybrid operation in Belarus - Cameroon, Democratic Republic of the Congo, Republic of the Congo, Egypt, Georgia, Guinea, Iraq, Jordan, Kazakhstan, Lebanon, Pakistan, Tajikistan and Turkey. Another 20 countries, including Russia, are being monitored, whatever that means.

The Commission cares about phone chargers

Neatkarīgā has already reported that "The European Commission cares only about the safety of migrants". However, the threat posed by migrants to the citizens of the European Union is not a concern for them.

Instead of mobilizing the border guards of all European Member States, the European Commission is busy with, for example, "the introduction of common technical specifications for mobile phone chargers and charging sockets from different manufacturers".

But since yesterday, the meaning of the word "threat" has changed in the context of the migration crisis, as it is far from being the case of "engineers and architects fleeing war-torn lands in dreams of a better future for their children" as the European Commission continues to proclaim, invoking humanism, European values ​​and human rights. Agency LETA tells that yesterday the news brought by the former Belarusian diplomat Pavel Latushko was discussed at the summit of Member States: "Belarus is preparing Iraqi and Afghan veterans for armed attacks on the EU border". And Neatkarīgā has already warned about such a scenario. The majority of migrants are Muslim men in the prime of their life. Children, pregnant women and the sick serve as their shield. The fact that they came from Iraq means that they were most likely involved in active hostilities on either side during the Iraq war. So they have military experience. They cut off the heads of either other clans or Christians. And what the Belarusian fugitive Latushko said confirms that the arrival of these fighters on European soil is no accident. The "engineers" are ready to kill.

They are trained fighters

Here is the key message from the former diplomat to EUobserver and to politicians in the European Union who are not thinking about war but about chargers and sockets. Lukashenko is using the migration crisis to bring into the EU territory people with military experience who have received additional training on the territory of Belarus to carry out terrorist attacks. The next thing Lukashenko will try to achieve is a local military conflict on the EU's borders, but until then he will market the world a picture of a humanitarian catastrophe for which Europeans are to blame. The Afghan and Iraqi veterans were handpicked and flown to Belarus between July and September. They were trained at a military base in Belarus, near the town of Opsa in the northwest of the country. The training was performed by Russian specialists. Iraqi citizens were trained first, but now they are training Afghans from Tajikistan, who also have combat experience. They are being prepared for clashes with the use of weapons on the Belarusian-EU border.

Golubeva: They are welcome!

Emphasizing the seriousness of the situation, it should be recalled that until recently, Latvian liberals and welcomers, including Interior Minister Marija Golubeva, were concerned that migrants were being called criminals, even though they were committing an illegal crime under the Criminal Code when crossing the border illegally. Yesterday, in an interview with CNN, the Minister said at 1:34 when asked whether migrants looking for a better life are welcome in the European Union, “I think they are welcome in the EU".

During her interview with #Latvia’s Interior Minister @MGolubeva_LV, @beckycnn asked how the #EU plans to protect migrants and refugees if they are pushed back in to #Belarus? “we have to make sure we keep the European asylum system functioning.” pic.twitter.com/g9BnrxaP9m

And then the "but" followed: borders cannot be open to mass migration organized by hostile countries and so on, but the Minister said THAT, and THAT is what the European institutions heard. The same EUobserver reports that the European Commission is growing dissatisfied with the method used by Poland, Lithuania and Latvia to repress migrants, affecting them psychologically and with proportionate violence. Because EU law requires the Member States to ensure the reception of migrants in order to assess individual asylum applications. If the European Commission, ruled by liberals and welcomers, succeeds then Latvia, along with the other countries affected by the hybrid war between Lukashenko and Putin, will be obliged to allow these uninvited hostile visitors into its territory.

Some liberal organizations who support the admission of migrants to the European Union - Providus and Gribu palīdzēt bēgļiem - back in the summer told the conservative nationalist community that migrants should not be called illegal migrants. You must call them non-compliant migrants. Now it turns out that these "non-compliant migrants" are at Europe's borders to shoot at Christians, and probably indiscriminately, whether it's a liberal or a nationalist, a Pole, a Lithuanian, a Latvian or a Russian in the crosshairs. Probably not everyone will shoot, but definitely those who have been given arms by the combined Lukashenko/Putin regime. Maybe they'll shoot already tonight.