Five European countries have the highest mortality from Covid-19, including Latvia

Latvia is ranked among the countries with the highest mortality rate from Covid-19 in the European Union. The number of deaths in our country, Bulgaria, Croatia, Estonia and Romania is significantly higher than in other countries and is over 100 deaths per million inhabitants.
15.11.2021. Inga Paparde 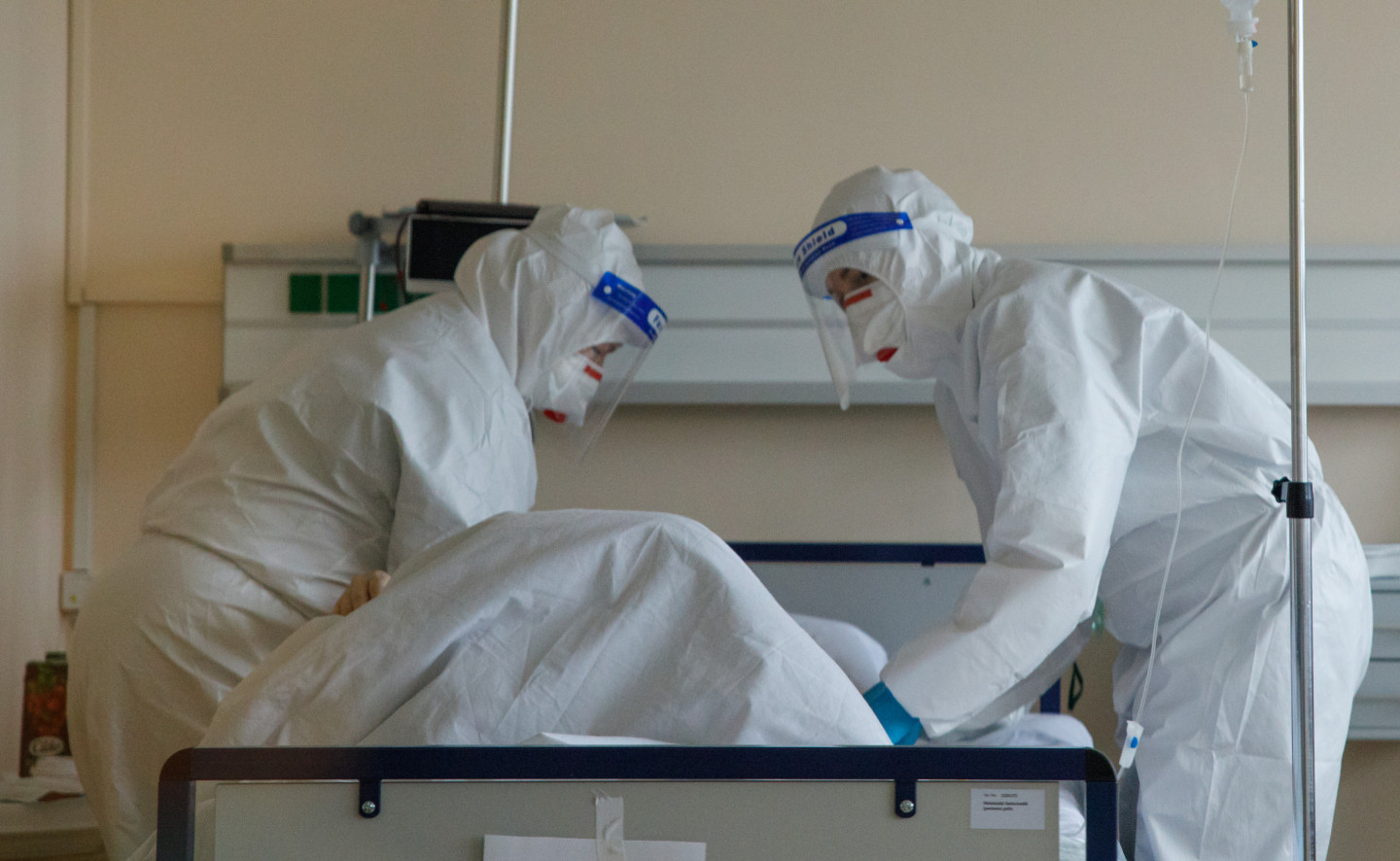 THE REASONS. Is the high mortality from Covid-19 in Latvia related to the overload of the health system or to the fact that Latvia has always been in the bottom part of Europe in terms of all health indicators (including industry funding) like Romania and Bulgaria, which also have the highest mortality right now ©Dmitrijs SUĻŽICS, F64 Photo Agency

Infectologist Uga Dumpis attributes this to the slow pace of restrictions to reduce the spread of the disease, but it cannot be overlooked that the countries with the highest incidence suffer from underfunded health care. 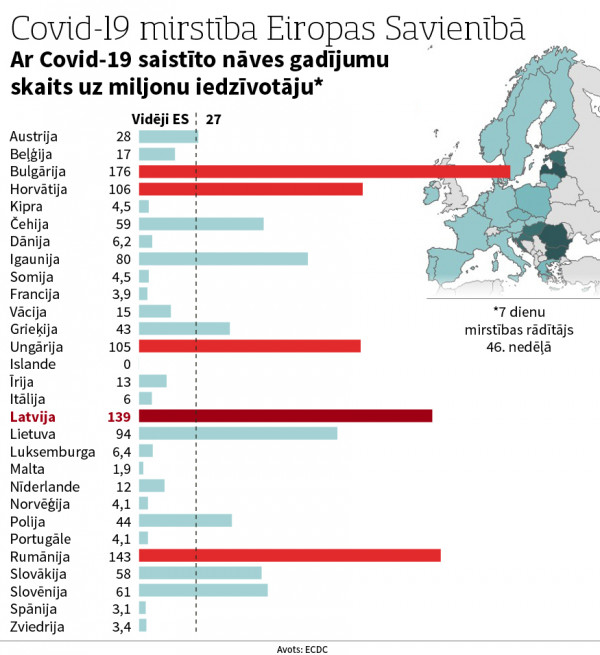 Mortality rates in the European Union and the European Economic Area over the last 14 days were 35.5 deaths per million population, according to the European Center for Disease Prevention and Control (ECDC). In contrast, the average seven-day mortality rate in the last week was 27 in the European Union. Mortality with Covid-19 has increased compared to previous weeks. The death toll was below 20 per million in 16 countries, with the lowest rates in Sweden, Denmark, Finland, France, Iceland, Italy, Norway and elsewhere, and the highest with over 100 deaths per million in five countries: Bulgaria, Croatia, Romania, Latvia and Estonia. Bulgaria is in the worst place (176 deaths per million inhabitants), followed by Romania (143) and Latvia (139). Mortality in Latvia has not increased in recent weeks but also has not decreased. Estonia concludes the top five, but the mortality rate in the neighboring country is significantly lower - 80 cases per million, although this rate has increased in the last two weeks. In contrast, in Bulgaria and Romania - only increased.

The data show that Latvia is no longer in the first place in the European Union in terms of mortality, however, this is due to the fact that the number of deaths in Bulgaria and Romania has increased significantly and these countries have overtaken Latvia in these negative statistics. ECDC data also show that Latvia ranks second in the European Union in terms of hospital workload. Between November 1-7, the number of patients hospitalized with Covid-19 in Latvia was 70 per 100,000 population. Only Bulgaria has a higher rate of inpatients. These two countries are followed by Estonia.

Uga Dumpis, an infectologist at Stradiņš Hospital and a professor at the University of Latvia, has pointed out that "the late slowdown of the giant wave of morbidity is the main cause of increased mortality in Latvia". "This has been the case before in Italy, Spain, Sweden, Belgium, the United Kingdom and many other countries. The healthcare system simply cannot cope with the flow of patients,” says the infectologist.

The morbidity is decreasing, but we're still at the forefront

About 80 percent of the sick - unvaccinated

The Center for Disease Prevention and Control has analyzed mortality rates for October. Of the 533 deaths in October who had been infected with Covid-19, 88 percent had not been vaccinated against Covid-19 or had not yet completed the vaccination course, and 67 people or 12 percent had one or more co-morbidities. Conclusion: The risk of death from Covid-19 infection in non-vaccinated and partially vaccinated individuals was 6.1-fold higher than in fully vaccinated individuals.

“From experience at Riga East Hospital, we find that patients who die from Covid-19 as a primary diagnosis mostly die from lung damage or complications caused by Covid-19 infection, but patients whose death is not caused by Covid-19 have a primary cause of co-morbidity, which is chronic or worsening due to Covid-19 - diabetes, stroke, chronic lung disease, overweight patients dominate,” says Oļegs Šuba, head of the Toxicology Sepsis Clinic at Riga East Hospital, an anesthesiologist and resuscitator.

In Latvia, the overall mortality rates are 17% higher

Mortality data are also analyzed by the Central Statistical Bureau this year. By September this year, 24,103 deaths have been registered in Latvia, which is 3,500 or 17 percent more than in the first nine months of last year, according to preliminary data compiled by the Bureau. Experts explain: the Covid-19 pandemic caused an increase in mortality, and this year the number of deaths each month was higher than in the corresponding months last year.