The prosecutor of the South Kurzeme Prosecutor's Office, Kaspars Didzis, has upheld the decision of the head of the Saldus Criminal Police Department, Jānis Ceļapīters, to terminate the criminal proceedings against Aivars Lembergs for calling former foreign and defense minister, member of the European Parliament and now opposition member of the Ventspils City Council Ģirts Valdis Kristovskis a "Cheka snitch".
23.11.2021. Uldis Dreiblats, Ritums Rozenbergs 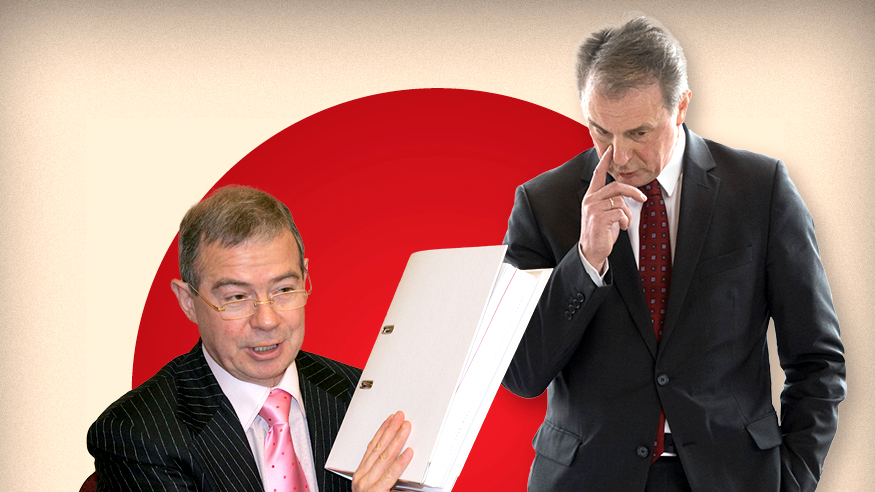 In the fight to open a criminal case against his political opponent Aivars Lembergs, Ģirts Valdis Kristovskis has so far lost convincingly. The prosecutor of the South Kurzeme Prosecutor's Office has decided to uphold the decision of the head of the Saldus Criminal Police Division not to open a criminal case against Lembergs. Officials believe there are grounds to the opinion that Ģ. V. Kristovskis has cooperated with the Cheka ©F64

Based on the application by Ģ. V. Kristovskis, on April 7, 2020, the Saldus Criminal Police Department initiated criminal proceedings against A. Lembergs under Article 157 of the Criminal Law for defamation, deliberate dissemination of false fabrications defamatory of another person.

The grounds for initiating criminal proceedings were statements of A. Lembergs addressed to Ģ. V. Kristovskis at the meetings of Ventspils City Council in the period from October 10, 2019, to February 13, 2020. Among other things, A. Lembergs allegedly told Ģ. V. Kristovskis "You are a thief!", "You stole public money!", "You stole millions!", "It is good that we overcame such traitors' opposition to Latvia's independence. That makes me happy!", "Rubenis, your curator, took you on as a Cheka agent, took you on as a snitch. Rubenis was your curator!", "Rubenis lead you. Snitch!" "You're still a snitch!", "He coordinated the candidates of the Popular Front with the Cheka. He coordinated with the Cheka! You studied as a snitch. You were put in the Popular Front by the Cheka. That is my opinion".

In assessing Ģ. V. Kristovskis' complaint and the circumstances of the case, police officer J. Ceļapīters concluded that there is no dispute in the criminal proceedings that A. Lembergs made the above-mentioned and other statements. From the case file, the investigator established that both Ģ. V. Kristovskis and A. Lembergs are both experienced politicians who often exchange harsh words in public. The investigation assesses whether Lembergs deliberately disseminated false statements that were defamatory of the other person, or whether he was simply expressing an opinion. J. Ceļapīters concluded that A. Lembergs had expressed his own opinion and that this opinion had been based on publicly available information, therefore there had been no deliberate dissemination of false and defamatory fabrications and the criminal proceedings should therefore be discontinued.

He himself described everything in his book Pieskāriens

Prosecutor K. Didzis, assessing the case of Ģ. V. Kristovskis' complaint against J. Ceļapīters' decision to terminate the criminal proceedings, concluded that the decision of the head of the Saldus Criminal Police Department was justified. "From the materials of the case, it is reasonable to conclude that the statements made by A. Lembergs about you (i.e., Ģ. V. Kristovskis) are based on the press publications about you, as well as on the facts described by you in the book Pieskāriens about your communication with the State Security Committee of the Latvian SSR, including the State Security Committee employee A. Rubenis mentioned by A. Lembergs. Lembergs' statements about you should therefore be regarded as his opinions and conclusions based on information available in the public domain, and not as deliberate dissemination of false, defamatory fabrications. From the content of Aivars Lembergs' statements, we conclude that Aivars Lembergs implies your association with the State Security Committee of the LSSR without specifying the content and extent of the cooperation. As I have already pointed out above, these statements of A. Lembergs are to be assessed as his opinion on specific facts, based on information available in the public domain," the prosecutor stated in the decision on the dismissal of the complaint.

Fully agreeing with J. Ceļapīters' conclusions, K. Didzis stated in his decision: “The statements addressed to you by A. Lembergs have been used in response to your opinion and objections regarding the issues on the agenda to be considered at the Ventspils City Council, as well as the processes taking place in Ventspils City Municipality in general. These statements by A. Lembergs are to be regarded as a rejection of your views and opinions as a political opponent, they are to be considered as A. Lembergs' subjective opinion, formed by subjective interpretation of information available for the public, including information you yourself had provided on communication with the State Security Committee of the Latvian SSR, as well as on your activities as a politician and public figure in the earlier period and as an opposition deputy in the Ventspils City Municipality. In view of the above, the statements used by Aivars Lembergs cannot be recognized as deliberately false, defamatory fabrications, i.e., as constituting a criminal offence under Article 157 of the Criminal Law. Moreover, as can be inferred from the content of the audio recording of the Ventspils City Council meeting of October 18, 2019, the members of the City Council are indifferent to the discussions between you and Aivars Lembergs and the statements made by Aivars Lembergs to you during the discussions."

The decision states that Ģ. V. Kristovskis has the right to appeal against the decision to a higher prosecutor within ten days.