Golubeva is pushing hate speech into the Law on Administrative Penalties

The attempt to grant special privileges to the LGBT community in the Criminal Law has been stopped, but the idea of restrictions on freedom of expression has not been abandoned altogether, and is now being pushed forward in a more moderate format in the Law on Administrative Penalties by the Ministry of the Interior, run by the Development/For (Attīstībai/Par) party alliance. It remains to be seen whether the Saeima will dare to open this Pandora's box.
25.11.2021. Imants Vīksne 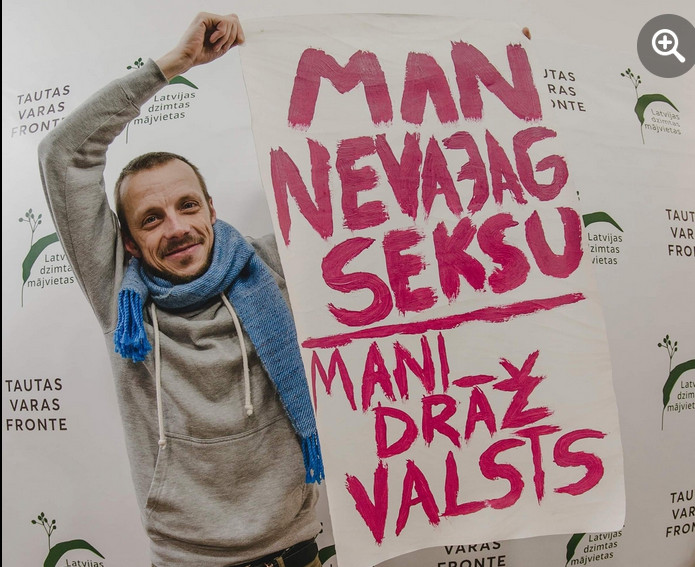 Compared to the proposals that were previously pushed in the Criminal Law, the current ones are much more moderate and might actually help to slow down the flood of anger so prevalent on the web. However, there is still the possibility that the new norms could be interpreted and used subjectively, preventing individuals from expressing critical views on developments, trends or certain groups in society, such as those fighting against traditional family values from the LGBT community. Declare views they do not like as an expression of social hatred and fine those who express them. The background and reasons for these activities have already been explained by Neatkarīgā in the publication "Minister Golubeva will order the police to mark hate crimes".

In the spring, the conservative wing of the Saeima succeeded in stopping restrictions on freedom of expression in the Criminal Law - the so-called criminalization of hate speech - pushed by lobbyists for the LGBT+ community. Hate speech would have no longer needed to have substantial consequences to be an offence. The idea failed because the majority of MPs saw risks to free speech in the proposed amendments. However, it's not yet over. The Minister of the Interior, Marija Golubeva, has taken personal charge of hate speech. This week, proposals for possible amendments to the Law on Administrative Penalties for Offences in the Field of Administration, Public Order, and Use of the Official Language were submitted to the Criminal Law Policy Subcommittee of the Saeima Legal Affairs Committee, and the Minister commented on her proposal as follows:

"Recently, there has been an increase in aggression, threats and intolerance in society, both in general and towards members of certain professions, such as journalists and medical professionals. Such actions are being carried out in both real and virtual environments. They undeniably increase intolerance, polarize society and disturb people's peace. We need to find a solution so that those who make aggressive threats, including on the internet, are brought to justice."

The Minister's proposed price list for hateful speech would be:

* For disturbing public order by means of an automated data processing system (by which is meant profanity on the web), a fine of between forty and one hundred and fifty penalty units shall be imposed. (200 to 750 euros)

* For threatening to commit murder or other serious crime involving violence by disturbing public order, a fine of between fourteen and one hundred fine units shall be imposed. (70 to 500 euros)

* For discrimination on grounds of racial, national, ethnic or religious origin or for violation of any other prohibition against discrimination, a fine of between fifty and one hundred and ten fine units shall be imposed. (250 to 550 euros)

* For an act aimed at inciting hatred or dislike on the grounds of a person's sex, age, disability or any other characteristic, a fine of between fifty and one hundred and ten penalty units shall be imposed. (250 to 550 euros)

The Minister also proposes to amend Article 11 of the Law by introducing a penalty for disturbing the peace of one person. A fine of between fourteen and one hundred fine units shall be imposed for disturbing public order by violating generally accepted norms of behavior and disturbing the peace of one or more persons, the work of institutions, merchants or other bodies or endangering the safety of oneself or others (petty hooliganism). (70 to 500 euros)

Dedicated to one weirdo

This last amendment is apparently dedicated to Jānis Sondars, a socially active anti-vaxxer weirdo who is prone to name-calling and threats against public figures. One of the victims of Sondars' hate speech was Minister Golubeva's friend Juris Pūce, who Sondars threatened with capital punishment in the street. This case was followed by a broader debate on the need to rein in all kinds of louts, and this debate provides a useful backdrop for the crackdown on so-called hate speech that failed in the spring. However, it is not yet known whether the Criminal Law Policy Subcommittee of the Saeima Legal Affairs Committee will take it upon itself to open up the law for such a minor need, because any law, if it is opened up for amendment, can receive useful changes as well as completely useless ones. It happens. The case of Sondars shows that, if the police are creative enough, an administrative article can be found even now. And for more serious cases, the Criminal Law, which was protected from unnecessary amendments in the spring, can be used, as it provides for penalties and actual imprisonment for incitement of social hatred and enmity, violation of the prohibition of discrimination and acts aimed at inciting national, ethnic, racial or religious hatred or enmity.