The installation of a monument in the cemetery of Red Army soldiers in the village of Kapsēde has brought to a close the story of the homecoming of the Aloja Freedom Monument, created by sculptor Kārlis Zāle. For three years the stand stood empty, and now a typical Red Army man has taken the place of the departed Latvian freedom fighter, because of the Consulate General of the Russian Federation. 30 years after Latvia regained its independence, a new monument to the Soviet occupation troops has been erected again.
30.11.2021. Imants Vīksne 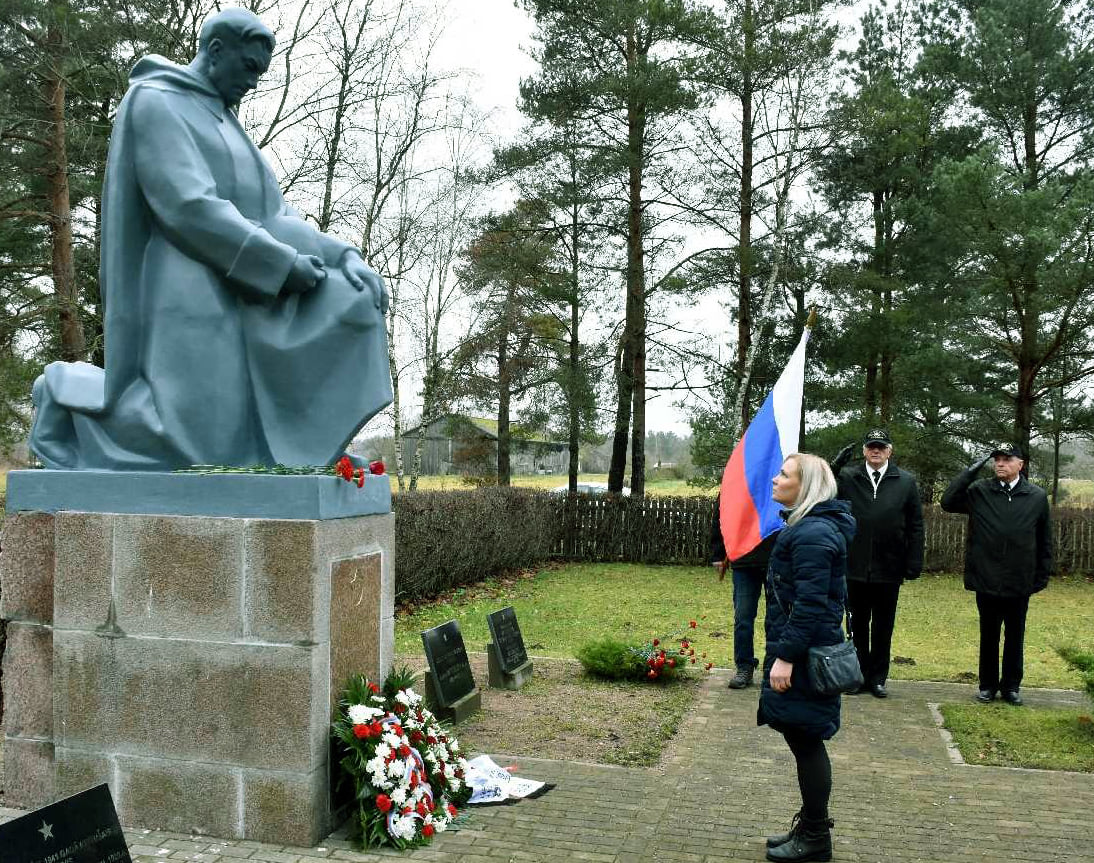 The Russian Consulate General has collaborated with local activists Elena and Yevgeny Osipov, known to Latvian security authorities as Kremlin's agents of influence, to create the monument ©Ekrānšāviņš

The monument designed by Kārlis Zāle - a working man with a sword in his hand - was to return to Aloja. Before the war, local people raised 12,000 lats to honor their countrymen who had fallen in the War of Independence. The state granted land. The monument was carved. However, it was not erected in time. The war came, and after the war - the Soviet power, and the Latvian soldier carved in granite ended up in a place where he definitely did not want to be. On a pedestal, on which it was written: ВЕЧНАЯ СЛАВА ГЕРОЯМ, ПАВШИМ В БОЯХ ЗА НАШУ РОДИНУ! 1941-1945 г. Not, as originally intended and now engraved: "The work for the glory of the fatherland, life - for freedom. For the freedom fighters." First, the sculpture made by Zāle honored the Red Army in Priekule. After the cemetery was reconstructed, in 1975 a local kolkhoz driver pulled the granite worker out of a pile of rubble, and the monument went on to other deceased members of the occupying forces. In the cemetery in the village of Kapsēde, Medze parish, Dienvidkurzeme municipality, where it was kept until autumn 2018 when it was taken to Aloja. To the place for which it was created.

Monument for a monument

Of course, an empty monument stand in a Red Army cemetery would be a major scandal if it had not been coordinated with the Russian Federation, the heir to the Soviet occupation power. And even despite that, a whole bunch of Red Army descendants dressed in sweatpants turned up when the monument was dismantled, who could only be calmed down with the help of the police and discussions. This is well remembered by the Vice-Mayor of the Dienvidkurzeme municipality, Aivars Galeckis. It did not come to a fight then. But it was clear that the stand could not remain empty.

Russia agreed to return the armed Latvian worker on the condition that it would replace him with a Red Army fighter of its own.

In March of this year, a coordination meeting was held, attended by representatives of the local government, the Consulate General and the Committee of the Brethren's Cemetery. Russia offered three possible types of monuments, made of molded composite material. The municipality chose the most neutral one - without stars, sickles and hammers. The message carved into the pedestal is enough.

The flood of propaganda is starting to flow

A few days ago, on November 27, the monument was officially unveiled. The mayor of the municipality was invited from Latvia, but he decided not to attend. And that was smart of him. The story of these two monuments is supposedly over, but the flood of propaganda that surrounds all the 600 and more monuments to Soviet power that are scattered all over Latvia along with dead Red Army soldiers, is only now beginning to flow. And it is flowing abundantly. The Kremlin propaganda media and its many offshoots are delighted that "a monument to Red Army fighters has been erected in Latvia instead of being torn down". And this is supposedly the first time in Latvia's recent history. This is, of course, complete nonsense, because the Russian Embassy in Latvia has been implementing a program of restoration of Soviet memorials for several years, against which the Latvian authorities are powerless. Only this October, a new obelisk was erected in Madona to glorify the Red Army and Soviet power. With the inscription in incorrect Latvian: "Eternal memory for heroes 1941-1945". And it is quite clear who these heroes were and what happened to the Latvian state as a result of their heroic deeds in the following years of the Red occupation.

Individually, there is a rational reasoning and a political justification for each such case of Soviet monument care, but, looking more broadly, we must conclude that the Russian Federation in Latvia does whatever it pleases with regard to its own monuments. With or without approvals. If it cannot reach an agreement with the Ministry of Foreign Affairs, it makes a deal straight with the local authorities. And it's done.

During the First Free State, the people of the Aloja parish donated funds to create a sculptural tribute to the members of the Aloja parish who died in the Latvian liberation struggle and in the war, and who won an independent Latvia. The location of the monument was originally chosen in the center of the then village of Aloja, at a road crossing near the Aloja railway station. The land for this purpose was obtained from the State Land Fund, but the installation was disrupted in 1940 by the Soviet occupation and the Second World War. After the Second World War, in 1975, the statue was placed in the Kapsēde Brethren Cemetery in Medze, Grobiņa municipality. In the course of time, it was included in the list of state-protected art monuments of national importance. Since 2008, the Kapsēde Brethren Cemetery has been under the jurisdiction of the Russian Federation. After decades of wandering, on November 9, 2018, Kārlis Zāle's monument to Latvian freedom fighters - a figure of a soldier with a sword - began its journey back home to Aloja. It was installed on December 8, 2018, in Aloja, Baznīcas street 4a.