Intro to the cartography of political orientation

All last week we were discussing in the editorial board that we should write a commentary on the new traffic light coalition government in Germany, which will replace the old Merkel black-red government in the coming days. But other current events prevented us from honoring this agreement. To get ahead of events, I will say that there will be no article on the new German coalition this time either. Why?
03.12.2021. BLBens Latkovskis 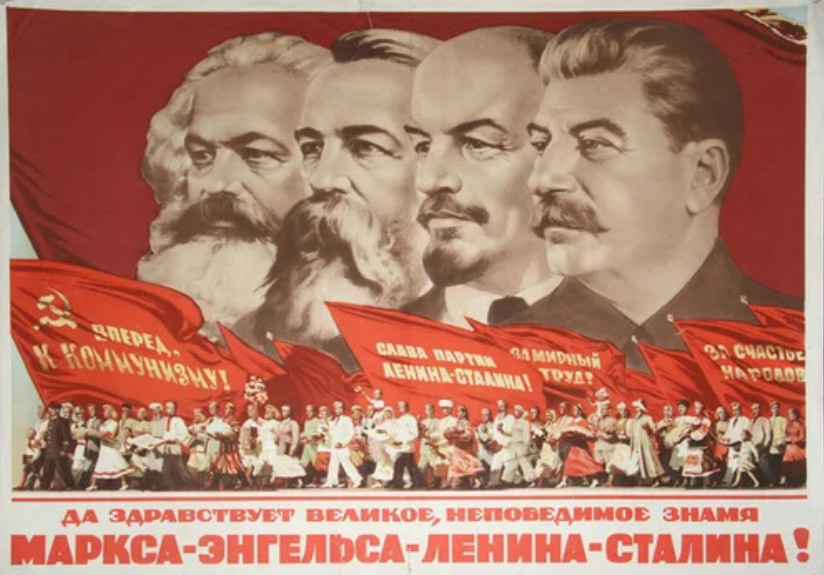 To talk about leftism or rightism on the political spectrum, one must first answer the question: was Stalin's empire left-wing or right-wing? ©PSRS politiskās reklāmas plakāts

Because before writing about the new - this time it really is a fundamentally new, distinctly left-wing coalition of the German political class - it is necessary to make a brief clarification on the question of political cartography. The way I see and understand it, because recently I have often seen accusations that "Bens is completely confused about political leftism and rightism". Without this explanation, it would be difficult to understand the political course not only of Germany, but also of other countries.

Let me first suggest why there is some confusion on this issue. I think the main reason is the political evaluation of the USSR and the so-called socialist bloc because for many people it is "real socialism" that they experienced in real life that is associated with left-wing politics.

In my understanding, a left (socialist) revolution took place on November 7/8, 1917, after which almost all Marxist/Engelsist theoretical dogmas were put into practice. The main ideological cornerstones were The Communist Manifesto, Das Kapital, The Origin of the Family, Private Property and the State, Anti-Dühring. But it soon became clear that the insights expressed in these fundamental works look beautiful and seductive on paper, but are horrible, bloody and destructive in practice.

Already in 1920, the new communist government realized that they were sinking deeper and deeper into the mire with their Marxist/Engelsist economic and social dogmas, but they did not want to back down either. It was only in March 1921, at the 10th Congress of the RCP(b), in the face of huge opposition from the most ardent communists (I have read the transcripts of this Congress and almost all the speakers were against it), that Lenin, thanks to his personal authority, managed to push through his NEP (New Economic Policy), which was clearly a huge step backwards from the left's point of view.

The final victory of the counter-revolution took place under Stalin in the 1930s, when previously denigrated concepts such as the family were once again honored, and previously forbidden words such as homeland were brought back into circulation. In other words, there was a return to the old, chauvinist traditions, only changing the visuals. The Czar was called the General Secretary, and the Holy Trinity was transformed into a four-headed line of faces - Marx, Engels, Lenin and Stalin. If communist dogma said that the state would die under communism, under the new Stalinist system the state became everything and man nothing. In the economy, slavery was restored with some feudal features - the number of slaves in the Gulag and the collective farms was several times higher than the peaks of the Roman Empire. The extremely right-wing system, despite the red flags, triumphed.

With some (in some cases significant) changes, this model persisted until the collapse of the USSR in the late 1980s. It was then (in the late 1980s, not the early 1990s), when the state lost its absolute supremacy over all the processes under its control, that the far-right system collapsed into the left flank. One might ask: but what was happening in the West at that time? Were Reagan, Bush Senior, Thatcher and Kohl, who were in power at the time, leftists? No. At that time, a right turn was taking place in the West (after the mini-revolution of the left in 1968), the two systems were rapidly converging, suggesting that Andrei Sakharov's theory of convergence was about to be put into practice. Francis Fukuyama wrote the naively optimistic book The End of History and it seemed that the long-awaited peace and stability, which had already been written about in the Bible (depicting the Garden of Eden), had finally arrived.

The world lived the last decade of the last century in such naive hopes, but the new century began with a new alienation. Russia moved rapidly to the right (China remained so all this time), and the West just as rapidly or more rapidly to the left. What do we mean by these concepts?

The whole idea of the left is based on the assumption that the world is unfair to begin with. It is not the man who is innately sinful, but the system that is "bad". There is no equality and oppression reigns (see The Communist Manifesto). There are oppressed and oppressors in all spheres. Moreover, the oppressors can be not only individuals but also social classes and even the state as the main and biggest oppressor. The role of the state must therefore be reduced with the prospective idea that it will disappear altogether in the future (see F. Engels' Anti-Dühring, V. Lenin's The State and Revolution).

This thesis of the role of the state on the left and right of the political spectrum misleads many by simplifying the understanding: a lot of state - left politics, a little state - right politics. The reality is quite the opposite. In this situation, the state acts as a right-wing, as a brake on the progressive left. I use the word progressive here without quotation marks because any organism (and humanity is such an organism) has a tendency to grow, to develop, to move forward, upwards. As fast as possible.

The problem is that if this growth happens too fast, then the plant in question becomes stunted, thin and weak. So sustainable development must be proportionate - like an oak tree. This, then, is the whole dialectic of political development, in which the best results come from the interaction of left and right vectors. In political practice, this is expressed in the regular alternation of these forces. It is for this reason that in my personal political choices I cannot count myself among either the right or the left. I try to keep a balance.

In the current political situation, where there is a significant tilt to the left in the West, I lean predominantly to the right. But the Covid-19 pandemic makes the ideological situation highly unstable. On many issues, the pandemic has introduced significant ideological adjustments. Even more. There is a rapid shift of the left to the right, to a strictly etatist (from the French état - state) position, brutally repressing any resistance to the dictates of the state. This is similar to what happened in the so-called socialist bloc countries.

To sum up. Leftist politics is one that, in spite of reality, drives humanity towards theoretically described ideals. What will come of this "drive" in practice, and whether many will suffer severely as a result, is a secondary or even a tertiary question. Right-wing politics is wary of these theoretical "ideals" because previous attempts to drive humanity with a whip into an imaginary "paradise" have always caused suffering and ended in failure. That is why progress must be slow, deliberate and gradual.

Obviously, this cautious slowness gets on the nerves of young, impatient and reckless people, who want the "kingdom of justice" as soon as possible. Tomorrow at breakfast time. After all, it could be achieved so easily, if only those old conservatives did not get in the way. A coalition built on such ideological principles is being established in Germany these days, but more about that in the next issue.