With the unpleasant events on Latvia's eastern border growing deeper and military and armchair experts already discussing when Russia's new attack on Ukraine will begin, it is worth recalling that Latvia's national security reserves of petroleum products are still stored abroad in significant quantities and that next year also almost a fifth of the fuel needed in the event of a crisis may not be available. Aviation fuel and petrol, although reserved in small quantities, are almost entirely held abroad.
04.12.2021. Imants Vīksne 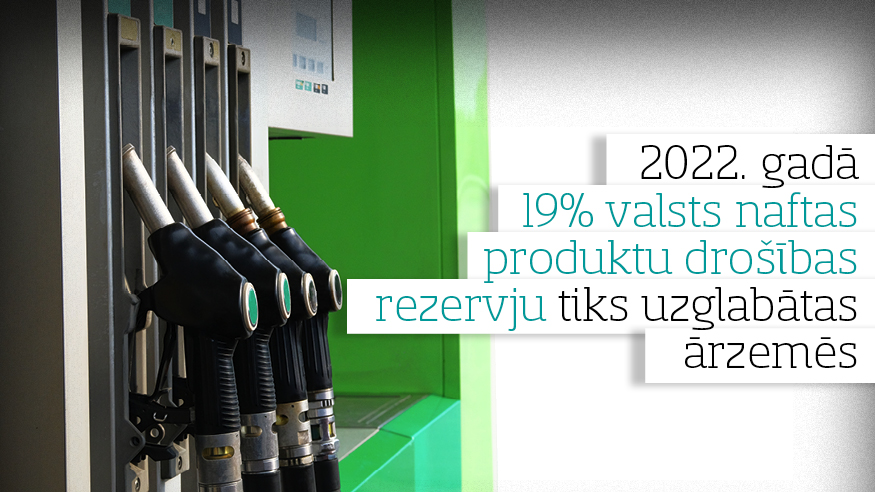 In 2022, 19% of the national petroleum product reserve will be stored abroad ©Neatkarīgā

The need for 90 days of petroleum product reserves is determined by a joint decision of the European Union. Each Member State must be able to live on internal reserves for three months in a crisis situation. This includes in the event of war. Fuel is needed for operational transport, for the government to manage the crisis, for possible evacuation of civilians, for military transport. Military transport, in particular, is very gluttonous. From this point of view, maintaining oil reserves is a far-sighted measure, even in spite of the high costs.

At present, 41% is located abroad on paper

But it is absolutely short-sighted to keep these reserves abroad, and what is more, not real reserves, but the rights written on paper to buy them if the need arises. Yes, fuel reserves in the current sense means that the right to buy fuel is reserved with private companies for tens of millions. Of course, at prices that will have skyrocketed in a crisis situation. And then wait to see how many weeks it'll take for the fuel to be delivered - one, two, three. And whether it will be delivered at all. "What do 20 days mean in a war?" Defence Minister Artis Pabriks asked indignantly last summer. "That everything is already over!" He was genuinely incensed because it had been agreed in the government earlier that the illogical arrangement would be changed, but under the contracts signed for this year, 41% of oil reserves are still stored abroad on paper. That is a lot.

The fight in the coalition is over

By paying for the storage of the strategic oil reserve abroad, Latvia is in effect providing this reserve to the country where the fuel is physically located, not to itself. If any big trouble breaks out in December, each country will think for itself and all previous agreements will be called into question. If, for example, Lithuania needs fuel itself, why should the government allow it to be exported to Latvia?

But there is good news too. The fight in the coalition over the storage of strategic oil has ended in favor of common sense. Foreigners will be gradually weaned away from selling this highly profitable service to the Latvian state. According to a decision taken by the government this summer, the amount of fuel that must be stored in Latvia must be increased to 75% in 2023, 85% in 2024 and 100% in 2025. In addition, the model for maintaining reserves is also being changed. In order to ensure the timely availability of petroleum products and the overall resilience of the country to a threat, the country will purchase the fuel itself, rather than reserve it for purchase. Basically, storage tanks will be rented from traders to store petroleum products, but the fuel itself will be owned by the state outright at the agreed amount.

The procurement for next year has just been completed. The procurement is still under the old procedure, as the transition to the new model has to start from the procurement procedure planned for 2022. However, the proportion of fuel stored abroad has been reduced beyond what is set by government rules. According to the State Construction Control Bureau, which is entrusted with (or rather pushed into) the administration of the national reserves, "in 2022, 81% of the national petroleum product reserve will be stored on Latvian territory, which is 18% more than before and exceeds the target set for 2023". The estimated contract price for the prior right of fuel purchase is 16 million euros. In total, contracts have been concluded with 11 traders for the storage of 304,400 tons of petroleum products. Of these, 57,400 tons will be stored outside Latvia.

GUNVOR PETROLEUM ROTTERDAM B.V, a company indirectly linked to the Kremlin's master Vladimir Putin, is no longer in this group. Good.