SIF will bring Christmas gifts to the Muslims in Mucenieki

The Society Integration Foundation continues its annual Christian campaign - Christmas gifts are being collected for the underage asylum seekers living in the village of Mucenieki. Most of them are Muslims. Muslims do not celebrate Christmas.
08.12.2021. Imants Vīksne 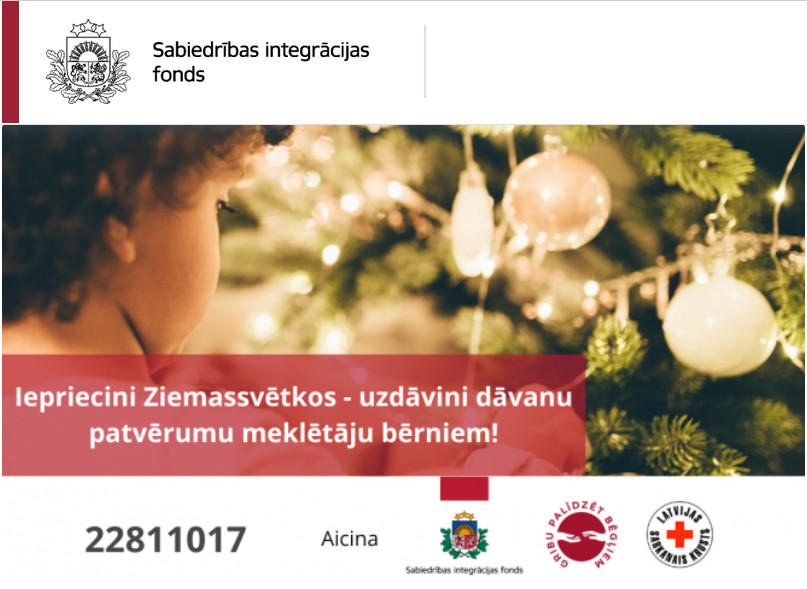 It is not customary to celebrate festivals like Christmas in the Islamic world. No birth of Jesus, no Christmas, no Christmas trees. And even more so no festivals in the modern consumer culture sense and manifestation.

Gifts for the Prophet

For Muslims, ostentation is unacceptable because it blasphemes rather than glorifies the faith. Against this background, the Society Integration Foundation's annual Christian charity campaign is a remarkable step - collecting Christmas presents for little Muhammad, named after the Prophet by his parents, and dozens of other children who are living with their parents in the Mucenieki asylum seekers' center. Here's what the campaign says:

"The charity campaign 'A Gift for the Children of Asylum Seekers' is now in its sixth year and this year calls for help for Rabia (6), Alexander (6), Sofia (3), Medina (6), Leila (13), Muhammad (1.5) and dozens of other children living in or outside the Mucenieki Asylum Seekers' Accommodation Centre. In most cases, these children come from countries such as Afghanistan, Belarus, Iraq, Russia, Syria and Congo, where their family members have been persecuted, there are conflicts or wars, so peer support is particularly important." Zaiga Pūce, Director of the Society Integration Foundation, stresses that Christmas and New Year's Eve are the warmest and most welcoming holidays of the year, and therefore invites: "Let's share the joy with those who need it most!"

A difficult time for Muslims

Whether the parents of the children will take a positive view of this Christian joy is of course up to them, but the Muslim community as a whole is dismissive of the joy of Christmas. This is how the Latvian Islamic Cultural Centre explains it: "For Muslims living in Western countries, Christmas is one of the most difficult times of the year, because our attitude towards this holiday and celebrating it as such differs from the generally accepted norms of society (...) Unfortunately, many Westerners believe that we Muslims should celebrate Christmas. They cite as examples other non-Christians who also share in the joy of this festival - Jews, Hindus, etc. They cannot accept that many Muslims refuse to bow to this social pressure. It is regrettable that they refuse to apply the same rules to themselves in order to celebrate Muslim festivals(...) There are people who consider it their duty to impose their festivals on us."

The Society Integration Foundation cooperates with other supporters of the open doors policy and migration - the association Gribu palīdzēt bēgļiem (I Want to Help Refugees), as well as the Latvian Red Cross - to bring the warmth of Christmas to Muslim children.

As such, charity campaigns are organized to fill a gap, to fill a void. But it cannot be said that the Latvian state does not care about asylum seekers. When they arrive in Mucenieki, they are fed, cared for, everything is available free of charge. Even the gym and the internet. In addition, they are also given a daily allowance. According to the Office of Citizenship and Migration Affairs, a total of 151,430 euros are planned to be spent this year on food and daily allowance for asylum seekers. The government has recently decided to allocate additional funding of 25,000 euros. It is another matter that migrants do not value this hospitality of the Latvian state very highly and at the first opportunity head towards Western Europe in pursuit of greater benefits or to achieve whatever goals they have. The difficulties of the journey and cooperation with people smugglers do not scare them. Children are deliberately put at risk because they successfully trigger the mechanism of humanitarian considerations that is mandatory for European services. Now winter is here, and a bunch of migrants have gotten delayed in Mucenieki. It is unlikely that they will celebrate a Christian Christmas in their groups. But the children will be happy with the presents provided by the Society Integration Fund. Of course, if the adults allow it.