Another wind farm proposed in Kurzeme

This is an excellent moment for wind and subsidy businessmen to lobby their interests. The price of electricity on the stock exchange has skyrocketed and the public can be sold the idea that windmills will solve the problem. In the districts of Piltene and Tārgale in Ventspils municipality, a new wind turbine park is proposed again. Next to the village of Gārzde, which once successfully fended off OIK businessmen.
09.12.2021. Imants Vīksne 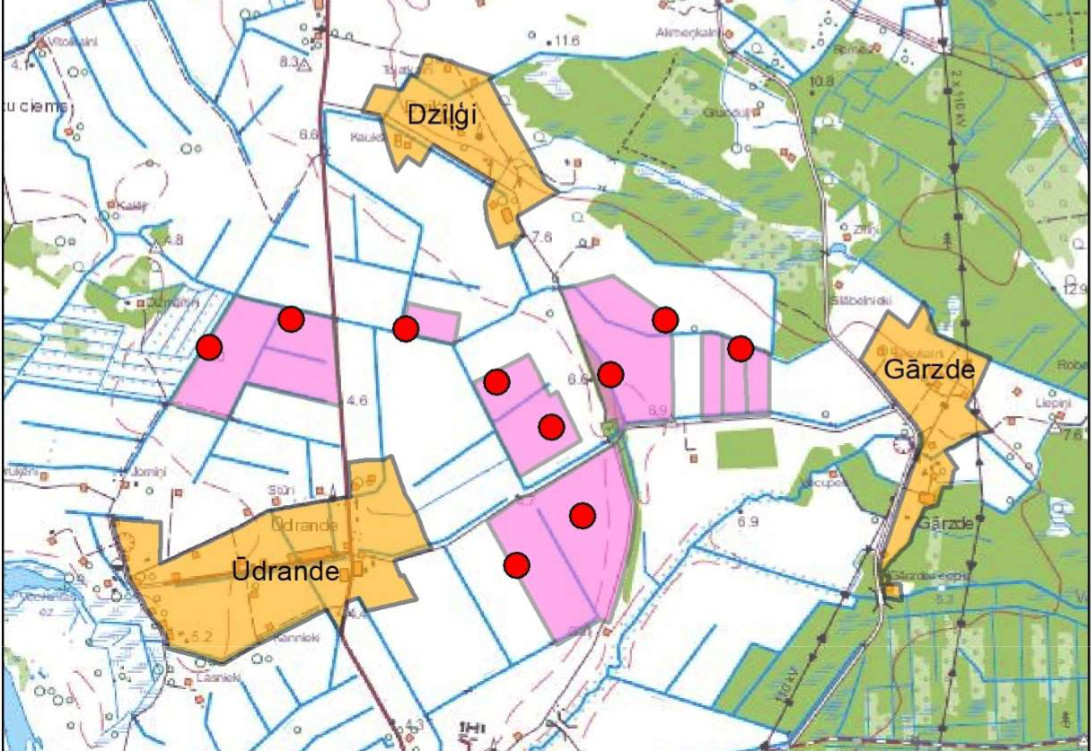 This is a mixed agricultural and forest area, which transforms completely in spring and autumn when migratory birds - bean, barnacle, white-fronted and wood geese, tundra, mute and whooper swans, cranes and other migrants - land here to rest after flying over the sea. Possibly the most beautiful bird observatory in Latvia. The first attempt to get rid of the birds and, at times, the inhabitants took place 12 years ago, with deceit and lies. However, local people managed to expose the OIK businessmen.

Lying their way to their goal

At the time, it was revealed that there was no legal basis for the detailed planning consultation and that the location of the wind turbines itself did not comply with the existing spatial plan. Wind farms are not allowed to be closer than one kilometer to Piltene and its villages. The company tried to circumvent this restriction by simply moving the village center away in the new spatial plan, reducing the boundaries and marking out only six of the 22 houses in Gārzde village, making the rest single-homestead settlements. The intended ploy by COWI LATVIA and the Danes behind it did not work. And then, "due to the decline of the Latvian market potential", the Danish consultants sold the company. This example shows the methods that wind businessmen are prepared to use to achieve their goals. Gārzde was left alone for ten years. Until autumn this year. Now the Danish wind businessmen have been replaced by a supposedly Latvian company, TVE, but it is probably just preparing a project for a bigger customer from abroad. The real beneficiaries of the planned Gārzde park are the same as those of another wind company, BRVE, which has applied to build a wind park in the Gaiķi and Remte districts of Saldus municipality. Neatkarīgā has already reported that around 1,500 wind farms are currently planned to be installed on land throughout Latvia, and in particular "The expansion of wind farms continues in Kurzeme."

The wind farms that Scandinavian profit-seekers dreamed of planting in the Latvian landscape a decade ago were tiny compared to what is being planned now. Modern turbines reach heights of up to 250 meters. That's like six Freedom Monuments. And in Kurzeme, these giant poles are to be lined up in a dense chain. This is also a cause for concern, because these industrial giant constructions will degrade the landscape, which is inscribed in Latvia's cultural canon, and will irreversibly destroy the land. Thousands of tons of concrete will have to replace the soil in meadows, fields and woodlands in order to install the generator poles. Of course, such considerations are unpopular in the context of the green course taken by Europe, and the wind business lobby is successfully campaigning for its own interests. Paid publications question the usefulness of the environmental impact assessment procedure for wind farms, including the right of local communities to decide about their environment, while new mechanisms to support wind energy and a more favorable regulatory framework are being pushed through the Ministry of Economics.

Harvest does not affect the price

Achieving the renewable energy target is now politically more important than people's right to live in a healthy environment and nature protection. The state-owned energy company Latvenergo is also planning to step up its efforts to build wind power plants. This is according to the latest Energy Market Review. However, unlike foreign profit-seekers, the state-owned company at least promises to maintain a dialogue with the local population and a compensatory mechanism for municipalities so that the population receives a tangible direct benefit from the wind farm.

It would only be fair if all wind entrepreneurs shared their profits with the wider community, whose quality of life is being undermined by their business.

As for electricity prices, they will not be significantly reduced by the expansion of the wind business, because electricity is sold on the stock exchange, and just as a good grain harvest in Latvia does not reduce the price of bread in the local shop, so wind electricity produced in large quantities will not be sold at a lower price to the residents of Gārzde or Gaiķi. Otherwise, the business sense of wind would be lost - to maximize profit with minimum expenditure.

The public discussion on the proposed construction of the wind farm BRVE in the Saldus region will continue until January 3. The public discussion meeting will take place remotely on December 17. A total of ten wind park projects are currently undergoing the environmental impact assessment procedure. More information can be found here.