Approximately 60% of the population fear that the Covid-19 pandemic will increase income inequality, according to EY's (formerly Ernst & Young) latest Connected Citizens survey, conducted in 16 countries around the world, including Latvia, Lithuania and Estonia.
09.12.2021. Ilze Šteinfelde

EY Connected Citizens is a large-scale study of public priorities and concerns, as well as public attitudes to the rapid pace of technological development.

"Our research shows that people in Latvia generally want more online cooperation with the state - 39% of people put this as a top priority for the state in developing a digital society - but alongside this, we see a clear concern about inequality - both as a result of Covid-19 and as a result of technological developments in general. It is critical for Latvia to take into account the uneven pace of digital transformation and the pandemic's impact in order not to lose the engagement of a large part of society in the economy," says Nauris Kļava, EY Latvia Advisory Partner.

The survey data reveals that 64% of the Latvian population expects the role of technology in their daily lives to increase as a result of the pandemic, while 60% of the population is concerned about the worsening income inequality.

In Estonia, the figures are relatively similar - the increasing role of technology is also seen as the main effect of the pandemic, with 62% of Estonians expecting it, but 51% of Estonians are worried about increasing income inequality - slightly less than in Latvia. In Lithuania, economic growth is expected to be the main effect of the pandemic (57% of Lithuanians think so), while the role of technology is expected to increase only by 37% of Lithuanians, while 41% of Lithuanians are worried about worsening income inequality. 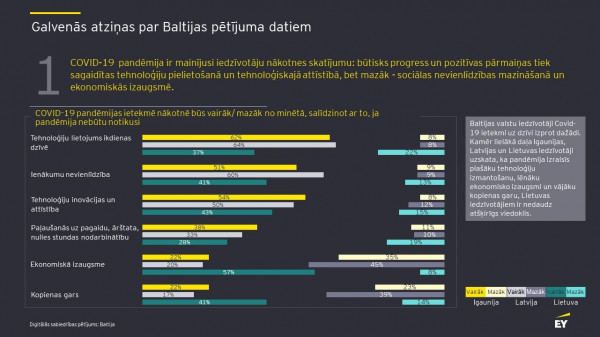 Nauris Kļava notes that there is a significant difference between the opinions of people in Latvia and Western Europe on the impact of the pandemic. For example, in Germany, the crisis is most expected to lead to an increase in government spending on social security (49% of Germans think so), while the growing role of technology is cited as the second main trend that will result from the pandemic - 48% of Germans expect this. At the same time, only 41% of Germans are concerned about rising income inequality. In France, 42% expect an increase in the role of technology due to Covid-19, while only 34% expect an increase in income inequality.

Latvians would like to react online to local government decisions

In the context of concerns about inequality, the majority of people in Latvia, 58%, said they would be willing to participate in a government training program to improve their digital skills. These figures are remarkably similar in both Lithuania (63%) and Estonia (58%). Similarly, people in Latvia are actively interested in becoming more closely involved in state and local government through online channels. For example, 73% of Latvians would like to use online voting to make decisions on various municipal services, while 70% would like to use online apps to communicate with their municipality about day-to-day issues and problems, and 64% would use an app to express their views on development plans for their neighborhood. And 67% of people in Latvia would like to use online voting to evaluate or even recall elected officials between elections.

According to EY Connected Citizens, only 25% of Latvians believe that the government and public authorities have used digital technologies effectively in the fight against the pandemic, while 63% believe that the government's handling of digital solutions has been either very or somewhat ineffective. This situation differs significantly in Estonia, where 44% of people consider the government's response using technologies to be very or fairly effective (the same proportion consider it to be fairly or very ineffective). In Lithuania, the assessment is more similar to Estonia, where 41% of people rate the State's response as effective, and 48% as very or somewhat ineffective.

One of the main objectives of the study was to explore what the public expects from government and public services.

"We hope that the findings from the study will enable us to open a discussion with government, public service organizations and entrepreneurs about how they can better meet the ever-growing needs of the population," said the study's authors.