On Tuesday afternoon (Moscow time) or in the forenoon (Washington time), US and Russian leaders Joseph Biden and Vladimir Putin discussed the Ukraine issue over a secure video channel that was set up back in the days when Barack Obama used to travel to Moscow with his Russian mistranslated "Reset" button.
09.12.2021. BLBens Latkovskis 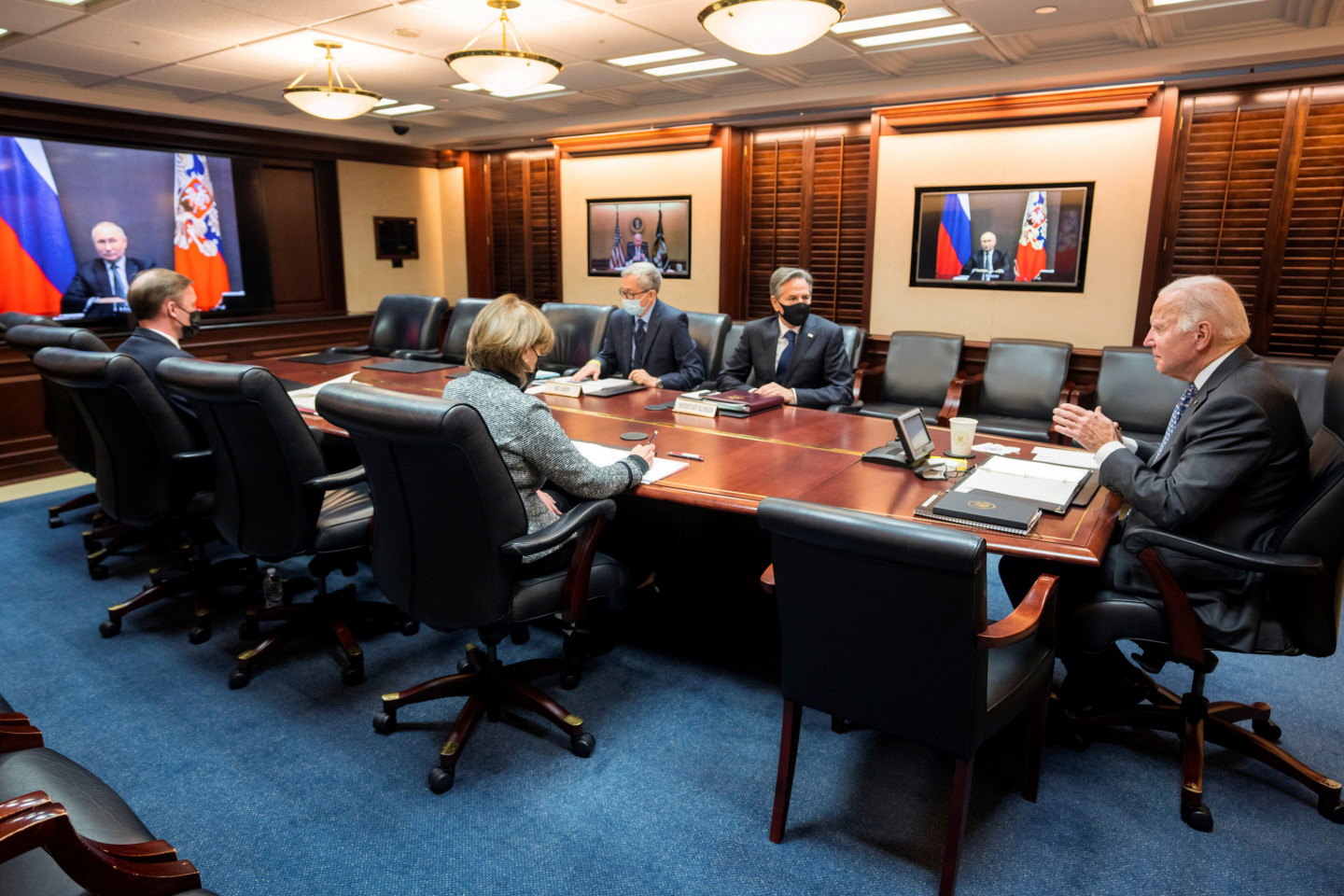 In Russian, it was misspelled Peregruzka (overload) instead of Perezagruzka (reset). As subsequent events show, this misspelling proved to be significant, and Russia's relations with the US and other Western countries went down the road of overload - that is, of increasing tension.

The main, not to say the only, topic of Tuesday's videoconference was the situation around Ukraine. The main question, which led to the first use of this eavesdrop-proof video communication system, was one: will there or will there not be war in Ukraine? Will Russia launch a large-scale invasion of Ukraine or not?

Before assessing the results of the talks, it should be noted that this was the first time that talk of possible Russian aggression in Ukraine had started specifically from the West, as earlier it was mainly Ukrainian and Russian observers who had warned of threatening maneuvers on the Ukrainian border. Until now, Western public opinion has been led to believe that Russia is just saber-rattling and there will be no war, because the entire Russian elite is closely linked to the West, financially and even purely socially, so it is not as if they are going to give it all up because of some phantasmagorical plans. This time, it was the US intelligence services that "leaked" information to the serious media (Bloomberg, the New York Times and others) that Russia was seriously preparing an attack on Ukraine, and various experts confirmed that the threat must be taken as real.

A similar military situation was already developing in the spring, and then Biden's call and the agreement to meet in Geneva stopped the escalation. However, Putin obviously did not get what he wanted from the Geneva meeting and the situation is repeating itself. The concentration of Russian troops on the Ukrainian border is increasing and the threat of a military invasion is becoming more real.

Moreover, as almost all experts point out, the overall situation is particularly favorable for Putin: the West itself is torn by various opposing opinions, exacerbated by the exhausting pandemic and the relentless migrant crisis; energy prices have reached unprecedented levels and the winter conflict with Europe's main gas supplier threatens unpredictable cataclysms; the US is focused on containing China, which makes no secret of its desire to be dominant in South-East Asia and settle the Taiwan issue militarily.

Conflict with Russia is completely at the wrong time for the West at this juncture, and the West would be prepared to go to great lengths to avoid it. Therefore, the answer to the question posed at the beginning - will there or will there not be war - depends to a large extent on the answer to another question. What does Putin want more - to put Ukraine "in its place" (by annexation, partial annexation, conversion into an absolute vassal state or otherwise) or his recognition in the eyes of Western leaders as an equal, as a highly respected politician, as one of the most influential world leaders, if not the most influential, without whose knowledge no decision of any global significance is taken?

If Putin really wants the second (recognition) option, then there is hope of avoiding war. But there is another problem. The West can easily accept the idea of sitting down with an authoritarian tyrant for the sake of peace, but it will find it much harder to accept that it is Putin who will dictate the rules. But only on those terms is Putin ready for "peace". That is to say, the old Putin formula must be accepted: the five (really only three) permanent members of the UN Security Council divide the world into spheres of influence, with each of them responsible for order in its own zone. France and Britain can technically only be entrusted with Africa. In other words, we need to return to the order under which the world was divided, first in Moscow and Berlin in 1939, and then in Crimea and Potsdam in 1945.

But such a model is totally at odds with the directions/ideals by which today's Western society lives. Putin, for his part, does not believe in these so-called values. He believes that all talk of values is just a smokescreen under which it is easier for the West to "sort things out" and fool the losers. Putin recognizes the old maxim that if you are not prepared to die for an idea, then that idea has zero value. He is convinced (very probably wrongly) that the West is not prepared to die for anything. That is to say, as long as no one drops bombs on their own heads, they will try to avoid war to the last.

The threat of economic sanctions, on the other hand, is about as effective on Putin as the threat of divorce by an alcoholic's wife if her husband does not stop drinking. Especially when these threats have been made for years and the only result is a symbolic sanction just to tick that checkbox and an expression of "deep concern".

A more effective way of achieving peace would therefore be to give a counteroffer, which, from the scant information available on these talks, Biden has made to Putin as a positive alternative to "the heavy price Russia will have to pay if it chooses the path of aggression". The Kremlin statement, which was also published much later than the White House brief, said that the relevant services had been instructed to develop the preconditions for further consultations.

The threat of war may therefore be said to have been averted in the short term, but unfortunately it is not the end of the story. At no point, Putin is expected to say (even indirectly): "Ok, I got what I wanted, and we can go on living peacefully as before, that is, as in the early 2000s". Sooner or later, the West will have to answer a fundamental question in its relations not only with Russia, but also with China: how much is it willing to concede to a brazen blackmailer?

In the post-Soviet space, it has been known since the 1990s (especially to Putin, who was deeply embedded in the system of putting everything in their places of the time) that a bandit has no boundaries or red lines when dealing with "losers". The "loser" has to make concessions that the bandit deems necessary (economically viable) at the time. From the Kremlin's point of view, Russian-Western relations have long since become like this, with the "losers" shaking their fat wallets and talking about the arsenals of weapons supposedly in their warehouses, while the bandit, with bare hands and a brazen look, takes as much as he needs from their wallet and demonstratively pisses on the weapons stacked in the warehouse.

I stress that this is from the Kremlin's point of view, not objective reality. However, in order to understand the motivation and possible future actions of the other side, this subjective perspective must be taken into account. There is, however, one important nuance in this vision that may save peace in Ukraine and the world. This nuance is that Putin does not consider the whole of the West to be a "losers", but only a part of Western Europe. The US and its "zapravila" (ruler, in Russian bandit slang) Biden are not only seen as equals by Putin's team, but they are even prepared to acknowledge them as the main one, as long as he has the boss of the Chinese "big family" on one side of the table and Putin on the other. The others are allowed to speak only with the gracious permission of this trio.

Will the West be prepared to go along on these terms? My personal opinion, which is not based on any in-depth research, is that Europe probably will, but that the US political class may find it very difficult to accept that they have to treat a Russian leader with less than 2% of world GDP as an equal partner. And as an equal, not formally, not kind of, but truly, in every detail and aspect, because as soon as Putin feels that he is not being treated with enough awe and respect, the blackmail will start all over again.

So, my personal prediction is that the threat of military conflict has now diminished, but that, sooner or later, the resolution of all these long-standing global entanglements will anyway be resolved by the same methods as in all previous human history. Namely, by war, when it finally becomes clear which ideas are winning and which have the right to continue to exist, and which have a place in the dustbin of history. It is to be hoped that this will happen as late as possible.