The crime of Jussie Smollett is a sign of the times

In April of this year, a wave of hatred swept over Latvia. The umbrella organization of the LGBT+ community, Mozaīka, circulated loud posts on social media with numerous exclamation marks and the words - Hate!!! Hate!!! Hate!!! A man was burned to death in Tukums because of homophobic hatred.
16.12.2021. BLBens Latkovskis

Jussie Smollett was accused of staging a "hate crime". He was found guilty by a jury of staging the attack on himself ©Ekrānšāviņš

For two days, both on social networks and in the serious media, passions were running high about this chilling, mind-boggling crime - unknown perpetrators caught a gay man in a stairwell at 4am, doused him with petrol and set him on fire. But it soon became clear that all was not so clear. Even more. In the end, it turned out that there had been no "hate crime" at all. There had been a tragic accident, possibly a suicide.

I would not mention this truly tragic case unnecessarily, because a man has died and it is not his fault that certain personalities, groups of people, tried to exploit this tragedy for their own ideological games. The problem that makes it necessary to mention this tragic incident is different. Such methods of "ideological struggle", when hatred that does not exist in real life is invented, are used by the LGBT+ community not only here. It looks like a systemic problem, and systemic problems need to be talked about because they do not end by themselves. On the contrary, in the absence of resistance, such methods of struggle are becoming more and more brazen and more frequent.

Last week, a similar case was legally confirmed in the US. It is true that it is much more cynical, but at the same time much less tragic. All the more disgusting for that. It is the case of Jussie Smollett. Smollett is a black American actor who began his film career as a child. His best-known adult role is in the TV series Empire, where Smollett plays the gay son of the main character. He is also openly gay in real life.

At the end of January 2019, Smollett announced that he had been attacked by two masked men wearing MAGA (Make America Great Again) hats, shouting racist and homophobic slogans, dousing him with white powder, placing a noose around his neck and planning to carry out a symbolic lynching. The attack took place at 2am, when he was returning home from a night out at a pub. Smollett called the police and met them with a noose around his neck.

The whole event was filmed and shared on social networks. As this incident took place under President Donald Trump, when the thesis that Trump was inciting racial hatred and homophobia was repeated every day in countless variations, the racist attack on a black gay man was elevated to the national level as the most important news of the day. Every self-respecting politician in the Democratic Party felt it necessary to mark the crime with strong condemnation, support for the victim, while at the same time taking a swipe at their political rival. Joe Biden, then presidential candidate, tweeted: "We must stand up and demand that we no longer give this hate safe harbor; that homophobia and racism have no place on our streets or in our hearts. We are with you, Jussie." The chorus of outraged voices was joined by Democratic leader in Congress Nancy Pelosi, current Vice President Kamala Harris and other opinion leaders. 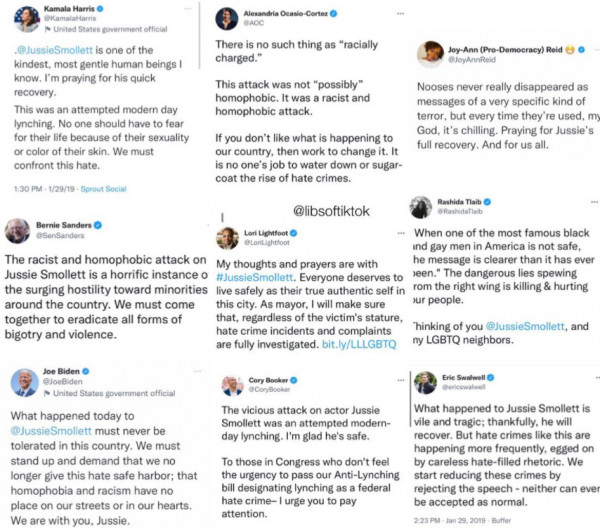 The case took on national dimensions. The Chicago Police set up a special investigation team of 13 detectives who reviewed hundreds of security camera tapes. Soon, the police were on the trail of the racist homophobes in red MAGA hats. They turned out to be two acquaintances of Smollett, the Osundairo brothers. Abimbola and Olabinjo. Not even African-Americans, but real Africans from Nigeria. In other words, the truest racists, rednecks and ardent Trump supporters. They confessed that Smollett paid them 3,500 dollars to stage the attack. Smollett denied this, claiming that he had paid them as physical trainers because the brothers were body-builders and had participated in a film shoot with Smollett, but on further investigation the police also found a security camera footage from a shop of the brothers buying MAGA hats, black ski masks, dark glasses, gloves and a rope for "lynching".

The local prosecutor's office charged Smollett with staging a racially motivated crime, but the charges were dropped a few weeks later without any explanation. A storm of outrage erupted and special prosecutor Dan Webb was appointed to independently investigate the case. In February 2020, Smollett was indicted on six counts. The trial began on November 29 this year with a very careful and difficult selection of jurors, because it was necessary to find people who could not be suspected of any kind of bias.

Although one might think that everything was clear in the case, Smollett's defense was based on complete denial: there was no staging, the attack was real, and the Osundairo brothers are shameless liars who are slandering him. It should be noted that Smollett had a sexual relationship with one of the brothers, which Smollett himself admitted. However, in court, Smollett avoided identifying his assailants. Maybe it's them, maybe it isn't. Smollett's ironclad determination not to confess, his brazen wriggling out of clear answers, surprised even the special prosecutor Webb, who, in the Chicago Tribune's report, seemed helpless in those moments.

However, on December 9, the jury returned its verdict: Jussie Smollett was guilty on five counts out of six. This does not mean that the case is over, as Smollett's lawyers have already stated that this is only a first instance verdict, which will certainly be appealed.

Unfortunately, this case has turned from a purely legal one into a politically ideological one. In a sense, it is a sign of the times, pointing to the emergence of a system in which the courts are judged not according to the principles of justice, but according to political expediency (usefulness). Such a system can hardly be called democratic and legal. This is true for both the US and Latvia and, as history has shown, it is easy to go down the path of the politicization of the courts. What is difficult is getting back on the path of the rule of law. This must not be forgotten.