The German newspaper Bild has published an article damaging Latvia's reputation. North Korean billions are being laundered through our banks, the supervisory authorities are covering up a flood of dirty money from Russia, and the Minister of Justice and the head of the Legal Affairs Committee have both been paid a 500,000 euros bribe to allow the PNB Bank to be robbed.
17.12.2021. Imants Vīksne

Although the minister and the MP are not named in the publication, the time when the events described unfold refer to the Minister of Justice of the Republic of Latvia, Jānis Bordāns, the Member of the Saeima, Juris Jurašs, and the Prime Minister, Krišjānis Kariņš, to whom the cover-up at the highest level of public administration and banking supervision was allegedly reported. 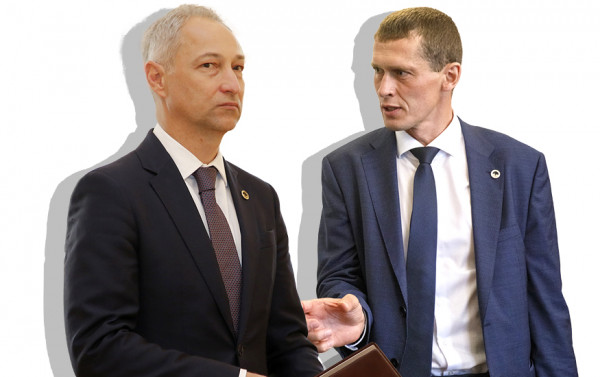 If such a publication had been made five years ago, when the destruction of Latvia's largest national bank began at the behest of the US government, it would even be understandable. Hitting someone when they are down is common, and Latvia did not defend itself at the time, even though the basis for most of the accusations made at the time has not been provided and most probably does not exist. For example, about the same North Korea and corruption in the billions of euros. None of this has been confirmed. But the article was published on November 1 this year, when the overhaul of Latvia's banks had been declared successfully completed for some time.

The calm before the storm?

In Latvia, the Bild publication "Mafia-Krimi in Lettland. Ex-BND-Chef und Ex-Nato-Boss Opfer eines irren 'Bankraubes'" has so far had absolutely no resonance. Not with the general public, because we don't have that many German speakers, and who cares about the whining of some Supervisory Board members of a dead bank. Of course, the Latvian special services, the banking supervisory authorities and especially the officials affected by this article are interested. They probably hoped that nobody would notice. But somebody did.

Bild is a German tabloid, basically yellow journalism, where serious subjects, politics and economics, are interspersed with all sorts of juicy trivia, rumors, crimes and scandals. It is Europe's largest and most influential German newspaper, respected by politicians and read all over the world, despite its obscene editorial style. Print circulation exceeds one million copies, while digital is available to everyone, including in Latvia.

And Latvia's reputation is now severely discredited in the international arena because of this publication.

These questions need to be answered

Even if 99% of what is written in the article is nonsense, made up by carelessly skimming over old banking scandals in Latvia and compounded by one litigant's fight for survival, the Latvian politicians mentioned in the article need to debunk this nonsense. If they do not, then logical questions arise:

* Are the supervisory authorities - the Financial and Capital Market Commission and the Financial Intelligence Unit - really covering up the laundering of Russian mafia money through Latvian banks?

* Did the Minister of Justice Jānis Bordāns and the Member of the Saeima Juris Jurašs really receive a 500,000 euros bribe?

* Have corruption and criminal offences really been reported to the Prime Minister Krišjānis Kariņš, but he has not intervened?

Neatkarīgā sent these questions to the addressees, but until the answers are given, everyone can read the scandalous publication. Those who can - the German original. For the rest, the translation tools will have to do: "Mafia crime thriller in Latvia. Ex-BND chief and ex-Nato boss victims of a crazy 'bank robbery'".

The article must have an impact on the proceedings

The Bild publication explains that August Hanning (75), the former head of Germany's BND federal intelligence service, and Anders Fogh Rasmussen (68), the former NATO chief, were victims of a "bank robbery" allegedly organized by the Latvian state. And without going into the details of the German tabloid's sensationalist language, the following text makes it clear that very serious accusations are being made against the Latvian state.

The story of the publication revolves around the credit institution in liquidation, JSC PNB Bank, where Hanning and Rasmussen were members of the Supervisory Board. It should be recalled that in the summer of 2019, the European Central Bank declared PNB Bank to be in financial difficulties (failing or likely to fail). The bank's financial services have been suspended and its liquidation is ongoing. For more on the latest developments in the process, see this summer's Neatkarīgā publication "PNB Bank has a shortage of 200 million euros." But at the same time as the liquidation process, a civil lawsuit against former employees of the bank is also ongoing, with Hanning and Rasmussen among the 11 defendants. The administrator of the insolvent PNB Bank, Vigo Krastiņš, has filed a lawsuit to recover 32 million euros from the former members of the bank's Management Board and Supervisory Board for damages suffered by the bank. The origin and purpose of the Bild publication are thus becoming clear. Hanning is on trial in Latvia, and Hanning is the main source of the publication discrediting Latvia. Latvia is to blame. The first court hearing took place on December 8, the next one is expected at the end of February.

Six serious charges against the state

Hanning and Rasmussen maintain their position in court and in the public domain that they had no knowledge of the bank robbery. It is, of course, hard to believe that the long-standing custodians of NATO and German state secrets, the grandmasters of intelligence, had such an affair happening right in front of their noses and did not notice it, poor dears. But that is for the two old men and the court to decide. (The Bild publication even emphasizes the age of the two men, as if that would give their claims more credibility.) But Neatkarīgā is more interested in the accusations against the Latvian state and its officials, which have not been discussed publicly so far. Here is the amateur translation of these quotes:

1) "The former BND chief now makes serious accusations in a letter to the German embassy in Riga: 'I have information that the central bank was persuaded not to interfere by bribing the Latvian Minister of Justice and the Chairman of the Legal Committee. The bank allegedly paid them both 500,000 euros'".

2) "They both thought, so Henning tells Bild, that we were in a normal EU country where banking and EU laws are in force - but they both woke up in a criminal mafia drama! Because: both have been left with the bill for a state-sanctioned bank robbery. So they both now suspect fraud and corruption right up to the highest government offices."

3) "Not only Hanning wrote a furious letter, but also the former NATO boss Rasmussen - to the head of the Latvian government."

4) "The Rasmussen/Hanning case is not unusual for Latvia. Latvia is a stage for dark machinations - and one of the most important money laundering sites for Russian oligarchs, mafiosi, politicians and secret services. For 30 years, money from Russia's dark channels has been secretly funneled through here into EU banking. North Korea is laundering billions here and making them disappear."

5) "Criminal bankers and corrupt state watchdogs show up again and again. And again and again, bankers who knew too much or wanted out of the game are dying."

Is this really a country that steals?

The only deceased named in the publication is Mārtiņš Bunkus, but he was known to be a professional bank liquidator, not a banker. Neatkarīgā also found other clear fallacies in the text which cast doubt on the claims made in the publication. However, it would be in Latvia's interest in this situation not to ignore some yellow German rag, but to say officially and loudly that Latvia is not a country that steals, not a country that launders Kim Jong-un's money, and that Latvia is not run by corrupt thugs. If it is otherwise, the guilty must be put in prison.