MoH Daniels Pavļuts: We managed to build a totalitarian state in one year

In a few weeks, it will be one year since Daniels Pavļuts became Minister of Health. On January 7, the Saeima voted in favor of his appointment, and two days later, on January 9, he gave an interview to TV3 in which he said, among other things: "Voluntary vaccination is a fundamental principle of vaccination." And after a short pause, he added: "I would not want us to become a totalitarian state."
22.12.2021. BLBens Latkovskis 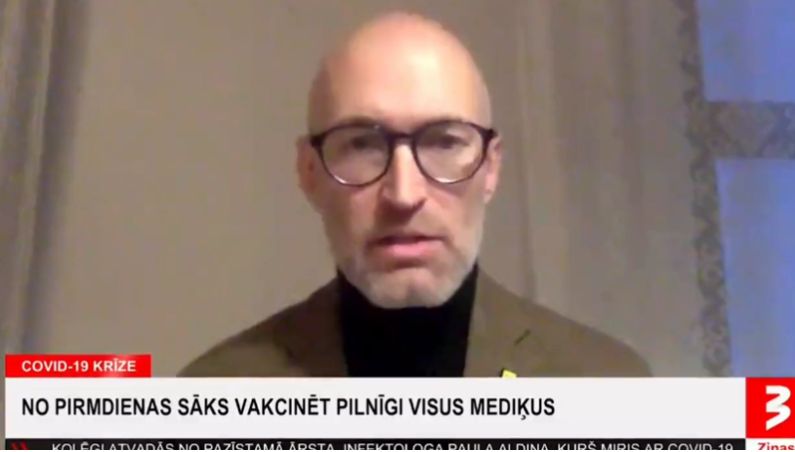 There is no doubt, now that this part of his interview is circulating on the Internet, Pavļuts is thinking to himself: why did I ever say that remark? "A fundamental principle of vaccination" would have sufficed, but no, I just had to make that completely superfluous remark about a totalitarian state. But there is a simple explanation for this candor of Pavļuts. He had just become a minister and, as usual at such times, he was determined to do the job he had been entrusted with to the best of his ability, in accordance with his own ideas of right and wrong.

At that time, he must have been convinced that he was a true democrat who hated totalitarianism, whatever its forms. If someone had told him a year ago how his worldview would change during that year, he simply would not have believed it. Just as many people in Germany in 1932 would not have believed it if someone told them that in a few years' time they would be ardent Hitler fans.

What 2021 has brought to the world is undoubtedly an extremely clear demonstration of how thin the veneer of democracy and humanism really is in the collective consciousness of humanity. The fact that a section of society is subjected to segregation and blatant discrimination seems not only acceptable to another section of society but even welcome. A large number of supposedly educated people, who just yesterday were preaching tolerance and diversity, are completely convinced that there is a need for even stricter exclusion of the "wrong people" from society and even harsher punishment for their wrong behavior and beliefs.

In this regard, it seems difficult to be more precise than Agnese Irbe, Doctor of Philology, was in her remarks at the launch of the book "How to be a Conservative" in Latvian by the great British philosopher Roger Scruton. Here are excerpts from her speech. "Here in Latvia, and I haven't even fully grasped it, we have basically introduced an apartheid regime and a caste system, which I see every day in Pārdaugava when I drive past the little Maxima store that doesn't ask for those certificates. People who cannot shop anywhere else are crowding in there.

It is absolutely amazing that since independence, since the 1990s, we have lived with the supposedly strong post-war ideals that the Lipke Memorial embodies - no to sorting people; no to discrimination. All the huge discourse that millions (many trillions worldwide - B.L.) have been spent on various NGOs and other activities to maintain, turns out to mean nothing now, in the current state of emergency. At all. For most people, those words mean nothing at all. What is written in the Constitution does not really mean anything to them either.

One can only admire the profound irrationality that comes through when talking to even close friends. They really think that it is right that the unvaccinated should not be allowed to work. Even remotely and even as a street sweeper. It is difficult for me to comment on this because I am at that stage of shock where I do not yet fully believe what is happening. You have to look at intellectual sources, at history, has this ever happened before? Has there ever been such an attitude in Latvia towards basic documents? The inability to talk rationally about these issues; the inability to organize to say no; the fragmentation and weakness of the legal community.

My biggest concern is the weakness of the moral atmosphere. It turns out that people have been talking in such empty rhetoric all these years. All the time you keep saying, 'We must not discriminate'; you keep saying, 'Everyone is equal, fundamental human rights must not be violated', but when it comes to the situation [where these high ideals have to be put into practice], it turns out that it is just a rhetorical trick. They are empty words. It's like complimenting someone you don't really like.

There is a whole cultural layer built up, but none of the people there can stand up and say: you know, we ourselves agreed ten years ago (actually less than a year ago - B.L.) that you shouldn't do this. What is being done now. Also, with Members of Saeima and municipalities who have been suspended. This should not be done. It is against the Constitution, against our principles. We have to look at history, how it has been. Afterwards, the public wakes up and says, sorry, we made a mistake, it was a bad dream, some demons must have been possessing us.

My biggest worry is that a large number of people, including from the liberal layer, are literally advocating brutal discrimination against people in today's Latvia. They know very well that they are contradicting themselves and what they have lived with for 30 years, but when all this is over, and it will be over at some point, they will not return to this previous discourse, and the rhetoric will have changed. That can be extremely, extremely dangerous.

I stress once again that, since the shocking experience of the Second World War, with the descent of democratic, constitutional, largely liberal countries into despotism and totalitarianism, we have maintained the idea that whatever happens, we can't allow that; we are not going in that direction, whatever the ideals - Aristotelian, Kantian, human rights courts, etc. We put up a thick mattress so that the next time we fall, it will be there at the bottom. If now, because of this pandemic, because of these unpleasant things, that mattress has been removed and is no longer there, then we will fall on the hard boards. It is frightening to think about what will happen in ten years' time. What will replace it?"

For my part, I would add that we should not think that in totalitarianism all the "good" people join underground circles and think only about how to stick it to the regime. While the furnaces were running at full blast in Auschwitz, in Berlin the refined society went to the opera, and there were Kant readings in Königsberg in which intellectuals discussed Kant's categorical imperative. So let us not forget the good old saying: the road to hell is paved with good intentions. It is a pity that Agnese Irbe's quiet voice is drowned out by the massive noise of the Kariņš/Pavļuts regime's fan choir.

Congratulations, Mr Pavļuts, you did it! In a year you have built a totalitarian, apartheid regime which the "refined" public accepts, snobbishly wrinkling their noses at the "untermenschen" who crowd outside the shops where they are allowed to shop. Yes, you may never have said the words that appear in the title of this article, but those are the words that describe what you have done this year. Even if you did not physically say them, your actions did.