Military forces are increasing across the whole of Eastern Europe

No matter how much the NATO countries tried to formulate and send various uncomfortable signals to the Kremlin over the past year, scaring it with unimaginably harsh economic sanctions and a ban on Russian officials shopping in boutiques in Nice, the Kremlin pretends not to notice the uncomfortable signals, sending no less uncomfortable signals in return, and it is not about giving up Riga sprats, but about taking "military-technical measures" regarding the situation in Ukraine and NATO's entire eastern border.
03.01.2022. Imants Vīksne 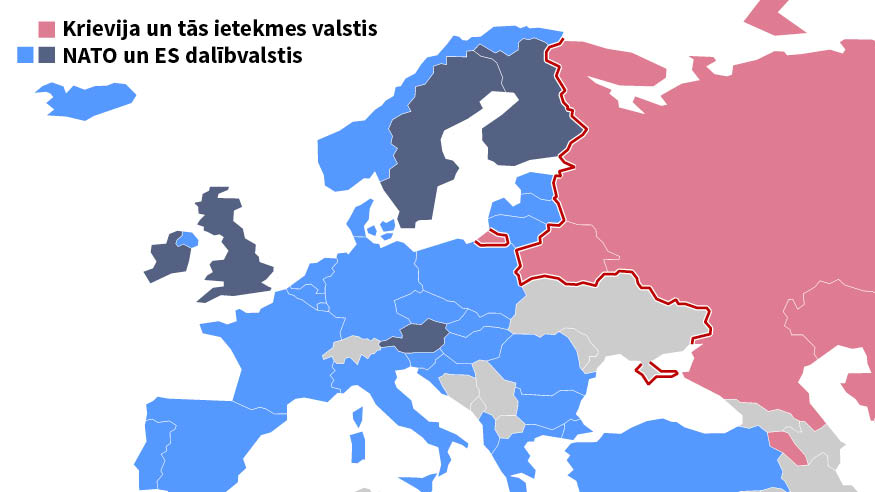 Tensions between NATO and Russia have been rising since the spring. Politicians, military analysts and also readers of Neatkarīgā are following it closely. The publication "Latvian border is getting crowded with military forces" was one of the most read throughout the year. When a strategic bomber takes off from a military airfield anywhere in the world, the command centers of all the world's armies go on high alert. And in May, the allies made several cruises of NATO airspace in B-52s. This was in commemoration of US veterans Memorial Day. They dropped some aerial combat bombs (without nuclear warheads, of course) on the Ādaži airfield for demonstration and training purposes, "demonstrating the capability and reliability of NATO and US Air Forces in Europe and Africa."

Much was covered up with Zapad 2021

The Russian reaction to the Memorial Day commemorations was lightning-fast.

The Western region immediately increased the intensity of combat tasks, patrolling at sea and in the skies, and created 20 new army formations with 2,000 pieces of military equipment under arms. By an ideal coincidence, or rather by far-reaching intentions, Russia was able to cover this military expansion with the annual Zapad 2021 exercises held jointly with Belarus, and after the Russian troops entered the friendly territory, there are still no reports that friendly territory has been abandoned. However, it has been reported that new joint military maneuvers will take place again early next year. And this creates danger on two flanks at once. Firstly, the hybrid attack by Lukashenko's migrant recruits on the three Baltic States and Poland continues. A major armed incident on the border or an escalation of the conflict with Minsk and Russia will rush to the rescue to stabilize the situation. Whatever it takes. Secondly, the situation on the Ukrainian border, where Russia has amassed a large number of armored vehicles, is becoming increasingly dangerous.

Bite off more or swallow it whole

No, Ukraine is not a NATO country. No, NATO Article 5 - one for all and all for one - is not being triggered, even if Ukraine is begging for it. And formally, the member states will have no grounds to trigger even Article 4: "The Parties will consult together whenever, in the opinion of any of them, the territorial integrity, political independence or security of any of the Parties is threatened." But Ukraine is a NATO buffer state, a piece of which Russia has already bitten off, with the NATO bloc just helplessly shrugging in the background. And now it looks like it is about to bite off more. Or even swallow it whole. Communication at the diplomatic level is now almost non-existent, with each side coming out every now and then with statements about the other's fault, and military experts and dilettantes coming out with statements about the possibility of a major war. The public in general and the readers of Neatkarīgā are actively following these warnings because, as the ancient Romans said, "Si vis pacem, para bellum" - if you want peace, prepare for war. It is therefore not surprising that among the articles devoted to military issues, Neatkarīgā's publication "What to do in case of war," with practical advice and tips for the eleventh hour, attracted a lot of interest in the autumn. What to do, where to go, how to endure at least 72 hours on your own. How to protect your family and your country.

The border is a non-negotiable value

At the moment, relations with Russia are only escalating. As a NATO border state, we are very directly affected by this potential threat, but this fact is not adequately appreciated. The absence of a fence on Latvia's eastern border is proof of this. Talk of the need for one began in 2013. Almost ten years ago. But, as Neatkarīgā just had the opportunity to see for itself, "Exclusive from the eastern border: it's worse than it looks." The border is full of holes like a sieve. And migrants, terrorists and other little green men are not coming through the official checkpoints. Our leaders gave rousing New Year speeches about self-reliance, the successful fight against the pandemic and the opportunities of the Green Deal, and tried to cheer up the public. Meanwhile, German Chancellor Olaf Scholz concluded his New Year's address by focusing on the threat from Russia. If Putin invades Ukraine, there will be massive consequences. The inviolability of borders is a non-negotiable value. This is the Germans' New Year message to the Russians.

They are talking about our redistribution

And along with the rest of Eastern Europe, we - Latvia - are that inviolable border. At the end of the year, Russian President Vladimir Putin demanded guarantees from NATO that the bloc would not expand further eastwards, primarily in Ukraine. And they also demanded restrictions on the deployment of NATO weapons in the border countries, including here. The US and Russian Presidents have already called each other twice, which is uncannily reminiscent of the diplomatic developments at the end of the Second World War. Once again, it is a question of the distribution of spheres of influence, and once again Latvia is among the countries whose unofficial affiliation is being discussed by the world powers. As President Egils Levits recently admitted on state radio: "The situation has escalated. Basically, for the first time since the Second World War, the demand to reintroduce spheres of influence in Europe is being made in a more or less veiled way. We know how that ended in 1939."