JKP reaction to Bild allegations: a cowardly attack on a messenger

Instead of explaining to the public the reasons why the largest and most influential European print magazine Bild is spreading serious insults against the Latvian state and accusations against influential Latvian politicians, the New Conservative Party (Jaunā konservatīvā partija, JKP) has announced that it will turn to the police against Neatkarīgā Rīta Avīze, which published a story about the German publication. A cowardly act – to shoot the messenger. They hoped to sweep this scandal under the rug, and they do not care about Latvia's tarnished reputation - not only Jurašs and Bordāns, but also the coalition as a whole.
04.01.2022. Imants Vīksne 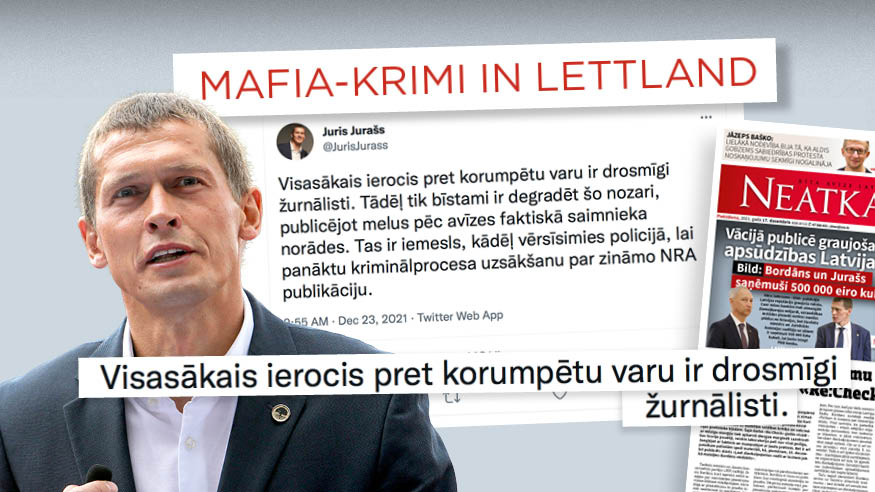 @JurisJurass: "The best weapon against a corrupt government is courageous journalists. That is why it is so dangerous to degrade this industry by publishing lies at the behest of the actual owner of the newspaper. This is why we will be going to the police to have criminal proceedings brought against the well-known NRA publication." ©Neatkarīgā

JKP announced that it will turn to the police in its year-end political roundup and also sent it to our editors. (Rather than an argumented request to retract the publication.) It should be made clear immediately that as soon as Neatkarīgā received the link to the Bild publication, it immediately contacted all the people and institutions allegedly involved in the story. There were many of them, because the spectrum of insults published by Germans is very wide. The publication "Mafia-Krimi in Lettland Ex-BND-Chef und Ex-Nato-Boss Opfer eines irren 'Bankraubes'" reports that North Korean billions are being laundered in Latvia, that our supervisory authorities are covering up a flood of dirty money from Russia, that the Minister of Justice and the Head of the Legal Affairs Committee received a €500,000 bribe to allow the PNB bank to be robbed and that the Head of our Government is covering up corruption at the highest level. No names were mentioned, but the positions mentioned are sufficient to identify the specific individuals in question in relation to the mentioned time period. In any country, there is only one Prime Minister, one Minister for Justice and only one head of a specific parliamentary committee at any one time. One Kariņš, one Bordāns and one Jurašs.

In contrast, the main characters mentioned in the article - the Latvian Minister of Justice and the head of the Legal Affairs Committee, who Bild claims received a €500,000 bribe from PNB Bank - remained silent, while the Prime Minister's Office gave a formal response that did not answer a single question. So that is what Neatkarīgā wrote: "Latvia's reputation will not be defended against the slander published by Bild." The only politician who not only read these publications, but also reacted to them, is Māris Možvillo, a Member of the Saeima. He addressed the Defense, Internal Affairs and Corruption Prevention Committee with a request to assess whether the information mentioned in the publication is true and whether it poses a risk to the reputation of the mentioned officials and the image of the state. However, the head of the Committee, Juris Rancāns, has not responded to the request and is no longer in contact with Neatkarīgā, although he has always been very quick to respond in the past. He has probably been forbidden to do so by the party leadership, because the leadership has decided to take action in the police against the publication, not against Bild, as one might logically think, but against Neatkarīgā Rīta Avīze, which published an article about the Bild publication.

A cowardly and deplorable act

Here is statement number 16 in the JKP's political news roundup:

"16) Juris Jurašs and Jānis Bordāns will turn to the police against the NRA for spreading fake news.

J. Jurašs: 'The best weapon against a corrupt government is courageous journalists. That is why it is so dangerous to degrade this industry by publishing lies at the behest of the actual owner of the newspaper. This is why we will be going to the police to have criminal proceedings brought against the well-known NRA publication.' It is important to hold those guilty of knowingly spreading fake news to account in court!"

And this statement is followed by links to social networks where the message with roughly the same content has been republished. Jurašs and Bordāns will turn to the police. So brave journalists speaking out against a corrupt government is fine, but if they go after the JKP, then the police should punish them. This is cowardly and deplorable behavior on the part of politicians. Especially considering that Neatkarīgā tried to reach out to these politicians through various channels - emails, phone calls, press services. It is also cowardly because they are now only concerned about themselves, not the reputation of the Latvian state. Bild is not "just some tabloid". It is the largest and most influential print publication in Europe, read by millions, and these millions of Europeans, including their leaders, have been told that Latvia is a country that steals, that launders the money of North Korean terrorists and Russian criminals. That it has done so for 30 years and is still doing it. But the government is not concerned, at least there has been no publicly known reaction. Only the JKP is worried, and then only on a local level, because it could hurt their ratings - so party leaders will go to the police to shut the mouth of a local publication. They will turn against the whistleblower. A cowardly and unworthy act that would have no place in honest politics.

"Every journalist has a duty to tell the truth. It is a fact that the most influential German newspaper Bild published an article accusing two of the most important JKP officials of corruption. That is the truth. I believe that a party that threatens to punish journalists or the media for telling the truth should certainly not be represented in the government of a democratic country. In my opinion, the first task of the leadership of the JKP, if it really wants to continue in Latvian politics, should be to find out whether there is even the slightest doubt about the involvement of two key leaders of the JKP in the illegal transactions surrounding PNB Bank. But instead of asking the Latvian security authorities to investigate whether a transfer of half a million euros has been made from PNB Bank in connection with the leaders of the JKP, threats are being made against a Latvian media outlet that only reported on the contents of the Bild publication."