Talks between Russian and US delegations on "security guarantees in Europe" started on Sunday evening and continued in Geneva throughout Monday. They will continue on Wednesday in Brussels in the framework of NATO-Russia and on Thursday in Vienna in the OSCE format.
11.01.2022. BLBens Latkovskis 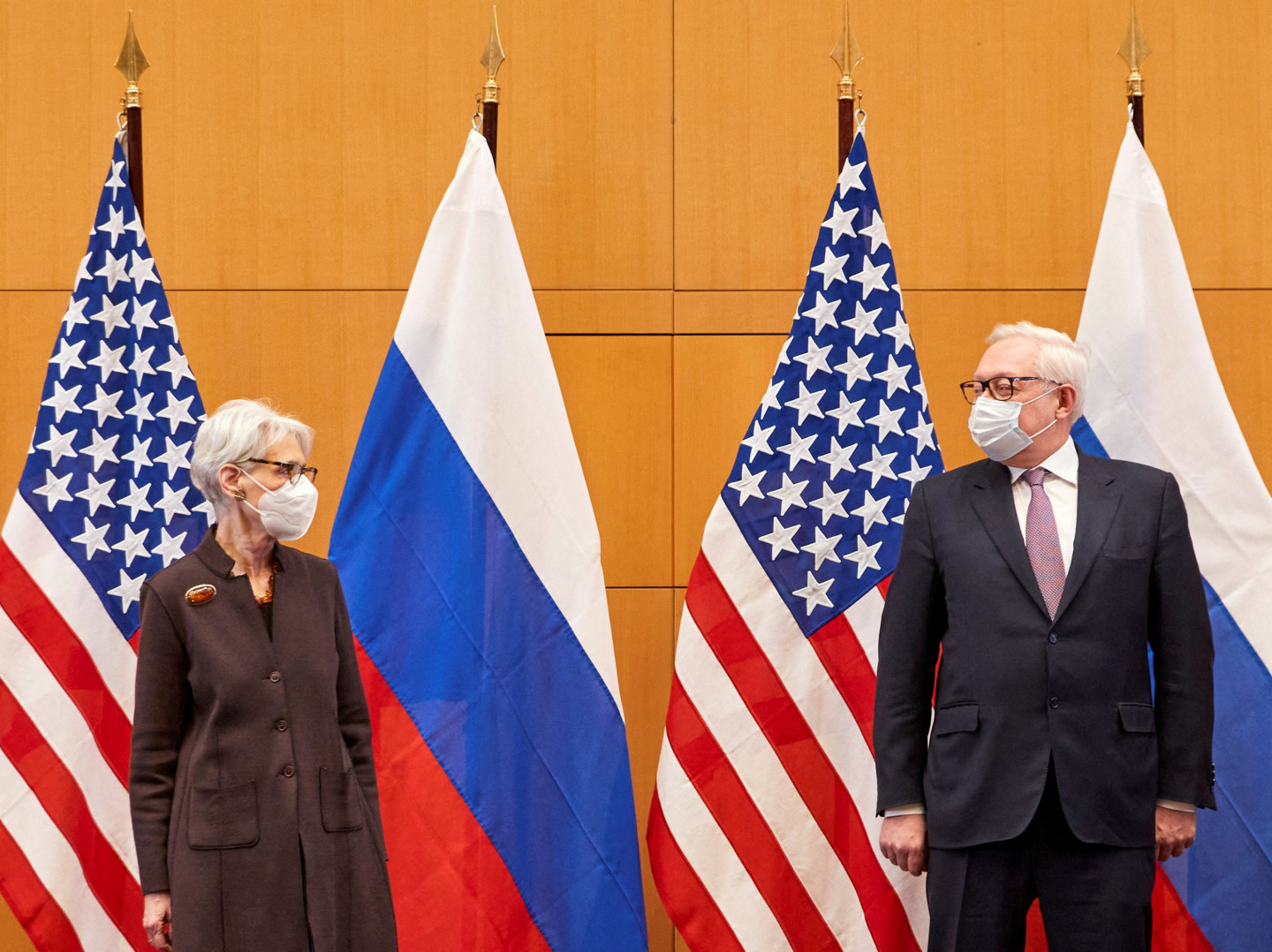 The Russian delegation, which includes both diplomatic and military officials, is led by Deputy Foreign Minister Sergei Ryabkov, who is known for his aggressive, undiplomatic statements, and there is no doubt that his behavior is not accidental. He is playing the role of the "bad cop" in Smolensk Square, against which Putin, with his soft, friendly voice, sounds like a true angel of peace.

The US delegation is led by Deputy Secretary of State Wendy Sherman, a 72-year-old veteran diplomat who, under Bill Clinton, negotiated with North Korea to halt its nuclear program. During Barack Obama's second presidency, she worked under then-Secretary of State John Kerry and led the negotiations on Iran's nuclear program. Although she is regarded as a tough and unwavering negotiator, it is difficult to call the results of the previous negotiations she led successful. The fact that Sherman was under Kerry does not boost her either, since it is Kerry, who is in charge of climate in the current administration of President Joe Biden, together with the President's National Security Adviser, Jake Sullivan, who are the biggest Kremlin "friends" in the Biden administration.

It is said that a bad peace is better than a good war. This is the common wisdom behind any negotiation, no matter about what and with whom. Negotiate even with the devil's grandmother, because it is better to sit at the negotiating table than in the trenches or underground bomb shelters. But there is a but. That's true if the purpose and subject of the negotiations are clear. Neither is clear in these negotiations.

One might say - how is it not clear? The aim of the negotiations is to prevent Russian aggression in Ukraine in the narrow sense and, in the broader sense, to ensure peace in Europe and throughout the world. The subject of the negotiations is Russia's proposals of December 17 for "peace guarantees" (above all, written guarantees not to extend NATO eastwards). Formally, one could even say, yes, everything is clear, but it is no coincidence that these Russian proposals are most often referred to as an ultimatum, because they are formulated in a rather undiplomatic manner, offensive to the countries concerned (since they are in effect proposing the division of the world into spheres of influence), and the statements made by the head of the delegation, Ryabkov, after December 17 ("Everything is handed to you on a plate. All you have to do is sign it. It can basically be done in a few days") were not the kind of statements that comes from a genuine desire to agree on something.

Also on Sunday, after the two-hour opening dinner, Ryabkov reiterated that the Russian side had come to Geneva with a clear position and "there is no possibility of backing down from our formulations". If it is said even before the talks that no backing down, not even by an inch, is possible, then there is every reason to suspect that there is no desire to agree on anything and that all these diplomatic moves are aimed at something else. What is it?

The term often used to describe Putin's foreign policy and his policy of blackmailing with military threats is bluff. The justification for this bluff is usually based on two things: Russia's economic and also military weakness in relation to the strength and power of NATO, and phrases about the close ties of the Russian elite with the West. They all have villas there, children living and studying, bank accounts, leisure facilities, shops, medical services and so on. They are not going to go to war against their own prosperity.

Both of these excuses are only partly reassuring. As regards the strength and power of Russia and the West, this superiority is nominally indisputable, but again there is a but. There is parity in the number of nuclear weapons, and the "Joint Statement of the Leaders of the Five Nuclear-Weapon States on Preventing Nuclear War and Avoiding Arms Races" of January 3 this year may at first sight appear to be a mere formality. But this document has an important symbolic meaning. It confirms once again that there are five leading nuclear powers - the US, Russia, China, Britain, and France - which together are responsible for the security of the world. In other words, he who has the atom bomb is lord and master. Whoever does not have them must stay on the sidelines.

When assessing the likelihood of a bluff, the price of human life in Russia and the West must also be taken into account. This price is incomparable. Nor should it be forgotten that the Russian people have been conditioned for ten years now to believe that war is good; war is just; war will give us the place in the world we deserve, and so on. That is to say, the Russian people have been prepared for war for a long time and with a purpose, while in the West the opposite is happening: people are being made to think that there are all sorts of huge problems, from transgenderism, to critical race theory, to Greta's "stolen childhood", but war is not on that list of problems. That is left to Hollywood and computer games. Virtual and irrelevant to reality.

As for the Russian political elite, which is closely linked to the West, their way of life and their properties, it is not guaranteed that Putin, who has acquired the power of an absolute monarch in Russia, would count particularly on the interests of his non-first-circle boyars. What is more, he and his inner circle have also long been playing their favorite "computer game" - the geopolitics made in the Ostankino studio, in which a Eurasian war with Anglo-Saxony (the USA and the West in general) is being fought. In this virtual war, the Solovyov villas on the shores of Lake Como, the Shuvalov penthouses in London and New York, are an insignificant backdrop, irrelevant in the decisive final battle - who will overcome who?

But let's return to the Geneva talks. Before them, the US Secretary of State, Antony Blinken, in an official speech, spoke very harshly about who was to blame for the escalation of tensions. He pointed out that it was Russia that had brought troops into Ukraine, Moldova and Georgia; it was Russia that had caused several armed conflicts in Europe; it was Russia that had done everything to threaten Ukraine's sovereignty. Russia has done all this, not NATO, but it continues to spread the false narrative that it is Ukraine that is threatening it.

"That's like the fox saying it had to attack the henhouse because its occupants somehow pose a threat. We've seen this gas-lighting before." In an interview with ABC on Sunday, Blinken also admitted that he did not expect any specific results from the upcoming talks, but added that a diplomatic solution was still possible and desirable. However, this remark seemed more like a formality.

The West seems to be in a determined mood. Before New Year, on December 30, a statement signed by 25 senior diplomatic and military officials was published, strictly rejecting possible concessions to the Kremlin's ultimatums. Also on Monday, The Financial Times ran the headline "NATO stands ready for conflict in Europe, says alliance chief". By the alliance chief is meant NATO Secretary-General Jens Stoltenberg. As many observers note, there has been a significant shift in attitudes towards the Putin regime in the Western political class (especially in the US) over the past year. While the prevailing idea used to be that Russia should somehow be talked to, negotiated with, even appeased, now the underlying emotion is different - now they have finally had enough. How much longer should we take this? We have to fight back.

Unfortunately, it has to be admitted that the world situation is becoming increasingly tense, and the events in Kazakhstan, especially the presence of a foreign military contingent, are not making the situation any brighter. However, we must hope for the best, and we can only repeat Blinken's words: a diplomatic solution is always possible. Even if one side does not want it. But it requires a great deal of inner resolve and conviction. Whether the West will be able to demonstrate this, we will see this week.