Egils Levits discredits the institution of the President of Latvia

Jānis Urbanovičs, the leader of the Harmony (Saskaņa) party, expressed the following opinion in Neatkarīgā on January 8: "I have always shied away from criticizing the President of the Republic. Regardless of the personalities who hold the office, it is a symbol of Latvia, like the flag or the anthem. But we are living in such difficult times that we need not only a symbol but also a leader.
11.01.2022. MKMāris Krautmanis 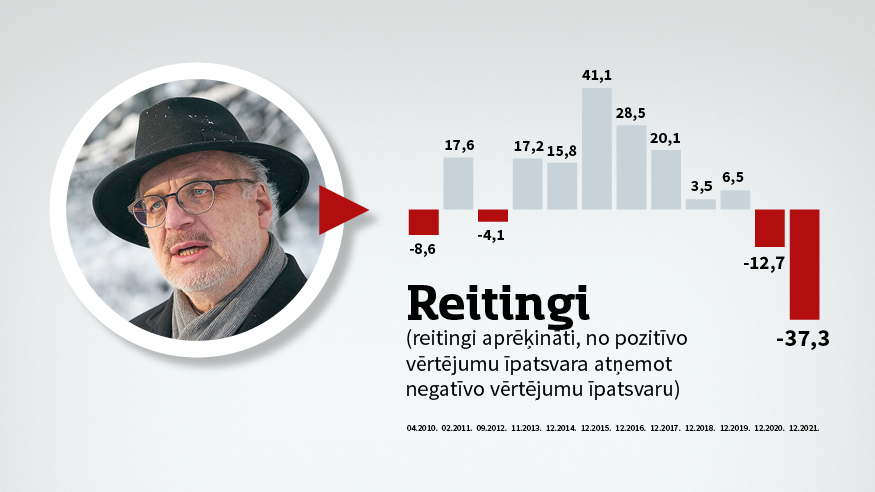 As sociological surveys have shown, citizens and the President disagree on much more fundamental matters than how the festivities should take place. And that is very bad in our democratic system, where it is the President who should be the balancer when the ruling coalition begins to forget its responsibilities towards its citizens. But in Levits, it is not the people but the ruling coalition that has gained a lawyer fully loyal to itself."

Harmony is in the opposition in the Saeima, and Urbanovičs' statement could be seen as political rhetoric. But some things can be measured (subject to statistical error, of course).

At the end of each year, Neatkarīgā commissions a study from the research centre SKDS entitled "Trust in State and Public Institutions and Evaluation of the Performance of Politicians and Public Officials".

This study revealed that public trust in the institution of the President of the Republic of Latvia is minus 37.3. Last year the figure was minus 12.7. Read the article here.

Even last year, when political experts saw 12.7, they were horrified that trust in the institution of the President was so low. But what to say now that it is sinking like a stone? Is this the bright star that was supposed to shine on even the darkest and most lawless corners of our country? How could this have happened?

Egils Levits, after all, came with a very large public trust credit. Although in our country the President is elected by the Saeima, initially the people also trusted and had high hopes for him.

It is true that the theme of the last two years has been gloomy: Latvia is suffering from a pandemic and its related crises in various areas. However, in such circumstances, it is the President of the Republic who could be expected to provide encouragement, reassurance and bring together the various groups of a divided society. He would be expected to stand up for the people when they are being wronged by the authorities. He would be expected to stand up for the law and the Constitution. After all, even before he became President, he himself took part in the drafting of the Preamble to the Constitution.

The public has desires, but the institution of the President of the Republic satisfies very few of them.

At that time, the party leaders obeyed the President and the law was redrafted.

However, no constitutional crisis has arisen from the fact that the structure of the Ministry of Justice did not comply with the judgment of the Constitutional Court adopted on November 7, 2019, in the case "On Compliance of Article 50.4 of the Sentence Execution Code of Latvia with Article 91 of the Constitution of the Republic of Latvia". The last date for compliance with the conditions of this judgment was May 1 last year. This case was probably not even noticed by the President.

And in November, the Saeima did not notice the President's request to eliminate contradictions in the law regarding the non-fulfilment of the promised salary increase for healthcare workers.

But if the President does not notice, or he is not noticed, then he can hardly have much credibility in society.

Egils Levits regularly has something interesting to say, like how "those who die won't get to celebrate Christmas".

"Half of our population is vaccinated, the other half is not vaccinated. Those who are vaccinated are much more protected. But those who have not been vaccinated are now being taken head-on by Covid," the President said in November this year.

His remarks would not be the most ratings-destroying - they tend to provoke laughter, they generate humor, memes on the internet. Creating new words is not a bad thing either. But there was, for example, the case in July when Egils Levits said that if someone threatens another person, that is where his human rights end. Well, the President is someone who probably shouldn't say that, and it hardly inspired and urged the unvaccinated to run and get vaccinated. Was it not rather the other way round? Somehow it sounded out of place and out of time.

Last May, on the 31st anniversary of the restoration of independence of the Republic of Latvia, the highest Latvian state awards were conferred on people who have rendered outstanding service to the Latvian state and people and whose selfless work has strengthened our country's democracy, rule of law, security and prosperity, and invested in health care, education and culture.

The Orders of the Three Stars were also awarded to 12 journalists, most of whom were ideological adepts and propagandists of the Chancellor of the Chapter of Orders, former Editor-in-Chief of Diena Sarmīte Ēlerte. With this, Egils Levits and Sarmīte Ēlerte devalued the Order of the Three Stars to a souvenir - to a coffee mug with a company logo that superiors hand out to their corporate subordinates.

When there are disputes between Prime Minister Krišjānis Kariņš and his partners in government, Egils Levits sides with Kariņš and makes almost blatant threats against the "wrong" ministers. Demonstratively.

So, one can consider that the institution of the President of Latvia is working as a lawyer - if not for the whole ruling coalition, then for the most ruling part of the ruling coalition. Egils Levits ends up as a 101st member of the Saeima, with the difference that the people did not vote for him.

The result of the sum of various statements, actions or inactions is minus 37.3 - that's how far Egils Levits has discredited the institution of the President of the Republic!