Who can tell whether President Egils Levits and Prime Minister Krišjānis Kariņš are wearing black cloth masks or black respirators? The visual differences are minor

Yesterday, on January 12, 2022, President of Latvia Egils Levits met with Prime Minister Krišjānis Kariņš. The meeting is captured in the photos. Except that both President Egils Levits and Prime Minister Krišjānis Kariņš, even when posing for photographers, did not wear the white FFP2 respirators sold in pharmacies, but used "black masks".
13.01.2022. MKMāris Krautmanis 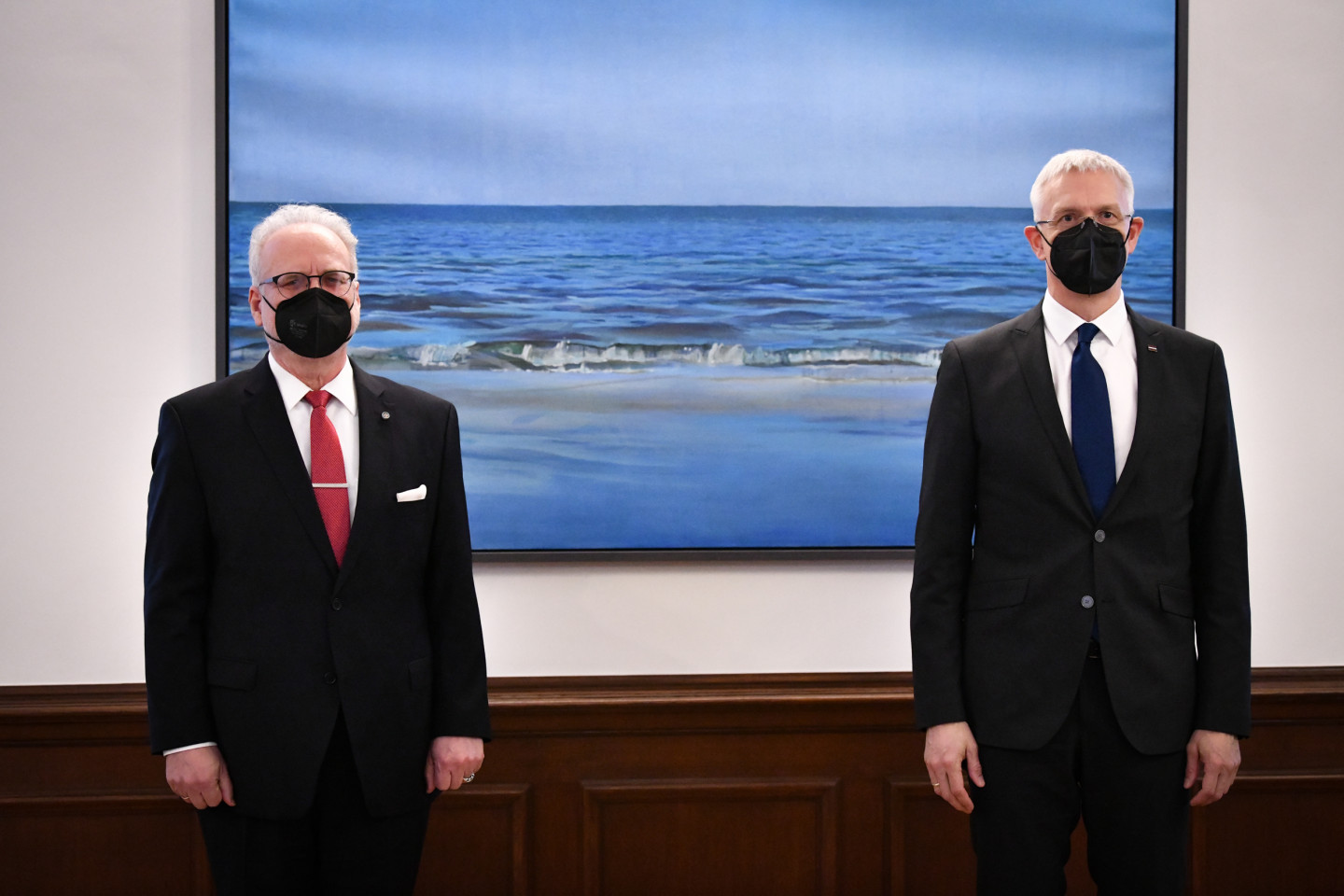 However, the day before, at a government meeting on January 11, it was declared that the wearing of cloth masks in green and red zones would be banned in two weeks' time. The new strain of the virus, omicron, is so ungodly contagious that, according to the Ministry of Health's suggestion, it can only be prevented by wider use of medical masks and FFP2 respirators combined with more use of self-tests. The very next day, the President of Latvia Egils Levits, together with the Prime Minister Krišjānis Kariņš, posed for photographers wearing masks that look like cloth masks and without special training, it is impossible to tell whether they are respirators or not. Making respirators mandatory first requires training those who control whether people are using them, including the many rather robust security guards, how to visually distinguish between black cloths and the all-powerful and life-saving respirators.

A respirator is supposed to be a good thing and probably protects people better against viruses, because it has long been clear that a cloth mask does not protect against anything. As Dr Pēteris Apinis said back in September 2020, "a cloth mask is as good against Covid as a wire fence against flies".

The "soon" is long gone, and now a new "soon" deadline has been set again - two weeks.

However, there is the small detail that there are no respirators. The Director of the State Chancellery, Jānis Citskovskis, informed the government that there are currently no stocks of FFP2 respirators in Latvia and no active contracts for their purchase. Therefore, a tender for the purchase of FFP2 respirators would have to be launched, and this process, together with the delivery itself, would take about one and a half months.

Whatever the case, the government's discussions continued in the direction of supplying respirators to the poor.

I am a law-abiding and diligent citizen. I went to the pharmacy for them some time in the autumn. They told me that they did not have any, but that they might have some in Drogas. There were none in Drogas, but I found them in one other pharmacy. Oh, joy - I got the coveted FFP2! Let's put it this way - the respirator bands grabbed my ears and pulled them down hard. My ears felt like they were sticking out.

I don't know how big the heads of Krišjānis Kariņš (JV), Daniels Pavļuts (AP/P) are and whether there is something inside them, but I hope they don't buy masks that can rip their ears off. What will it look like if high-ranking officials walk around without ears?

Maybe those respirators are for children? Maybe the problem is that they are made in China, where people are slightly shorter and therefore the distance of the ears from the nose is smaller?

The Prime Minister and other officials should start thinking early on whether respirators will even be usable. There was a row about respirators once, but it was not about the length of the elastic bands, but about the fact that they let in more viruses than they should have.

There were requests from Members of Saeima that were investigated for about a year. The most active enquirer was, and still is, MP Ivars Zariņš (Harmony, Saskaņa). It was found that the responsible officials could not justify the size of the transaction, the choice of supplier, the price or the documents accompanying the transaction to prove the quality of the goods supplied. The respirators were found to be defective.

Officials hesitated to react to the deal and waited for the dividends from the deal to be paid to the advertising agency SIA Title. And why was the supply of respirators entrusted to an advertising agency? Might as well ask the Prison Administration to organize kindergartens and a specialist in artificial insemination of cows to perform heart surgery. The supply of a million respirators was given to a company whose turnover was several times smaller in the past. But now it is becoming commonplace in Latvia: in a nationwide testing procurement, one of the winning firms was founded last autumn and had a turnover of zero or close to it.

If the government is already talking about the need for FFP2 respirators, it means that their use will not only be recommended, but also enforced as compulsory. There may already be an agreement on who will supply them. Because we need them fast.

After all, there is the wonderful fact that Latvia has a state of emergency in which the public authorities are allowed to act more quickly and brutally - they can organize not a tender, but a price survey, surveying the people close to the parties.

If Covid will mutate into new and increasingly contagious delta, omicron, deltacron or leprecon variants, then it will probably also be necessary to use increasingly advanced respirators for protection - FFP2, FFP3, FFP4, etc. We may not know yet, but maybe in time, everyone will be walking around in rubber coats, with aluminum pots on their heads and FFP555 respirators.