Every year, Neatkarīgā, in cooperation with the research centre SKDS, measures the level of trust of Latvian citizens in various institutions and politicians - simply put, their popularity. And in a steady trend, the National Armed Forces and, along with them, the political leader of the defense sector, Artis Pabriks, are increasingly trusted by the public. He has become the most popular government minister.
17.01.2022. Imants Vīksne 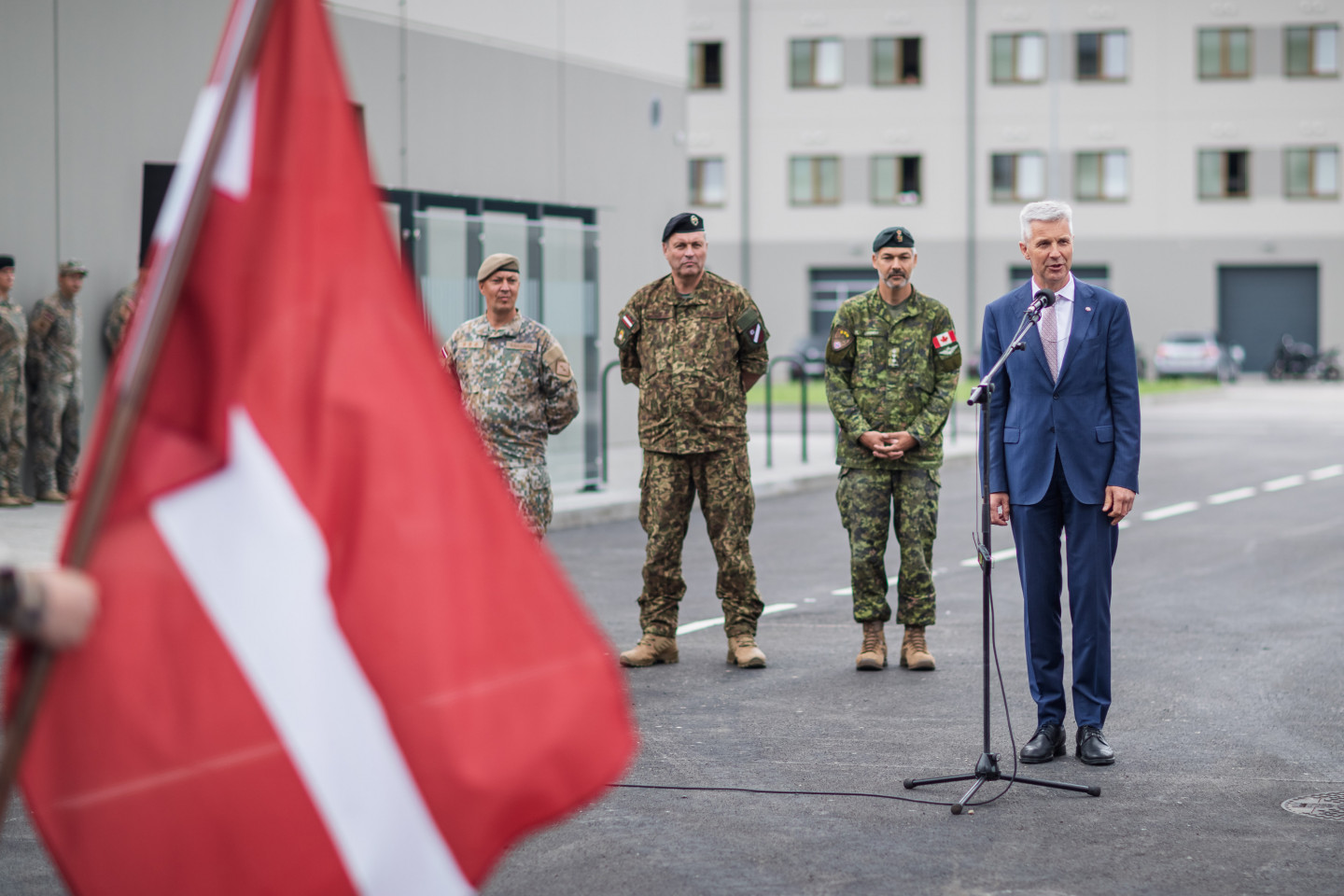 In assessing Artis Pabriks' rating, it is important to stress that he entered the sector after Raimonds Bergmanis, the most acceptable politician to the Russian public, and the army, although generally among the most popular institutions in the country, experienced a certain drop in its rating. But now, thanks to greater public support among both Latvian and Russian audiences, both the army and Minister Pabriks are more popular.

From heavy minuses to solid pluses 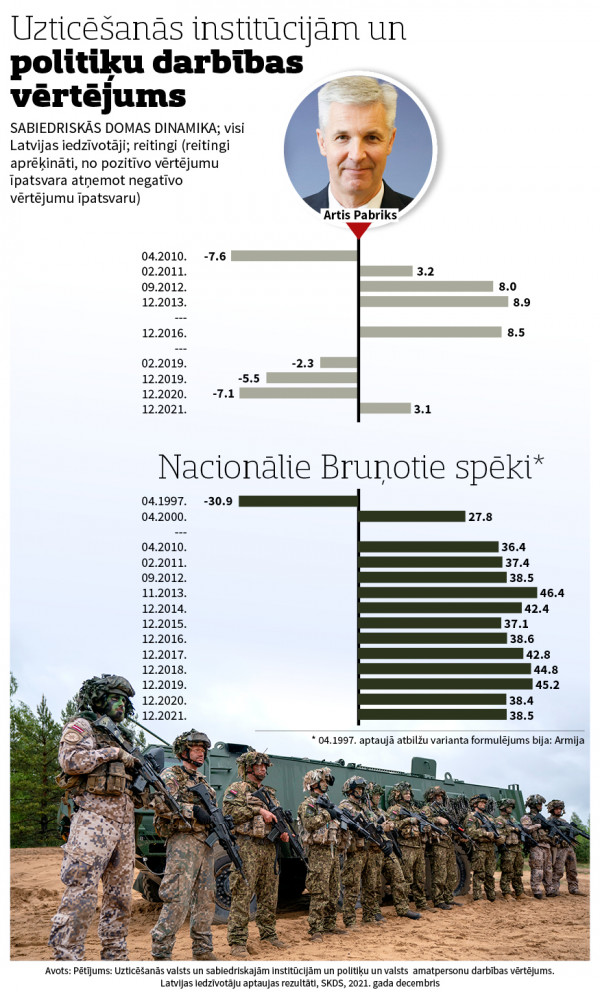 In recent years, the National Armed Forces have traditionally ranked second in the poll after educational institutions, which currently have a rating of 51.5. The Army scores 38.5. The rating is calculated by subtracting the proportion of negative ratings from the proportion of positive ratings and discarding those respondents who do not have an opinion or do not know the subject of the question. 63% of the population trust the army, 24.5% do not trust it and 12.5% have no opinion. Looking at the dynamics by year, the absolute low point for the popularity of the army was 1997, when it was viewed negatively by an overwhelming majority. The rating was minus 30.9. With a crumbling Soviet legacy on its shoulders. But with the compass set in the direction of NATO, the situation began to improve. By 2000, the army was well above average in popularity, and with a few dips, it remained so. One of these dips was due to the arrival of Minister Pabriks.

Pabriks - the most popular minister

The Army's rating fell from 45.2 in 2019 to 38.4 in 2020. This was still an excellent score compared to other institutions. The minister's own rating also continued to fall until the beginning of last year - from minus 2.3 points in the first year of this government to minus 7.1 points in 2020. But last year, Artis Pabriks suddenly became very popular. In the December 2022 ranking, he has 3.1 points, making him the most popular minister in the Krišjānis Kariņš government. Even ahead of the Minister of Culture, who is highly valued in the cultural community for his very position. By contrast, the Prime Minister himself, despite his huge work and enormous responsibility in shepherding the fragmented coalition, is laying at the bottom of the popularity rankings with minus 41.9 points. Only the Minister of Health and the President of the Republic are even less trusted by the public. But why has Artis Pabriks managed to make it into the top ten most positively rated politicians? Moreover, he has received the most positive evaluations among the Latvian audience. 47.5% of Latvian respondents rate his performance positively, and the number of positive responses is also significantly higher among the Russian public. The yearly increase was from 15.3% to 23.8%.

For national interests against the background of Golubeva

The Minister himself explains his popularity to Neatkarīgā by his unwavering fight for the national interest over personal ambitions. He also invokes the development of the military industry and working in the face of a pandemic. The Minister's comments can be found below, but Neatkarīgā has a different theory regarding such success.

In the second half of 2021, tensions between NATO and Russia began to run high. There is a new threat of a massive invasion of Ukraine, which means that Latvia's defense sector and capabilities are also under increased public scrutiny. And 2021 is also a significant year with Belarus' hybrid operation of migrants. Dozens of criminals cross Latvia's borders every day. The leadership of this crisis has been, by choice, given from the very beginning to the newly appointed Minister Marija Golubeva, a staunch pro-migration supporter in her previous life, without the slightest experience in power structures, and in addition a defender of the political interests of the LGBT community. It is no wonder that even among the Russian public, Marija Golubeva has a negative rating. She makes the Defense Minister look much better, even though they are formally political peers, elected from the same list and pursuing the same political agenda. Pabriks gives his colleague fatherly advice, sends the army to help the border guard and the hospitals, and also behaves in a much more appropriate manner in public than the Interior Minister. Sharp and aggressive - as befits a war minister.

All in all, he has an almost inexhaustible resource of positive publicity, at least in circumstances where there is a lot of war to talk about, but none to fight yet.

"As a Minister, popularity is not an end in itself. I attribute this rating to the fact that I have always clearly defined and fought for national interests. These interests stand above any personal ambitions, even though they have often been unpopular among my colleagues. My aim, and that of the industry as a whole, has been to deliver what is planned as quickly and accurately as possible - and in most cases, it has been achieved. I think that the public appreciates the successful procurement of Patria, which will enable the production of armored vehicles in Latvia, the development of the military industry and the support of local entrepreneurs, as well as the efforts to find sensible and economic solutions to the challenges posed by the Covid-19 crisis."