Latvians don't know who rules over them

The people of Latvia make no secret of how many of them have no idea who are the people who rule the country, including the ones who treat public money as their own.
27.01.2022. Arnis Kluinis 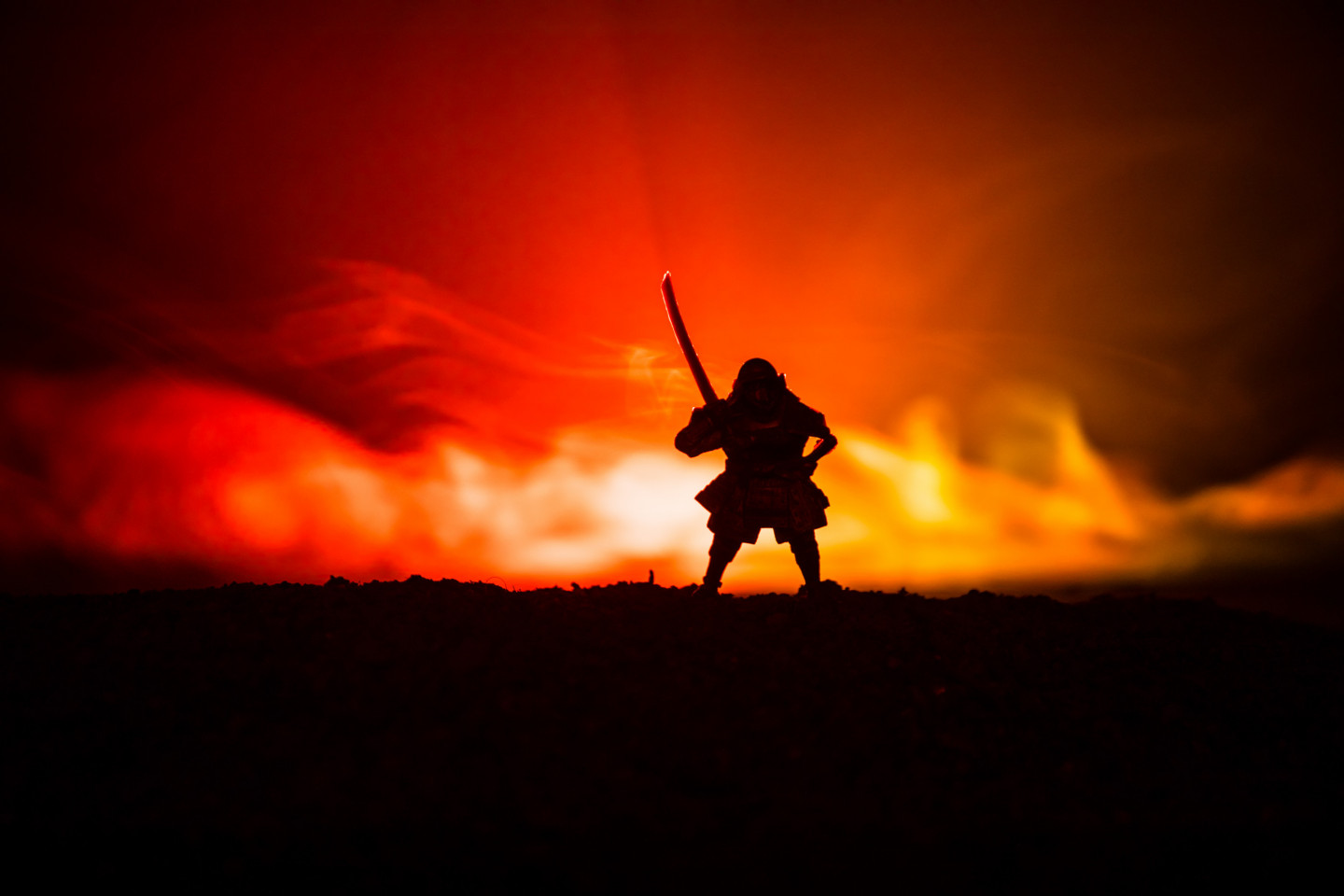 This time, let's look at how often surveys conducted by the SKDS Centre for Market and Public Opinion Research on people's attitudes towards the country's top officials record the answer that the respondents "have not heard of such a person". So, they have not heard of such persons, each of whom is mentioned in the media several times a day and whose decisions reach the respondents as people who depend on these decisions, whether as employees in private companies, as buyers and sellers, as road users, as patients, students, or tourists. It turns out that a third of the Latvian population has not heard anything at all about most of the current members of the Krišjānis Kariņš government.

SKDS Director Arnis Kaktiņš points out that the proportion of people who do not know the politicians in question is in line with the number of people who openly say they do not know anything about politics because they are not interested. People are divided into three groups, roughly equal in numbers, when it comes to politics. A third of respondents consider themselves interested and knowledgeable about parties and personalities that deserve or do not deserve praise and votes in elections. Another third pay attention to politics and politicians according to the electoral calendar and occasionally when the country is shaken by a particularly loud scandal or politicians' decisions affect them very directly. The remaining third have managed to ignore politics no matter what.

The rulers of the shadow state

Both thirds of respondents who are not interested in politics have combined to give the highest rating of unrecognizability to the Minister of Environmental Protection and Regional Development in the government of Krišjānis Kariņš, Artūrs Toms Plešs. The latest SKDS poll on attitudes towards politicians was conducted in December last year, when A. T. Plešs had been in the minister's chair for exactly one year. In that time, his presence in the government had been noticed by less than half of the 1000 people surveyed, representing the entire adult population of Latvia. The answer "have not heard of him" was chosen by 51% of the respondents. 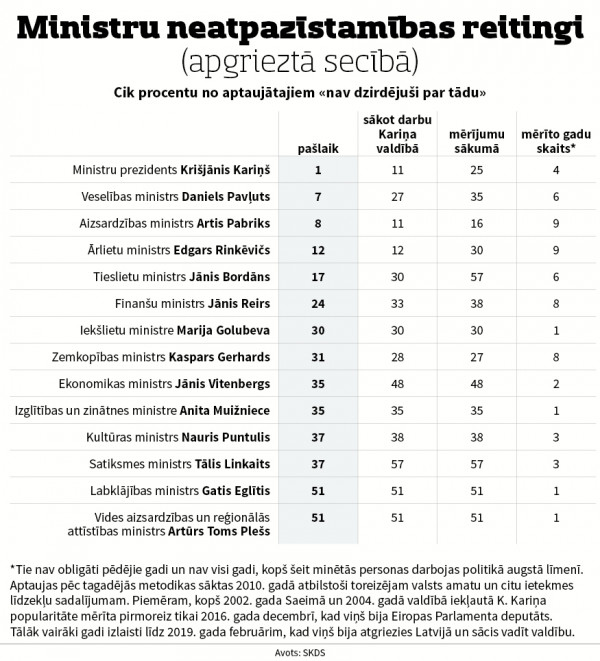 Ministers' unrecognisability ratings (in reverse order), percentage of respondents who have "not heard of them". Columns: currently, when started working in the Kariņš government, as measured at the beginning of the measurement, the number of years measured (these are not necessarily the most recent years and not all the years that the persons mentioned here have been in politics at a high level. The surveys started in 2010 according to the current methodology, in line with the distribution of public positions and other means of influence at that time. For example, the popularity of K. Kariņš, who has been in the Saeima since 2002 and in government since 2004, was measured for the first time only in December 2016, when he was a Member of the European Parliament. Then several years were skipped until February 2019, when he returned to Latvia and started leading the government) / Neatkarīgā

There are three reasons for the ignorance of the majority of the population about A. T. Plešs. Firstly, environmental protection is not a topical issue for the population. Accordingly, the ministry created for environmental protection does nothing more than translate environmental directives sent from Brussels into Latvian and work out how Latvia can fail to comply with them in order not to offend the interests of local party sponsors and numerically visible groups of citizens. Secondly, A. T. Plešs personifies the relaxation that took over not only the ministry but the whole country after decade-long fights over the administrative-territorial reform, which was quickly carried out and for which Juris Pūce, a minister of the Krišjānis Kariņš government, was sent for a well-deserved rest - retirement to the Saeima. Thirdly, the real duty of the ministry is to distribute into the right pockets the money that the state writes off for digitization projects that would be better for people not to know anything about.

Second place in the unrecognizability ranking goes to Minister of Welfare Gatis Eglītis, with an identical 51% unrecognizability rate, but it took a twice as short amount of time to earn it - since June 3 last year. Despite the fact that people are interested in pensions and benefits, most of which are channeled through the Ministry of Welfare, G. Eglītis has managed to stay in the shadows. Indeed, the attractive costumes (or body parts left bare) of his predecessor Ramona Petraviča cast a long shadow. The respondents might confuse the minister's moves with his party colleague Krišjānis Feldmans, with whom he is so similar that it is as if they were brothers, even twins.

Ordinary politicians and slightly deviant ones

The 51% non-recognition rate is an extreme figure, above the natural third of people who declare their disinterest in politics. This is roughly the number of people who are unaware of the existence of the Minister of the Interior Marija Golubeva (30%) and the Minister of Education and Science Anita Muižniece (35%), who joined the cabinet at the same time as G. Eglītis. They also include the Minister of Economy, Jānis Vitenbergs (35%), who received his current ministerial mandate on June 3, but has held the same post since April 2, 2020, with his previous mandate. In the year and a half to December last year, he had managed to reduce his unrecognizability by 13 percentage points. The Minister of Culture Nauris Puntulis and the Minister of Transport Tālis Linkaits are in the same group, i.e., 37% do not know them, who have been in the Kariņš government since its establishment.

Quantitatively, the Minister of Agriculture, Kaspars Gerhards, is right up there with the 31% who don't know about him, but he deserves a separate discussion. Firstly, he is a minister whose recognition has not grown, but has somewhat diminished during his three years in the Kariņš government. Secondly, he has been a minister for ten times longer than the members of the Kariņš government listed above, with their relatively short tenure, which automatically ensures publicity. K. Gerhards started as Minister of Economy in 2007 and since then has rotated at ministerial level in such a way that people have given up trying to figure out who he is and what he does or does not do at any given time.

The shift from natural obscurity to recognition starts with Finance Minister Jānis Reirs, of whom 24% of respondents were unaware. J. Reirs acquired this deviation in the K. Kariņš government, as he had already received his first portfolio, that of Minister of Special Tasks for Electronic Government, in 2004 and subsequently carried the portfolios of Minister of Finance and Minister of Welfare with similar (un)recognizability indicators as K. Gerhards.

The Minister of Justice, Jānis Bordāns, has made a breakthrough in visibility. He had already been given the portfolio for the first time in 2012, a fact that went unnoticed by 57% of respondents. Last December, only 17% of respondents did not notice him.

Close to the 10% mark is Minister of Foreign Affairs Edgars Rinkēvičs, about whom 12% do not know anything. He has maintained this figure since December 2014until very recently, when his announcement on November 6 about his homosexual orientation was very fresh. This halved the proportion of people who knew nothing about him from 25% in 2013.

Minister of Defense Artis Pabriks, who first became Minister of Foreign Affairs in 2004 and since then has been Minister more often than not, reduced the number of people who don't know about him to 8% through long and hard work.

Minister of Health Daniels Pavļuts has become known in a completely different way than Pabriks. He was a minister in 2011-2013, took a long break after that and has earned his high profile since he took up his current post on January 7 last year. Now, only 7% of Latvians do not know what Pavļuts looks like and, most importantly, what "Pavļuts' golden beds with diamond inlays" look like, as described by Neatkarīgā on October 28 last year. Namely, 120 beds for Covid-19 patients for more than €80 million. More seriously, the story is the opposite, that these beds look like nothing, because there are none. The figures are taken from the Ministry of Health's account of the September 21 cabinet meeting last year, where J. Reirs drew attention to the price of the beds. Since then, D. Pavļuts and his ministry have repeatedly promised to inform the government and the public how the €80 million was actually spent, but the lack of an answer by this day in 2022 suggests that it is impossible to compose an answer about these millions that will not lead to more questions and revelations that much more than €80 million was wasted at the expense of Covid-19.

99% of the country's population is as certain of the existence of Prime Minister Krišjānis Kariņš as they are that K. Kariņš has "more money than there has ever been". That is why K. Kariņš does not demand answers and accountability for the use of money from D. Pavļuts or any other minister. The number of K. Kariņš fans who have already received or are still hoping to receive the money wasted under K. Kariņš' leadership was 25% of those surveyed last December. The decline in his popularity is most clearly expressed by the rise in unpopularity from 26% at the start of his government in February 2019 to 67% last December. Here, it should be emphasized that unpopularity is not unrecognizability. At the end of 2021, 1% of respondents knew nothing about his existence or were unable or unwilling to acknowledge it.