Wise people teach us: before you say something unpleasant to someone, first say something good. Before criticizing the head of government, say something good. Krišjānis Kariņš is very brave because he is not afraid to speak on air and reveal what he really thinks. It does not matter whether he reveals these thoughts consciously or unconsciously. The main thing is that he allows himself to be who he really is. On the one hand, that is to be welcomed, but on the other hand, do we really need a Prime Minister with the kind of vision that he has?
27.01.2022. BLBens Latkovskis 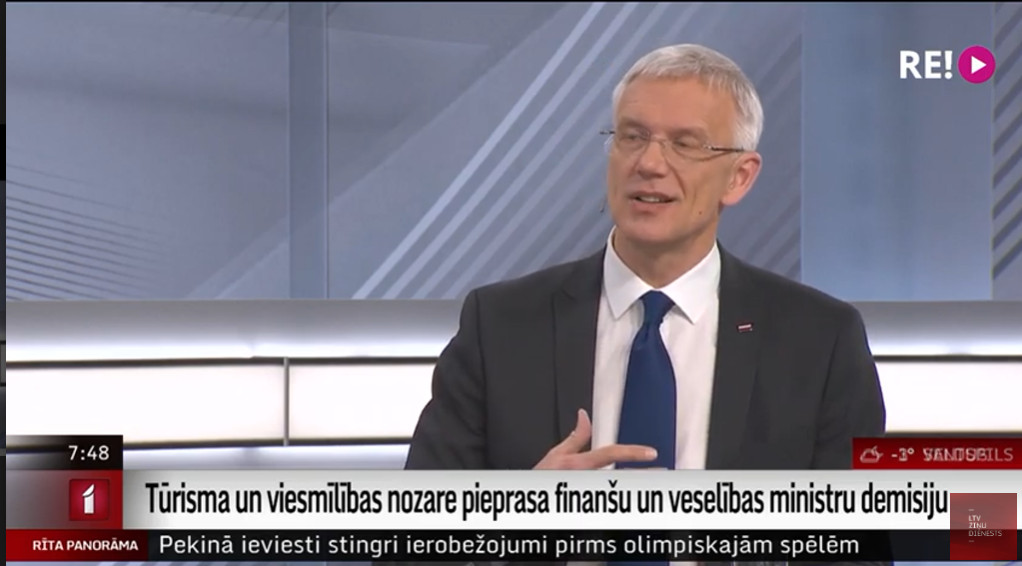 Kariņš admits that society will not be able to support entrepreneurs from its taxes (?) forever ©Ekrānšāviņš no lsm.lv

Here is Kariņš giving a wide-ranging interview on LTV's "Rīta Panorāma", where, among other things, he talks about support for entrepreneurship. Although Kariņš himself was once involved in business (both ice trading and real estate), his understanding of this area is worthy of attention.

LTV "Rīta Panorāma": "The tourism and hospitality industry is calling for the resignation of the finance and health ministers, stressing that these ministers have completely lost the trust of business. What to do?"

Kariņš: "First of all, it should be reminded that there is a minister in the government who has to work with his sectors. It is not the Minister of Health or the Minister of Finance. It is the Minister of Economics. The challenge for us as a society is that we cannot afford to just keep business going forever if that business is not itself in high demand, and that is obviously happening. There is also a change in demand as a result of a change in public behavior after two years of Covid, we are just consuming a bit differently... the industries that are allowed to operate, they also have to look at how to transform their business model, because we as a society are not going to be able to sustain entrepreneurs on our taxes forever..."

There are two things in this statement by Kariņš which at first glance seem very notable, but in fact, they are the very things that have kept Kariņš as head of government and have only increased his party's rating since the last election. Let's start with the second thing, which literally blew up on social networks immediately after the interview. It's the awkward phrase: "We can't afford to just keep sustaining business forever..."

At first glance, it might seem: how can a head of government dare to say something like that, regardless of the context? But let us not jump to conclusions. Let's take a closer look. What are the most common political views of entrepreneurs? Wait a minute, let us first clarify which entrepreneurs we are talking about, because at the moment there are entrepreneurs who operate in the so-called real sector of the economy and entrepreneurs who specialize in the project economy sector. That is to say, they absorb the money that comes from the various projects - green deals, climate neutrality, diversification of society, social projects, and so on.

Entrepreneurs in the real economy, including but not limited to the hospitality (tourism and catering) sector, are rather skeptical about the various "projects" which often make life difficult for the so-called real economy but give the green light to the project economy. From the point of view of the left-leaning "progressive" political class, the first group of entrepreneurs are class enemies. They are the "bad guys". Forces of darkness since the days of the "oligarchs", when Zatlers organised the "Mayflower Revolution".

What is the base electorate of Kariņš? A Twitter audience that "wanted to go to the gym, but then I opened up Prosecco and now I'm sipping...". That is to say, people who are well off and have never earned a penny in their lives through real business. What is more, they mostly receive their funds directly or indirectly from the state budget, but, as we know, the state budget is not created by some kind of entrepreneurship, but at a coalition council meeting or at the European Commission. Just like milk, not from a cow, but produced in a dairy factory and from there is sent to the shelf.

Kariņš has his own electorate, which sees itself as an advanced, progressive, satisfied-with-life stratum of people who automatically agree with the trendiest global trends and for whom all those businessmen who, like Nagainis in the movie "Ceplis", are engaged in the production of mousetraps (the real economy); demand from the government a looser business environment; [most likely] support people like Šlesers and Krištopāns, evoke only negative emotions. Even if they do not applaud loudly this "we can't afford to just keep sustaining business forever" of Kariņš, they will silently support it in their hearts. So let us be under no illusion that, with this statement, Kariņš might have shot himself in the foot and wiped out his ratings. He has merely outlined his priorities more clearly and once again addressed his direct electoral supporters. As I said, thank you for your candor!

A few words on the other thing. On ministerial responsibility. It is even more serious and more unjustifiable. By saying that in government each minister is responsible for his own narrow sector, Kariņš reveals that he does not see government as a team, as a single orchestra, but as a set of individual players, each doing what he thinks is right and desirable. Desirable for himself and his sector, not for the country and society as a whole.

The fact that it is the Finance Minister and the Health Minister who the hospitality industry are calling for the resignation of is a given in the model of government as a team, because it was the Health Minister's pressure for as many restrictions as possible and the Finance Minister's impatience with financial support for the victims of those restrictions that caused the industry to call for the resignation of those ministers. The model that Kariņš has so openly exposed, in which everyone is responsible only for their own narrow sector and the Economy Minister is in charge of business with a very small toolbox of business support, shows an extremely deep crisis in public administration, which Kariņš' personal qualities and ideas of how to run a government have only deepened.

The fact that Latvia's gap with Lithuania and Estonia has only widened in the last three years of Kariņš' leadership is not a consequence of Gobzems' Rhododendron campaign (impact on the economy close to zero) or "nonsense spread by the anti-vaxxers", but of the policies of the Kariņš government. In all sectors. In general.

In any case, the Kariņš' interview should be viewed positively, because it more clearly outlines the possible strategy of each political force in the decisive final game on October 1 this year and shows on which side each of us should stand.