Gemius: nra.lv portal shows annual audience growth of up to 40% 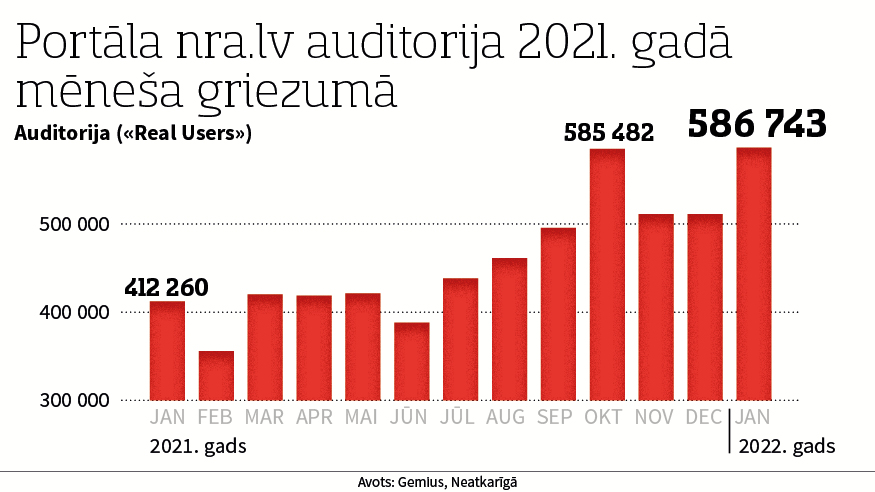 Gemius, the international internet research and technology company, has published a review of the 10 most visited news websites last year. Delfi.lv remained a stable leader throughout the year, while tvnet.lv and lsm.lv fought for second and third place. Meanwhile, the audience records for 2020 were exceeded by nra.lv, la.lv and santa.lv last year, according to the information compiled by the company.

The portal Delfi reached its largest audience in October - 882,000 real users, exceeding the previous year's record of 898,000 users in December 2020. A year ago, tvnet.lv was in a stable second position among news media, but in April, May, July and October 2021, the site was overtaken by the public media news portal lsm.lv in the overall statistics. Like the leader, tvnet.lv reached its largest audience across all devices in October last year, when 732,000 users visited the portal, but did not exceed March 2020, when the portal reached 803,000 readers.

According to Gemius, October was also the most successful for lsm.lv in terms of audience, when the portal reached 738,000 users across all devices combined, but did not exceed the 2020 record of 747,000 real users. The fourth most-read news media outlet was jauns.lv for most of the year, with the largest audience in January - 685,000 users across all devices. While la.lv finished the year as the fifth most visited news website, the portal reached its largest audience - 639,000 users - in November, beating the 2020 record of 638,000 real users by just one thousand. 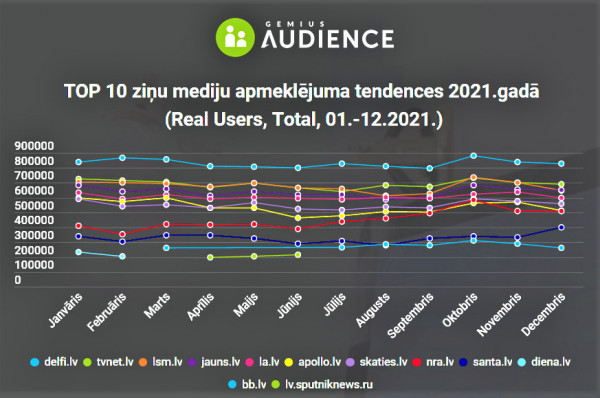 After being in the sixth position in the first three months of the year and reaching its highest audience of the year - 599,000 users - in March, the news portal apollo.lv gave its position to skaties.lv in April, spending the year as the seventh most popular news website, only to swap places with nra.lv in October and drop to the eighth position. Meanwhile, skaties.lv, which spent nine months in the sixth position, reached its largest audience last January with 593,000 real users, breaking the 2020 November record of 624,000.

With an annual audience growth of up to 40 percent, nra.lv reached its peak in October with 585,000 visitors, up from 356,000 in February and surpassing the 2020 peak of 500,000 real users by 85,000 real users. The audience growth in October also enabled the portal to move up to the seventh position among news websites in that month, finishing the rest of the year in the eighth position.

"In 2021, we continued the very successful transition of the paper version Neatkarīgā Rīta Avīze to a high-quality digital newspaper, which started in 2020. This allowed us to combine the latest news and quality journalism - investigative articles, event analysis, interviews - on one portal, nra.lv. This model has proven itself very well," says Nauris Kāpostiņš, Chairman of the Board of SIA Mediju nams.

Finally, the portal diena.lv and two Russian-language news media - bb.lv and lv.sputniknews.ru - fought for the tenth position in the ranking all year.

The publicly available data can be seen at: https://rating.gemius.com/

The top 10 is based on the audience size of 7-74 year-olds on websites, who visited them by connecting to the internet from the territory of Latvia using computers, mobile phones and tablets. The top includes websites that participate in gemiusAudience. The gemiusAudience study is based on a sophisticated and modern methodology that allows the actual number of visitors to be detected, rather than cookies or IP addresses.

Comment
NATO summit results reflect a change in the world’s attitude towards Russia
BLBens Latkovskis
Saga on tree felling rules has come to an end
Imants Vīksne
If NATO enlargement is a problem for Russia, now is a particularly dangerous moment
Imants Vīksne
Latvia could become the EU's car graveyard
Jānis Lasmanis
Latvia's request to NATO: from the first second and the first meter
Imants Vīksne
Expecting the most from NATO but even a little helps
Jānis Lasmanis