After one year and two days, Aivars Lembergs has finally been released from the Riga Central Prison, where he was sentenced after a summary judgement handed down by the current Riga Regional Court deputy chairwoman Irīna Jansone on February 22 last year.
28.02.2022. Ritums Rozenbergs 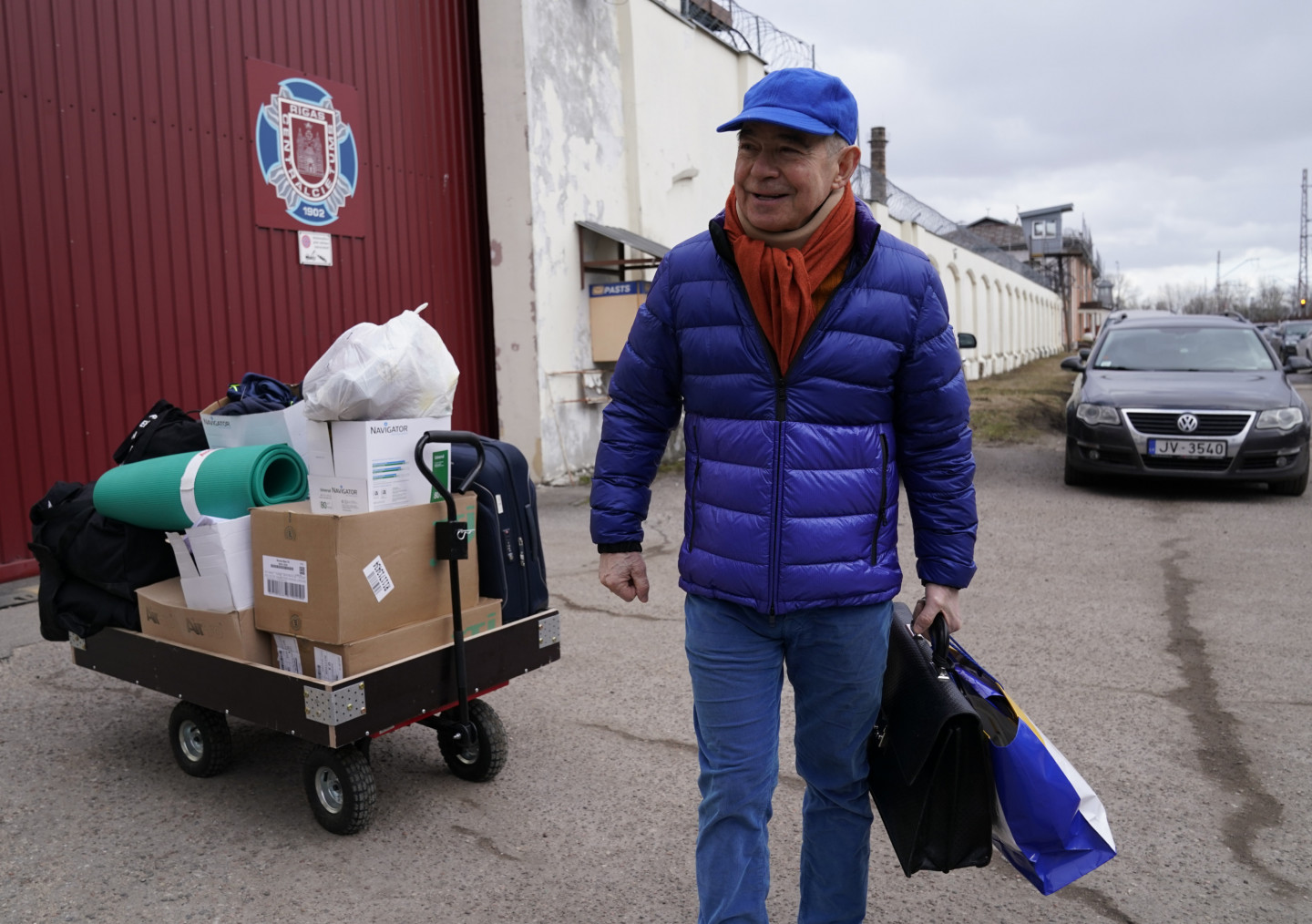 Aivars Lembergs was not idle in prison - the boxes of documents and other materials stacked in the trolley prove it ©Romāns KOKŠAROVS, F64 Photo Agency

This was his second detention in the Lembergs criminal case. Lembergs was arrested for the first time on March 14, 2007, in a rather significant political situation, which proved very unfavorable for the then Mayor of Ventspils. He was held in prison for four months and then spent several months under house arrest.

Through various channels, journalists were told that Lembergs would be released on February 25 at around 14:00-14:15, after posting bail of €100,000 with the State Treasury and completing the relevant formalities.

Less than an hour before the appointed time, journalists began to gather at the prison gates. The clock struck two o'clock in the afternoon, but there was no sign of Lembergs. Occasionally, a member of the staff came out of the prison. Fourteen journalists, including TV cameramen and photographers, gathering at the prison gates to wait for someone to come out of the prison is probably not a very frequent occurrence. One of the prison staff even recorded the sight on his smartphone. The journalists continued to wait in the freezing northwest wind. When the metal door opened once more and two prison officers came out and said "he's coming soon", TV cameramen and photographers took up the best positions to capture the moment.

The big prison gates slowly opened. A trolley pushed by a prison officer appeared. The trolley was loaded with various belongings and boxes of documents. Finally, Lembergs also appeared in the side doors.

Life as in the USSR

After greeting those who were waiting for him, Lembergs told them that his first plans were to meet his family and focus on improving his health. Speaking about prison conditions, he said: "The main problem here is that there is no medicine. It's natural selection. You can feel happy if you don't die. After the Latvian prison, where else can I be happier than to meet my family before I die. It would be good if Latvia joined the European Union. Latvia is pure Soviet Union by the rules of imprisonment. I read one Russian's 2008 complaint to the European Court of Human Rights. It describes the conditions of imprisonment in detail. I read it and thought, what an accurate description. I started to research who the applicant was. It turns out that he is from Russia. But it was written about Russia 14 years ago. So we have not advanced very far."

Lembergs admitted that the main difficulty in prison was the isolation from medical assistance: "In May, I made an appointment to see a urologist, and it still hasn't happened today. You are doomed to die if God has not given you the luck to survive."

About the prison food and its quality, Lembergs said: "I bought something (in the prison shop). Others call it 'pohlyobka'. I call it 'soup'. I can't complain. Of course, in prison you watch TV, which shows an advert for steak... then I change the channel because there's no need to taunt my stomach. I'll manage."

Speaking about his future plans, Lembergs said that he was eager to see his family - his wife and children - again, as well as to see Ventspils and the people of Ventspils: "I haven't seen the huge landmark - the Vizium Science and Innovation Centre - since it's been finished. I have seen the pictures because ten to fifteen were sent to me every week. In every democratic world, the Internet is available in prison. Not here. The Norwegian who shot 77 people, who was sentenced to life imprisonment, has the Internet - there is no Internet here. Legally."

Speaking about contracting the coronavirus, Lembergs said: "I do not wish on anyone to become an opposition politician in Latvia, otherwise you will not get the coronavirus vaccine, not even for money. There was money sent to my account to get the vaccine. I have received the money. I was prepared to pay the price of ten vaccines to get one. But no. Until I got sick. Bordāns hoped I would die. He didn't succeed. I survived. It was bad. I started thinking about what I hadn't done in my life - this and that. The main thing is that there are no connections. You can't get on the phone, you can't tell anybody there - do this and do that. Not only will you die without saying goodbye, you can't even make a phone call. You're sane, you haven't had a stroke when you don't understand anything. It is dramatic to be in such a democracy. But steal something out of someone's pocket and they will put you in there. You can try (laughs and rubs his hands). There are guys like that here. They do something in the autumn and then they stay here in the winter."

Well, how can you not convict?

Continuing to describe life in solitary confinement, Lembergs said: "I had the strictest regime of all, so that I wouldn't make a bribe. I have a conviction for having extorted shares in a company worth five lats from the former prosecutor Kokalis in 1993. Do you see how dangerous I am? Even though the shares belonged to his wife and his wife says that Lembergs did not extort anything from her. But if Kokalis, a former prosecutor, says that - well, how can you not convict?"

At the end of the conversation, Lembergs said that he had once on a walk overheard a prisoner talking about life in prisons in other European countries: "The walk takes place in a 12 square meter cage. In winter it is three square meters smaller. You try walking for an hour in nine square meters. There is a wall with no windows. I heard guys saying: 'I was arrested in Italy and put in jail after a request for judicial assistance. They ask me there in Italy - where do you want to serve your sentence, in Italy or are you going to go back home? I thought - I have relatives and friends here, no, I want to go to Riga. And they sent me here. This is madness! What is this?! Just imagine - in an Italian prison shop, if you have money, you can buy wine, but here they even take away your cologne!' You can judge for yourselves," Lembergs described the situation.

Comment
What was Peter the Great doing in Liepāja?
DSDaiga Stokenberga
NATO summit results reflect a change in the world’s attitude towards Russia
BLBens Latkovskis
Saga on tree felling rules has come to an end
Imants Vīksne
If NATO enlargement is a problem for Russia, now is a particularly dangerous moment
Imants Vīksne
Latvia could become the EU's car graveyard
Jānis Lasmanis
Latvia's request to NATO: from the first second and the first meter
Imants Vīksne