A Vidzeme Regional Court judgment exposes fraud in the purchase of private forests using a deceased forest owner. The scam highlights the until recently well-advertised forest management company SIA Dizozols, which, after changing its name for the third time, has now become SIA BONO.
08.04.2022. NNeatkarīgā 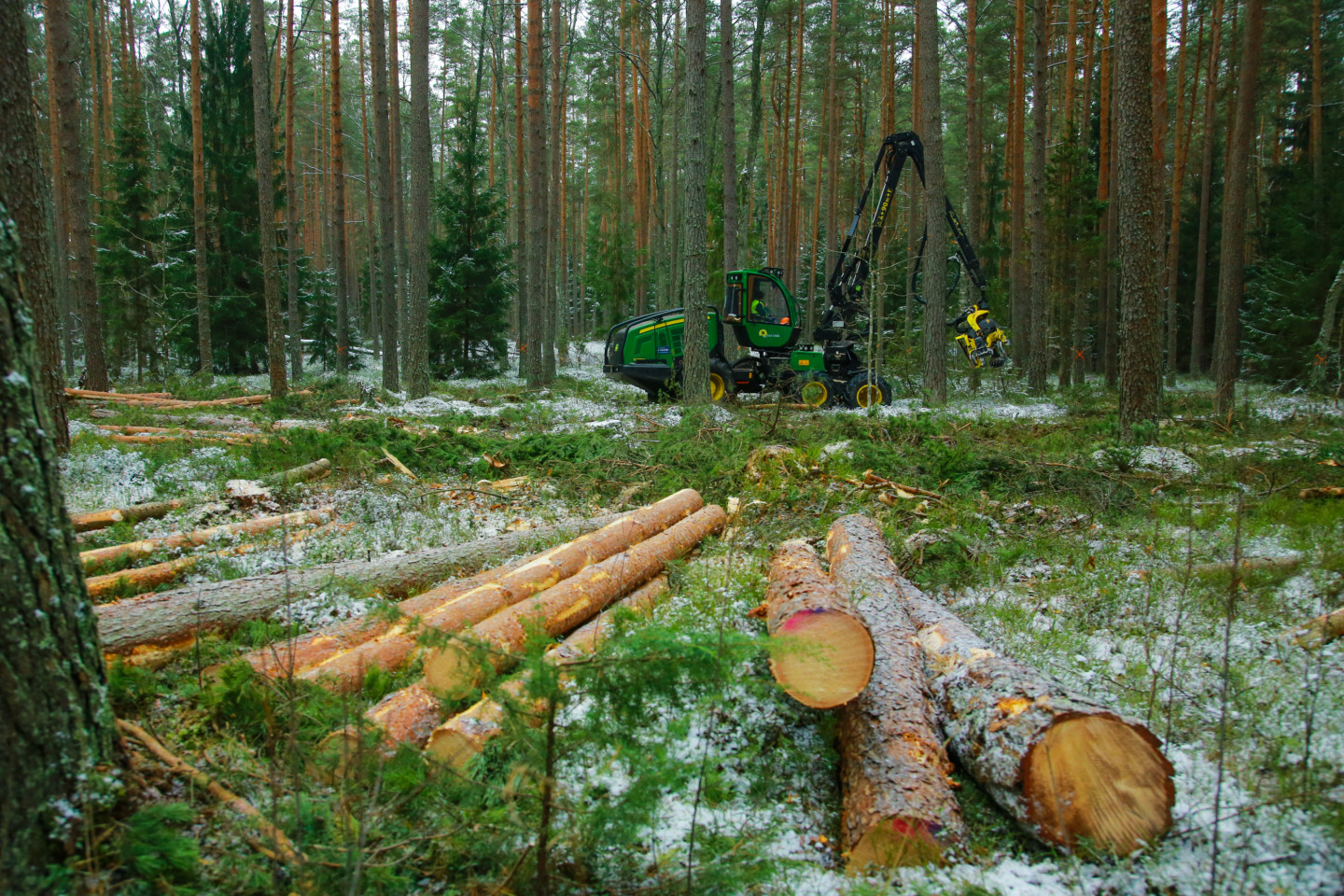 The anonymized judgement of the Vidzeme Regional Court's Civil Chamber of October 16, 2018, reveals how forest buyers, who also call themselves forest managers, sometimes carry out fictitious transactions using even deceased former forest owners. They try to cover their tracks by reselling the forest they have acquired to third parties. The case involves SIA Dizozols, now SIA BONO, which was once frequently mentioned in the media. In total, the company has changed its name three times - first SIA LV meži, then SIA Dizozols, and finally SIA BONO. The court judgment shows that SIA Dizozols, now SIA BONO, knew that a fraudulent forest property was involved in its transaction.

The deceased and resale

The judgment states that person D, born in 1935, owned forest property A. Person D died on July 28, 2004, in Norway, but on the basis of an alleged sale and purchase agreement concluded on November 9, 2004, in Aizkraukle between person D and buyer B, property A was sold for LVL 37,000. The transaction was certified by a notary public in Aizkraukle. On the basis of this document, on March 8, 2016, the Land Register registered the ownership of property A to person B. The very next day, B sold the newly acquired property to person C. One month later, person C sold the newly acquired property to SIA LV meži (now SIA Dizozols), which registered the transaction in the Land Register in May 2016, and in September SIA LV meži sold the aforementioned property A to SIA Sundin mežs.

Having examined the case file and heard the arguments of the parties, the Court notes that, since July 28, 2004, property A has legally belonged to the heir of the deceased person D, person A, who is the claimant in these proceedings. The court finds that the contract of sale between the deceased person D and person B is "a forgery and cannot produce any legal effects". The court logically concluded: "It is apparent from the file that (person D) had died on July 28, 2004, i.e. before the date of the transaction referred to, November 9, 2004. Therefore, (person D) could not have come to Aizkraukle to the notary and concluded the sale and purchase agreement and alienated the property of (person B)."

The court also transcribed the criminal case materials related to the same story attached to the case: "The instigator of the proceedings has admitted that the immovable property (name A) was illegally alienated by criminal offences from (person A). .. The criminal proceedings contain information about the fraud and illegal sale of the immovable property (name A) by the defendants (person B) and (person C) in an organized group on April 26, 2016, to SIA LV meži (now SIA BONO). (Person E) procured a forged sale and purchase agreement, whereby (person D) allegedly sold and transferred the immovable property to (person B). Thereafter, (person E) arranged the sale of the defrauded immovable property, first involving (person F) and her civil husband (person C), who initially fictitiously purchased the defrauded immovable property from the defendant (person B) on March 10, 2016. Subsequently, (person C) resold the property to a buyer that (person E) found in SIA LV meži (now SIA BONO), who resold it to SIA Sundin mežs on September 14, 2016."

The fact that fraud with forest property is a common practice in the forest business is also evidenced by the information published last October on nra.lv that officials of SIA Dizozols, now SIA BONO, registered in Valmiera, and persons related to this company are accused of defrauding SIA FC Lapegle, registered in Raiskums district of Pārgaujas municipality, and its official Mariss Zariņš. In the application to the Prosecutor General's Office, signed by Zariņš both as an individual and as a member of the board of SIA FC Lapegle, it is requested to initiate criminal proceedings and to declare the entrepreneur and the company he manages as victims. It is also requested that the right to compensation be recognized - EUR 536,961.84 for Zariņš and EUR 36,800.53 for SIA FC Lapegle. The application describes that in the spring of 2017, "long-term cooperation in the field of forest property valuation, acquisition and resale was established between M. Zariņš and SIA Dizozols, within which SIA Dizozols is currently obliged to make a payment to Mariss Zariņš of a share of funds (profit) in the amount of at least EUR 536,961.84 from money earned as a result of joint cooperation. However, after the establishment of a joint property fund, resale of the properties included in it and receipt of funds (purchase fee) from the final buyer, SIA Dizozols currently not only avoids any communication with Mariss Zariņš and refuses to pay the funds, but completely denies the existence of any cooperation, deliberately hides documents confirming cooperation, refuses to provide information on the resale prices of properties purchased within the joint cooperation, volumes of sawn timber and their sales prices, and has closed Mariss Zariņš's access to jointly created and maintained data files. At the same time, SIA Dizozols has committed another independent criminal offense, which manifests itself in the misappropriation of funds of Mariss Zariņš and SIA FC Lapegle for the total amount of EUR 36,800.53."

The essence of deceitful schemes

A summary of publicly reported cases of forest fraud shows that buyers or managers often under-report the volume of trees sold to their clients, and that buyers who later turn out to be deceitful often promise to pay more for the forest than their competitors in the forest buying business.

Initially, the forest purchase or management company markets itself as a full-cycle forest manager. An impressive advertising campaign is carried out. Owners rely on the company to fully manage their forests, but the reality is that the company is only interested in harvesting high-quality trees and extracting sawlogs for sale. The logging process is chaotic. Often, the forest management or buying company that advertises itself so widely does not have its own logging team or the necessary machinery to carry out the forest work. Some clients are forced to stop working with them when they notice discrepancies in their tree surveys.

There are also two other elements to the deception. The first is the buying up of properties from gullible landowners who, trusting the promises of the highest price offered, in reality, sell their properties for around 40% below the real market value. Customers are misled into believing that the property will remain the property of the operator (service provider or buyer) in the long term and will not be sold to foreigners. This argument works. Many landowners who do not want their native land to be owned by Scandinavian funds believe it. But in reality, this is the business model: the land acquired is resold to Scandinavian funds. In order to realize these deals, money is borrowed at exorbitant interest rates (30-40%) from, for example, the crowdfunding platform Crowdestor. The loan payment is delayed for a long time, but is eventually repaid, including penalty interest, which totals around 40% of the total loan amount. This is being presented in the media as a success story: the investors in the crowdfunding platform have made a large profit by securing this loan. But the reality is that the landowners have been offered an abnormally low price if a company has bought a piece of land from which it is able to secure both a profit for itself and a disproportionately high return for its investors.

Among others, Jānis Upenieks, a politician from the former Zatlers' party and former economic adviser to Prime Minister Krišjānis Kariņš, became a member of the board of SIA Dizozols in November 2021. He is now also a member of the board of SIA BONO. Last March, the newspaper Diena described in detail the beneficiaries of the Crowdestor money lending platform. As the newspaper pointed out, at one point in time, loans from SIA Dizozols accounted for a significant part of all outstanding loans on the Crowdestor platform. "Valmiera councillor Jānis Upenieks (JV), who hastily left his post as advisor to Prime Minister Krišjānis Karinis (JV) as soon as publications about Crowdestor projects appeared in the press." As the newspaper points out, "what Mārtiņš Tenbergs, Guntars Galvanovskis, Jānis Upenieks and others have in common is their close ties to the Latvian political environment and the fact that their most active periods coincide with the periods of their greatest political influence. For all of them it started with Zatlers' Reform Party (Zatlera Reformu partija), but for Galvanovskis and Upenieks it continues through New Unity (Jaunā Vienotība) and, according to Diena's sources, very probably also through another currently very influential, known in law enforcement instances, handler and politician with rural property in Burtnieki, the municipality where Upenieks has just become a deputy". The media report that Jānis Timma, owner of Crowdestor, specifically underlined the parallel work of an employee of SIA Dizozols (meaning Upenieks) as economic adviser to the Prime Minister.