Russian-speakers' letter of condemnation of Russian aggression has been published. The process must continue

Latvian Russian-speakers have published a letter/exhortation on the initiative of LTV journalist Olga Dragiļeva, condemning Russia's criminal war against Ukraine and asking not to celebrate May 9 this year.
11.04.2022. BLBens Latkovskis 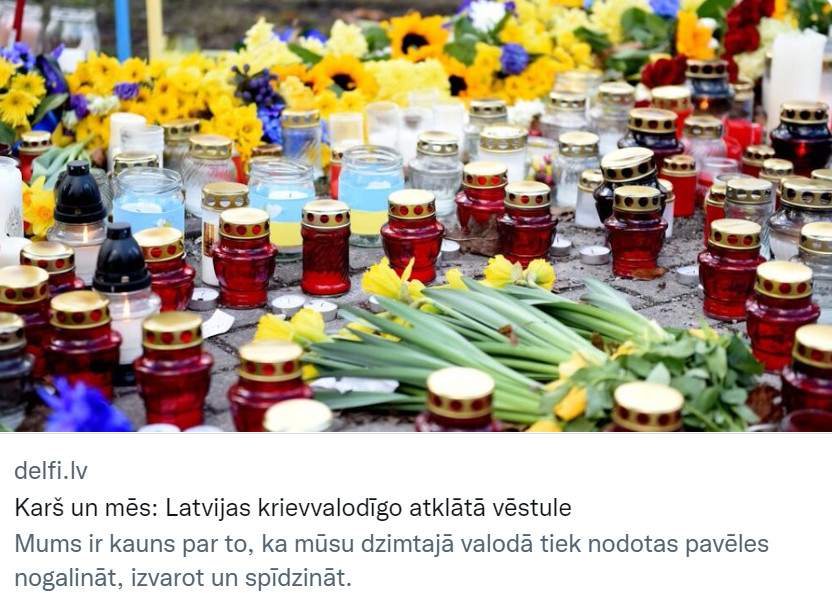 The war launched by Russia is forcing Latvia to reconsider its entire political context, including its attitude towards May 9. The symbolic meaning of this date has fundamentally changed in recent decades. It has changed from a celebration of victory over fascism to a celebration of "we can do it again". In the Latvian context, "we can do it again" means "we can occupy again". This is what is meant by the widespread celebration of May 9 in Pārdaugava at the Occupation Monument, and this is the attitude of the majority of Latvians towards this "celebration".

Therefore, the paragraph of the Russian-speakers' letter that mentions May 9 should be quoted in full: "Those who celebrate May 9 are asked to be aware that to do so this year in Victory Park is to support the war. Your family history is important and you have every right to remember your loved ones lost in war. But you must not ignore the fact that the Russian government is now using the symbolism of the Second World War to incite a new war. We ask you not to celebrate while innocent people are being tortured and killed every day in Ukraine. As you commemorate your own losses, respect the pain of others."

I would like to point out at once that I do not consider it necessary to look for any issues, any linguistic or historical inaccuracies in this exhortation, because I consider it an extremely important, vital act that can break the ice of mutual distrust that has formed in part of Latvian society. It must be admitted that the Latvian public has been waiting for such a call from the Latvian Russian-speaking people for a long time, and it is precisely the lack of such a clear position that has provoked the loud objections to the performances of Ragozins, Kozins and their supporters in the public media in recent weeks.

I wrote in the previous paragraph that it can break the ice of distrust, but it can also remain unbroken. It may be that this letter will only create a small crack in that ice, which will quickly be covered by a new, even thicker layer of frost. What does the process depend on? First of all, on how widely this appeal is supported in the Russian part of Latvian society. It depends on the number of people who sign it, because so far the circle of signatories is rather narrow and largely linked to state structures. It is mostly signed by people who, in Putin's own Russia, are somewhat derogatorily called budgeters. It is not only relatively easy for them to sign such an appeal, but also profitable.

I do not want to be misunderstood. I am not saying that they have signed this appeal for some conjunctural reason. I am only saying that they are hardly risking anything by signing this letter. It would be a different matter if it were signed by people who were risking something serious by putting their signature on it. For example, journalists working for Russian private publications or politicians targeting the Russian electorate. It is the latter who will largely determine whether a serious break in inter-ethnic relations will actually happen, or whether this letter will remain a one-day affair with no long-term consequences.

It must be understood that this is only the first step on the long road towards civic-ethnic cohesion in Latvia. Therefore, we should not focus too much on the various condemnatory, incredulous or derisive reactions from sceptics on both sides. Such reactions are only logical for the mutually distrustful inter-ethnic relations that have long prevailed in our society, but about which it was not customary to speak.

At the same time, we should be aware that such a skeptical reaction will prove to be entirely justified if further steps are not taken. I have already mentioned the need for politicians to take a clear position. At the moment, it is they who should heed the letter's appeal the most: "Do everything you can to prevent them [Putin's silent supporters] from closing their eyes and remaining neutral, staying out of politics and otherwise tacitly supporting Russia's war crimes".

It cannot be denied that Latvian Russian politicians will have to take a risk in making their position on this issue clear. But in the current situation, there are no other options. In a situation where good and evil are clearly outlined, trying to sit on two chairs at the same time means siding with evil. With all the consequences that entails. With the missed opportunity to actually do something good for the Latvian state, because now that Russia's war crimes have become indisputable, there is a chance to stop associating ourselves with the occupation, the occupiers or their successors.

You have to make a choice - to stand with Latvia, with Latvians, or... to continue gnashing your teeth about the glory of the past and stubbornly muttering under your nose on May 9 - "we can do it again". Bucha, Kramatorsk... What else?