The incumbent President Emmanuel Macron won the most votes in Sunday's French presidential election and will face second-placed National Rally candidate Marine Le Pen in the next round in two weeks' time.
12.04.2022. BLBens Latkovskis 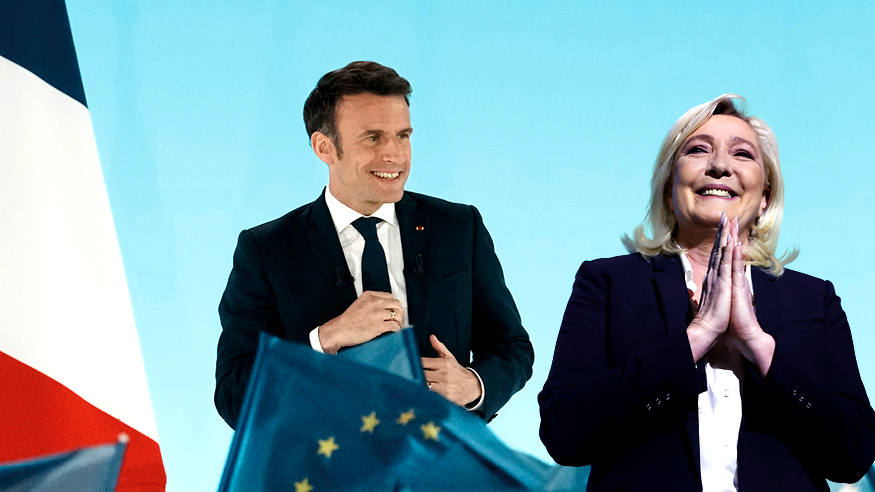 I mention this election not because its result is of any major significance for European politics, but on the contrary, to point out the marginal, peripheral nature of this election, which was also considered uncommonly boring in France itself. Then again, British Prime Minister Boris Johnson's Saturday stroll through the center of Kyiv was a more significant political event. As was Macron's exchange of "pleasantries" with Polish Prime Minister Mateusz Morawiecki the day before. What is the basis for such conclusions?

When one wants to point to the long-term strategic thinking of China's leaders, one often invokes the popular apocryphal of Deng Xiaoping, who, at the 200th anniversary celebrations of the French Revolution, when asked what impact that revolution had on human development, allegedly replied that too little time had passed to make a definitive assessment. Looking at France today, it is clear what the wise Deng meant by this evasive answer.

France's influence in Europe has been declining consistently over the last 200 years. During the Napoleonic wars, not only the aristocrats of Russia but also of many other countries spoke predominantly French and tried to imitate French fashion and manners in everything; 100 years ago, French was the world's main language of communication, spoken by diplomats and merchants, but now, in the context of the Russian-Ukrainian war, France's peripheral role is clearly emerging.

France itself does not yet seem to be aware of its secondary position and sees Macron's phone calls to Putin, which the rest of the world is mocking, as the leader of a great power calling the leader of another great power. In other words, most French people see this communication not as an embarrassment but as a sign of belonging to the "big guys' club". For our part, let us add: yesterday's big guys' club.

If we are talking about the world of the future, we must not forget the causes and objectives of the Russia-Ukraine war. Since this forgetfulness is often committed and the focus is diverted to unimportant details, I'll remind you of these objectives. They were defined by Russian Foreign Minister Sergei Lavrov in his programmatic interview with the RBK television channel on March 16 this year (no doubt he was broadcasting Putin's vision): "This [what is happening now] is not about Ukraine at all. To be more precise, it is not as much about Ukraine as it is about the legal world order. The U.S. has steamrolled all of Europe… a historic turn is taking place. This is an epochal moment in modern history. It reflects the fight for what the world order is going to look like."

If the struggle is about the next world order (and not about the superficial Donbas that nobody wants), then it is clear that after the war the former world order will be no more. There will be another order. There will probably no longer be the totally discredited UN, which is incapable of providing even the illusion of security and order, but something completely different. If anyone thinks that there is little sign of this fundamental change at the moment, I remind them that the war has only just begun, a month and a half ago. In historical analogies, it is only October 1939. So the fully reformatted new world order is still several years away.

It is premature to fantasize about this new world order that will emerge after Putin's Russia is defeated (the alternative, unlikely option - Russia achieving its dominance in Europe through nuclear blackmail), but already today's Churchills and Daladiers are coming into their own. In any case, Macron is unlikely to go down in history as a brilliant, courageous, far-sighted politician with his efforts to "tame" Putin and force him to sit quietly in the Kremlin (in his bunker) for the rest of his life.

In this respect, Macron pales not only in comparison with his British counterpart, but also with the Polish leaders. Let us not even mention Zelensky. When Polish Prime Minister Morawiecki scolds Macron - well, what have you achieved with your phone calls - Macron reacts like an offended teenager. His attempts to accuse the Polish leader of anti-Semitism without the slightest basis (BBC wording) show only one thing. Macron cannot possibly accept that (in his mind) a Polish Prime Minister can say something to him - the President of the great France - that is not respectful enough. Macron has simply not noticed that Poland's role and practical action in Europe is now far "greater" (more important) than France's, with its leader's pointless calls to Putin.

No wonder the polls show that support for Macron is declining with the age of the French electorate. The younger the electorate, the lower the support for Macron. And vice versa. Macron is the darling of the pensioners there. The candidate of a bygone era. This is a very important nuance that clearly indicates the trends of the future. Here, Macron-style leaders ("correctly" talking centrists) still count as mainstream, but in Western Europe, it is already a stage passed. It is old-fashioned to talk about Macron. Uncool.

Interestingly, both France and England are now repeating the historical path of the Second World War. France is repeating a path that it remembers unwillingly (Daladier, Vichy France, Pétain, extensive collaboration), while Britain, under Johnson, is trying to emulate what it has always been proud of. Johnson is clearly at peace with Churchill's laurels. It is under his leadership that Britain, along with Poland and other Eastern European countries (except Hungary), has emerged as the leader of the new Europe, the main supporter of Ukraine and the enemy of the Putin regime.

Whatever may be said about Johnson, no one has ever questioned his education, his erudition, his wisdom. He understands perfectly well that being brave is more beneficial than being a coward. That is why Johnson goes to Kyiv, Morawiecki makes disparaging remarks to Macron, while the latter merely calls Putin. Unless Putin is the boss of Europe in the world order of the future, France will have to content itself with the peripheral place that Macron, whose victory in the second round is in little doubt, will have prepared for it.