What are the trillions in defense budgets being saved for?

People only realize the significance of what is happening after the fact. This is the case both in everyday life and in big politics. At the moment, the significance of the war in Ukraine is poorly grasped by people outside the immediate war zone. This is also reflected in the main topics debated by the two candidates before the French presidential elections on Sunday.
25.04.2022. BLBens Latkovskis 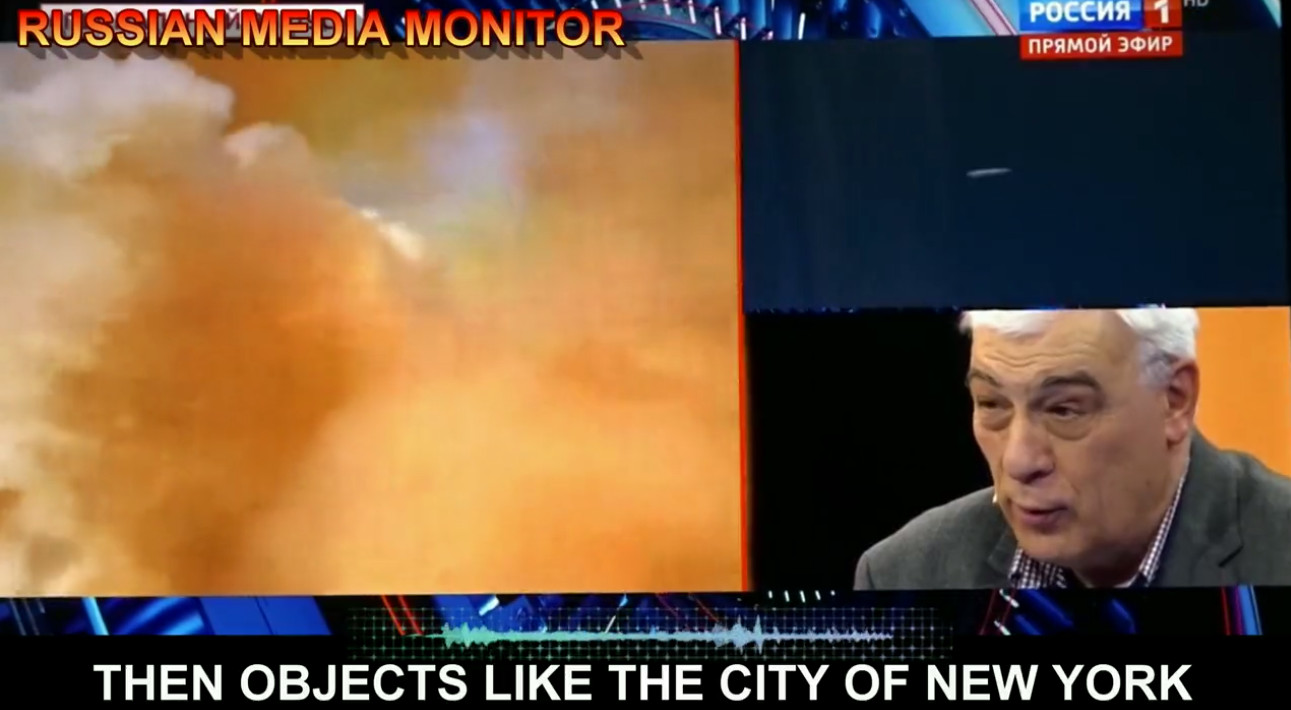 Nuclear strikes against the West are discussed daily on Russian propaganda TV channels. In this particular program with Skabeyeva, a military "expert" explained what would be the consequences of a ballistic intercontinental ballistic missile with a 7.5 megaton nuclear charge being fired at New York ©Ekrānšāviņš

The main issue on which the teams of Emmanuel Macron and Marine Le Pen bickered was the rise in prices and how to combat it. I will not analyze these issues in this article, and I mention them only to show how ordinary citizens feel about what is going on in the world. The fact that Russia's collective television is 24/7 filled with calls to finally defeat that "damned Western domination" and to drop an atomic bomb on Washington, Brussels and Warsaw is of little interest to anyone.

Of course, it can be said that all those guests in Solovyov's TV studios are crazy maniacs who can only brandish their cardboard swords on TV, but cannot demonstrate anything serious on the real battlefield in Ukraine. One can joke about haloperidol tablets, aminazine shots, straitjackets and doors without handles. All that is true, but the problem is that Putin also lives in this hypothetical 6th ward. And not only him. Most of those who surround him also live there. So the question arises: can we ignore this parallel reality in which a huge part of Russian society lives?

To answer this question, let us look at what is happening through the eyes of Western society. What is happening? For two months now, the Russo-Ukrainian war has been going on, with a supposed struggle for territory. The main question in this war is supposedly how much Russia will manage to bite off and annex to itself. Why supposedly, one may ask? Is it not the truth? Unfortunately, it isn't. Unfortunately, it is wishful thinking, because the problem is more serious.

Let us look at the root. After World War II, the so-called Yalta-Potsdam world order emerged, which was finalized in 1975 in the Final Act of the Helsinki Conference. This world order established the permanence of borders and the illegitimacy of changing these borders as a result of hostilities. It was on the basis of the principles enshrined in the Helsinki Accords that the borders of the former United Republics and autonomous regions of the USSR, and later of Yugoslavia during its break-up, were not changed by a centimeter.

According to the Helsinki Accords of 1975, the inviolability of borders was the foundation on which the entire world order rested. The establishment of Kosovo in 2008 followed the exact borders of its autonomous region, and Kosovo was not annexed to Albania precisely because of the principle of the immutability of these borders. That is also why the self-proclaimed republics of Abkhazia and South Ossetia were not annexed by Russia, and Latvia recognized its borders not in accordance with the peace treaty of August 11, 1920, but with the 1975 (1991) borders of the Latvian SSR. This principle was violated for the first time on March 18, 2014, with the annexation of Crimea to Russia.

On March 18, 2014, the Yalta-Potsdam/Helsinki world order cracked significantly. I write "cracked" because the annexation of Crimea took place almost without bloodshed, relatively peacefully. The world, with the then leader of the so-called free world, Barack Obama, at its head, decided to turn a blind eye to this crack and carry on as if nothing had happened. The so-called sanctions are not even worth mentioning. Everything continued as usual, both economically (the Nord Stream 2 project) and humanly (the 2018 FIFA World Cup in Russia).

On February 24, 2022, the existing world order broke apart completely. That's it. The mug is broken and cannot be glued back together. Or rather, some politicians are still trying to glue it back together and say that it's no big deal - we can carry on using this glued-together mug, despite the water leaking all over the place. So what now? Are we now going to sit at this table and change the napkins under this mug, pretending that everything is all right, Madam?

The world spends enormous resources on the military. NATO countries alone spend more than a trillion dollars a year, the lion's share of which is spent by the US ($778 billion in the 2020 financial year). Now, from time to time, US President Joe Biden announces the delivery of an 800 million dollar arms package to Ukraine. The US has already supplied Ukraine with arms worth almost three billion dollars and these supplies will continue. Other NATO countries are also increasing their deliveries, which is a good thing.

But let us compare the volumes. One weighting scale cup has trillions in the balance, the other a few billion. The question for NATO members is: why are you spending this 2% (a little more or less) of your GDP on the military? What is the threat to you? Not in the abstract, but specifically. Today and tomorrow. What specifically?

The answer is quite simple. Who broke the mug (the current world order)? That is the main threat. So Russia, with its crazed dictator Putin at its head. But if so, back to the question: what are you spending all this money on? For a tick mark, just to have impressive toys? Or are the trillions intended to resist the aggressor?

If the latter, then, look, there is the aggressor, look, there is the threat, and look, there is the army that is resisting the aggressor. Let us add in brackets - resisting in our place. So why such stinginess? Is it because we would like to deal with it on the cheap? Let those Ukrainians over there fight for their freedom and ours, while we count the cents, give away 1% of the total trillions of defense budget (so far, not even 1%) for Ukraine and consider that we have done our duty (well, what can you do, Ukraine is not a NATO member after all).

Just now, the US Treasury Secretary, former Federal Reserve chief Janet Yellen, said that if Europe imposes a ban on Russian oil and gas imports, this could have unprecedented economic consequences. But what are the consequences of leaving Putin in power in the Kremlin and his further military adventures? What would be the economic consequences of a nuclear strike on, say, Warsaw? Yellen and the rest of the political class apparently do not even want to think about that. For them, the voters are the most important thing, and their main source of concern is the high price of petrol.

It is perfectly normal for the common man to want to live in peace and prosperity. Clearly, he does not even want to think about war. But if he does not want bombs to fall on his home too, then he should worry less about inflation than about how many weapons have been delivered to Ukraine today. This man needs to be reminded every moment that the Ukrainian army is fighting for him too, because the Putin regime cannot stop halfway. It's one or the other. There is no turning back. The system is broken, and the key is broken off. Therefore, the sooner the world realizes that it can no longer count cents and save money at Ukraine's expense, the better.

It is time to put the trillions invested in the defense system to work. That does not mean engaging in war. It means giving weapons to the maximum extent to those who are already at war. For the future of us all.