The French presidential election ended with no surprises. The incumbent Emmanuel Macron (for the first time in 20 years, a French President was re-elected for a second term) convincingly defeated Marine Le Pen with 58.6% of the vote.
26.04.2022. BLBens Latkovskis 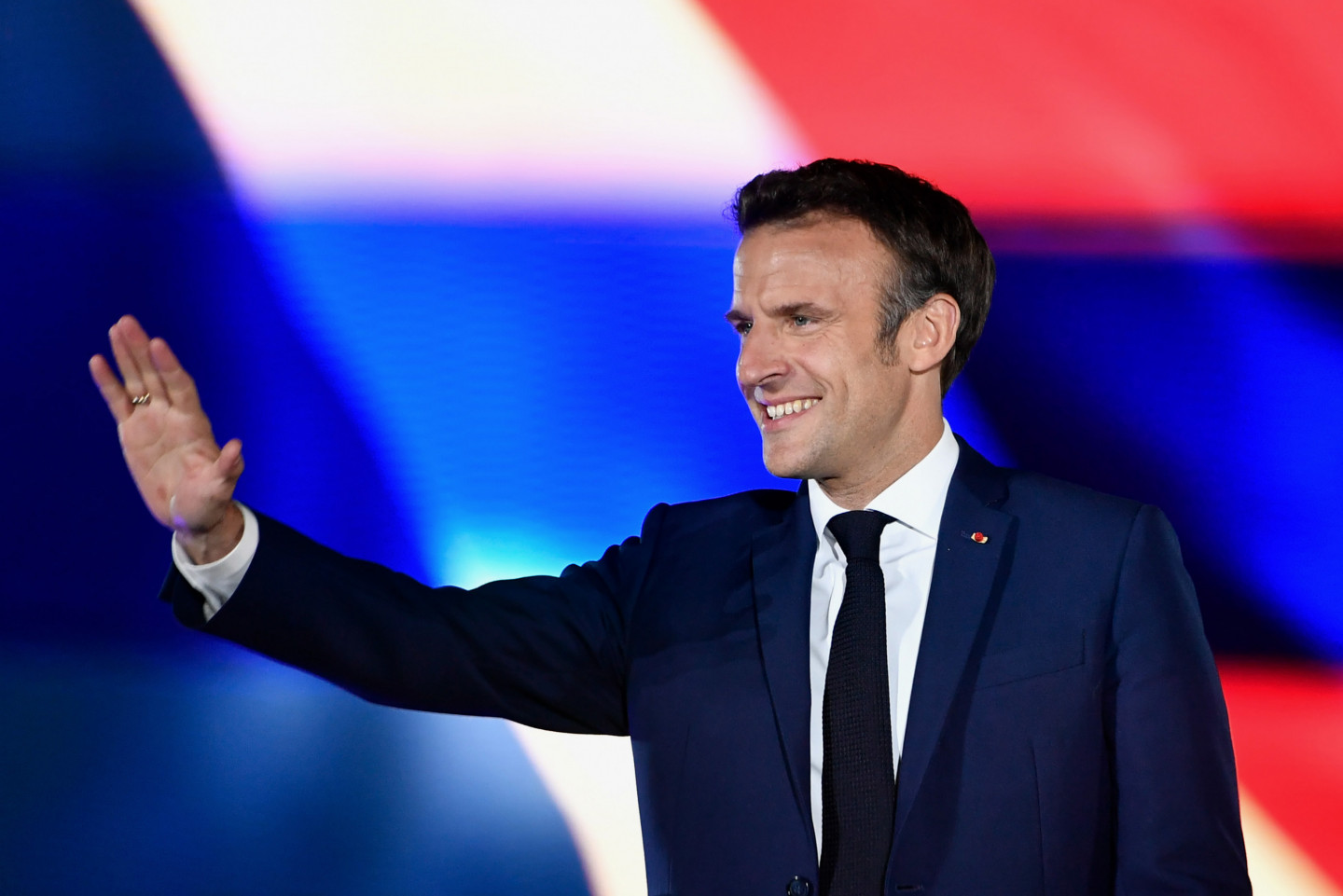 One of the main features of the French presidential election was the extremely marginal role played by the Russia-Ukraine war. In his address to his supporters after the election results were announced, Macron promised to turn France into an ecological superpower! Meanwhile, there is the bloodiest war in 80 years in Europe. The existential question on the agenda is how the world should react if Putin does decide to use tactical nuclear weapons, but the President who won the election is giving a speech on the level of the teenager/schoolgirl Greta Thunberg. That, unfortunately, is today's reality.

The war in Ukraine is clearly not seen by the vast majority of French people as having any impact on their lives. It is a war somewhere far away. Yes, it is unpleasant that there are bloody atrocities taking place somewhere on the steppes today, but it does not concern me. Unlike inflation, the green deal, sex change issues and the prospects for economic development.

Most Western European countries are still convinced that there is a turf war in Ukraine between two "fraternal" but civilized Eastern European countries, which has long ceased to be an issue for us in the "developed world". Mikhail Khodorkovsky, an opponent of Putin who knows him well, warns the West in an interview with the BBC that it is deluding itself into thinking that Putin is at war with Ukraine and that his interests will be limited to that. "In Putin's mind, he is already at war with NATO and the United States and not just Ukraine," Khodorkovsky says, suggesting that the West's efforts to distance itself as much as possible from this war and stay on the outside are simply naive.

At the same time, it has to be admitted that the mere fact that the Elysée Palace will be home to an adequate politician for the next five years and not to Putin's friend/debtor, makes the world feel a little calmer. Macron's re-election is also being received with relief in Ukraine, where it is widely felt that Macron had to be more tolerant of Putin before the election, given the Russophilic attitude of large sections of the French public. Now that he has won a full mandate (a convincing victory), he can afford to pursue a much more decisive, harsher policy towards Putin.

In an interview with TV3's “900 sekundes” morning program, Latvian Institute of International Affairs researcher Kārlis Bukovskis noted that "the electorate is becoming increasingly cynical in France too. Values and principles that were once considered sacrosanct - European integration, NATO membership - are becoming increasingly alienating to voters". There is a logical reason for this increase in cynicism: the fish starts rotting from the head.

On the eve of the French presidential elections, the Telegraph published a scandalous article citing a secret EU report, claiming that between 2015 and 2022, ten EU countries had sold €350 million worth of arms to Russia, circumventing an arms embargo already imposed in 2014. Unsurprisingly, Germany and France particularly stood out in this "business", with deals worth €121 million and €152 million respectively.

Back in 2021, when Russia was already openly preparing to invade Ukraine and was massing an unprecedented armed force on its borders, EU Member States managed to sell Russia €39 million worth of arms and ammunition. These weapons and warheads are now bombing Ukrainian cities and killing people.

However, as they say, it is not so much the mistake itself as the reaction to it that is at the heart of the matter. In Ukraine, the publication of this British publication caused a huge wave of indignation, but in Western Europe it has not caused any scandal, at least not yet. In any case, in England, Prime Minister Boris Johnson's Covid restriction carousing is of incomparably greater public concern than the violations of the Russian arms embargo, even though the UK is also involved. True, to a much lesser extent than Russia's inseparable friends, France and Germany. These violations of the EU embargo do not seem to matter to the political class (and let's not even talk about the common people). Obviously because it is difficult to bake political "pies" out of them, unlike Johnson's carousing, which was easily blown up to quite fantastic proportions.

If we are touching on Western political morality and value systems, we cannot but mention the editorial (!) of the once-influential (perhaps even the world's most influential) newspaper The New York Times, which can hardly be called anything other than a manifesto for useful idiots. This editorial saw the light of day almost on the same day that the Berliner Zeitung published a letter from German "intellectuals" (in quotation marks, of course) appealing to the German government. Coincidence?

The main point of both these publications is the same: it is useless to fight evil, because evil has unlimited possibilities to defend itself. Therefore, there is no point in torturing ourselves with economic sanctions that hurt us. They are not only useless, because they do nothing, but even harmful, because they give evil a chance to justify itself and "rally round the flag". A favorable and forgiving attitude towards Russia would be much more effective against evil. It would make Putin ashamed, uncomfortable in the face of such generosity and reduce his desire to do evil.

The German "intellectuals" go even further and call on the German government not to help Ukraine with weapons, but on the contrary to put pressure on the Ukrainian leadership to surrender to Putin as soon as possible. For Ukraine's own good. The idea of the appeal is simple: Ukraine is going to lose anyway, so the sooner and with less damage, the better. What will happen after this surrender and what Putin will decide to do the next day is not discussed by the German "intellectuals".

When Ukraine's admission to the EU is discussed in Western Europe, there is often grumbling that Ukraine has not yet reached a European understanding of values. Ukraine is consumed by corruption, and even now, in a time of war, corruption has not disappeared. Maybe so. There is probably no smoke without fire. But when we talk about corruption in Ukraine, we should not forget about the mega-corruption imports that the West is exporting from Russia with open arms. Until now and still.

The most visible symbol of this mega-corruption, Gerhard Schröder, is not only not on the list of sanctioned persons, but is still both a member of the board of directors of Rosneft and a member of the Social Democratic Party of Germany. What's more. He has just admitted in an interview with the aforementioned New York Times that isolating Russia in the long term is unpromising, so there is no point in even starting. It is very sad that a once influential media outlet, which after Trump's 2016 victory rapidly turned into a Brezhnev era Pravda-level agitation website, is unable to regain its former glory and, together with the "intellectualism" of the Western left, continues to sink deeper and deeper into the moral mire, regularly publishing texts worthy of Putin's press secretary.

Schröder himself has another function besides broadcasting Putin's ideas. As the most visible representative of this Russian-imported mega-corruption, he covers for the rest. In his shadow, it is easier not to see the others. And it is not just about figures like Schröder, François Fillon, Karin Kneissl or others. It is time to start talking seriously about the possible political corruption of Angela Merkel, Nicolas Sarkozy, François Hollande, Emmanuel Macron, Olaf Scholz and others, where the political vector seems to coincide with what the Kremlin wants. For example, the decision of the German government (Merkel's government, which did not even have a Green Party at the time) to stop using nuclear power and switch to gas. The much-publicized wind and solar alternatives turned out to be a smokescreen, because now that the practical consequences of this decision have become clear, it turns out that there is no way to end energy dependence on Russia.

That is why Scholz is now joining the aforementioned useful idiots or corruptors (however you prefer) who say that energy sanctions will not stop Putin and will only devastate the German economy. Scholz also says that supplying heavy weapons to Ukraine will not work, but will lead to World War III. These stories are somehow suspiciously consistent with the stories that Putin's propagandists broadcast on a daily basis. Is it stupidity, naivety, Kremlin money?

It is becoming increasingly clear that the European political system will have to be fundamentally revised after the war, because the war has exposed the comprehensive moral and ideological degradation of a huge section of the Western political class, which precludes its claim to being the future world leaders.