Russia's nuclear blackmail loses effect from being used too often

Yesterday, NATO and a few invited defense ministers from other countries held a meeting on Ukrainian defense issues (arms supplies) at the US military base in Ramstein, Germany. On the eve of this meeting, Russian Foreign Minister Sergey Lavrov threatened World War III in a very peculiar environment (see picture).
27.04.2022. BLBens Latkovskis 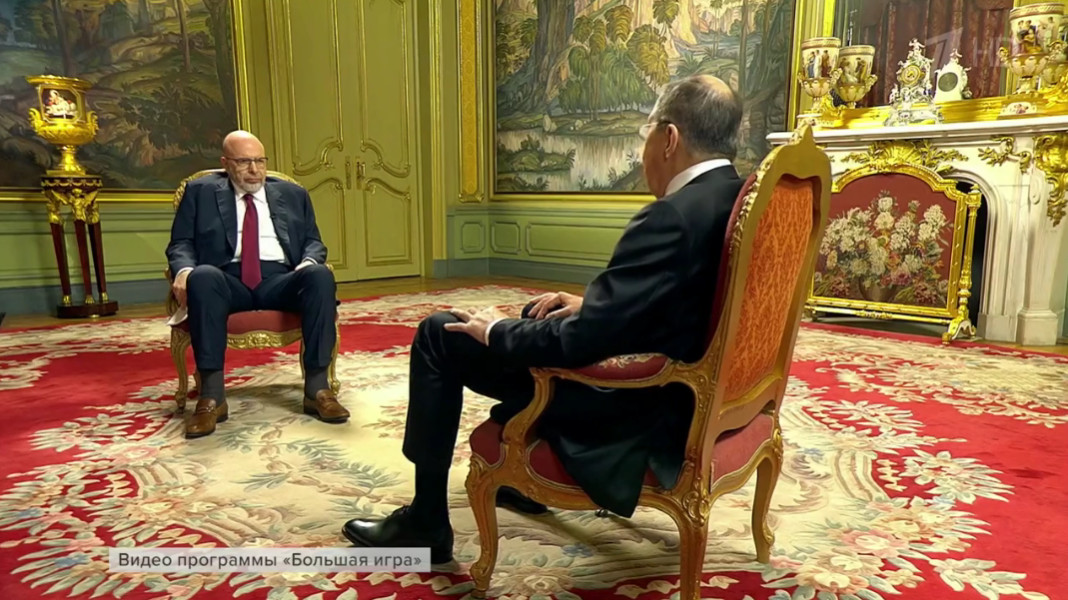 Russian Foreign Minister Sergey Lavrov in an interview with Dimitri Simes, long-time Russian influence agent in the US ©Ekrānšāviņš

Lavrov said on the Russian TV propaganda program "The Great Game": "At the moment, the risks [of using nuclear weapons] are quite significant. I would not wish for them to be artificially inflated. There is no shortage of those who want to. The danger is serious, it is real. It should not be underestimated."

There is no doubt that Lavrov's participation in the program and the timing of his remarks were not accidental. It was timed to coincide with the meeting of NATO defense ministers in Germany, where decisions unfavorable to Russia are expected in relation to the supply of arms and ammunition to Ukraine. I'll remind you that on Sunday, US Secretary of State Antony Blinken and Secretary of Defense Lloyd Austin arrived in Kyiv, where they held one and a half hours of talks with Ukrainian President Volodymyr Zelensky.

This visit to Kyiv by senior US officials was not only an extremely important symbolic gesture, but also a major turning point in the US attitude towards the war in Ukraine. This new US position was articulated by Austin: "We want to see Russia weakened to the degree it cannot do the kinds of things that it has done in invading Ukraine."

One might wonder, living in the Russian information space, what else is new? Wasn't that the US objective from the start? Not even remotely. Rather the other way round. In 1991, the US did not want the USSR to collapse until the last moment, but when that proved to be unavoidable, it did everything to ensure that Russia became the heir to the USSR; that all the USSR's nuclear weapons fell into its hands. The US supported Russia in every way, including financially, to become a prosperous and developed country. Even after the 2008 attack on Georgia, then US President Barack Obama went to Moscow with his faulty reset button, and it was only after 2014 that attitudes towards Putin's Russia began to change.

But until recently, no senior US official had dared to say publicly that he wanted Russia weakened. As recently as March 26, when US President Joe Biden, after a meeting with Ukrainian refugees on the Ukraine-Poland border, made an off-the-cuff remark that "this man [Putin] cannot remain in power", his remark - as a call for regime change - caused a diplomatic scandal and was soon officially retracted by the White House.

Now, Austin's statement was not followed by a retraction, and a meeting of NATO defense ministers was held under this slogan. Although the main political objective of ending Putin's rule has not yet been declared (like the decision taken by the Allies in Tehran in 1943 for a post-war Germany without Hitler), this next-level announcement is only a matter of time.

What does this have to do with Lavrov's statement? Everything. Let us recall Lavrov's interview on March 16 with the RBK television channel, in which he said that Russia would be prepared to use nuclear weapons in the event of an existential threat. Let us remember the famous doctrine of Vyacheslav Volodin: "There is Putin - there is Russia; there is no Putin - there is no Russia". Putting these phrases together, the threat of Putin's power is a sufficient basis for the use of nuclear weapons.

That Putin would be prepared to use nuclear weapons at a critical moment for himself was no secret to his insiders in the past either. Western leaders counted on this. Perhaps they counted too much and gave Putin too much freedom to do whatever he wanted. But literally in the last couple of weeks, the situation has changed significantly. Putin's nuclear blackmail no longer receives the timid and shaky backtracking response that it almost always did until very recently. For example, the White House's response to Biden's call for "regime change".

What happened? What has changed? Our Foreign Minister, Edgars Rinkēvičs, put this change of attitude quite precisely in response to Lavrov's remarks: "If Russia threatens the Third World War, then it is a clear sign that Ukraine is succeeding. We should not give in to Russian blackmail but double down our support to Ukraine and sanctions against Russia. Only firm and consistent approach can restore international law and order."

In other words, nothing weakens Putin's power more than his failure to make progress in Ukraine. In turn, the weaker Putin's power, the more likely it is that Putin's order to use nuclear weapons will be ignored or otherwise bumbled. Putin's power rests solely on the so-called charisma of the leader. As long as things go his way, the entire power vertical is ready to go along with him to the end. As soon as the setbacks start, the strategies for victory or survival of the same individuals become different. If Putin's war machine in Ukraine starts to break down to the point that everyone notices, then the Volodin formula may suddenly turn out to be empty noise with no one to defend it. Just as in February 1917 there was no one to defend the recently beloved Emperor Nicholas II or the "mighty" USSR in 1991.

But for the time being, the entire Putin court is still broadcasting the same schizophrenic nonsense on Solovyov's TV. But outside the TV, Putin's position is getting weaker. In turn, the weaker Putin is, the less he is feared. Both inside and outside. That is why the world's reaction to yet another Lavrov/Putin nuclear saber-rattling is rather muted. Any threat loses its effect from too frequent use. Even if it is a nuclear threat.