"I neither knew him, nor heard him, nor saw him" - this is what Edvīns Šnore, MP of the National Alliance (Nacionālā apvienība), Secretary of Defense, Internal Affairs and Corruption Prevention Committee and Secretary of the Strategic Communication Subcommittee, says about Alexander Babakov, Deputy Speaker of the Russian State Duma and Chairman of the Council of the Russian Armed Forces Sports Club ACSK, currently criminally accused in the US.
03.05.2022. Uldis Dreiblats, Ritums Rozenbergs 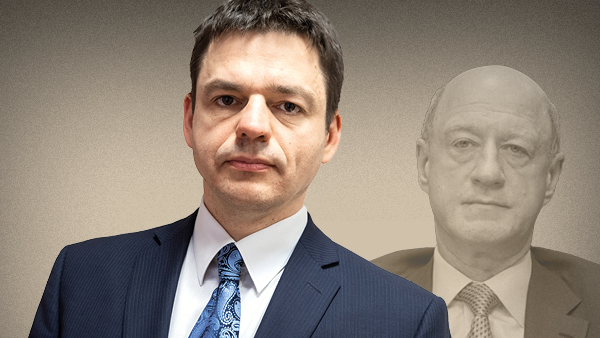 Edvīns Šnore (pictured left), Member of the Saeima from the National Alliance, Secretary of the Defense, Internal Affairs and Corruption Prevention Committee, denies that during his eight years of work at SIA R un I Demo he has ever seen or heard a representative of the majority owner of this company - Alexander Babakov (pictured right), Deputy Speaker of the Russian State Duma and Chairman of the Council of the Russian Armed Forces Sports Club ACSK, currently under US sanctions and criminally accused ©Vladislavs PROŠKINS, F64 Photo Agency

From April 2001 to July 2006, the controlling stake (50.92%) in SIA R un I Demo was held by the company Jetfirm Limited of the sanctioned and accused Babakov. The minority shareholder with 36,75% at that time was the producer Kristaps Valdnieks.

Šnore himself admitted to Neatkarīgā that he started working for this company in 2000.

Since at that time Babakov held the majority of shares in SIA R un I Demo, without his support and favor, Šnore could not have become a member of the Board of this company.

Babakov is not only the Deputy Speaker of the Russian Duma but is also closely connected with the Armed Forces of the Russian Federation, as Neatkarīgā wrote already 20 years ago, when Babakov's company, with the support of another influential Latvian politician at the time, Arnolds Laksa, claimed a controlling stake in Latvijas Krājbanka and made suspicious deals through Latvijas Krājbanka to acquire exclusive Ukrainian hotels.

Šnore currently holds senior positions in public administration and has a state secrets clearance. These circumstances led Neatkarīgā to try to find out how Šnore had managed to win the favor of such a high-ranking Russian official; what duties Babakov had assigned him to perform as a member of the Board of SIA R un I Demo; how often he had met with Babakov; what was Babakov's interest in investing in a relatively small Latvian company; whether there was any impression that this investment was related to the fact that Viesturs Šutko, the Director of SIA R un I Demo, was at the time an adviser to the Prime Minister of Latvia and a member of the Board of Directors of SIA Lattelekom; etc.

Neatkarīgā has already written that Babakov is currently charged in the USA with illegally lobbying Russian interests and recruiting Westerners to work for Russia (see here). After the annexation of Crimea, Babakov was already on the US sanctions list. 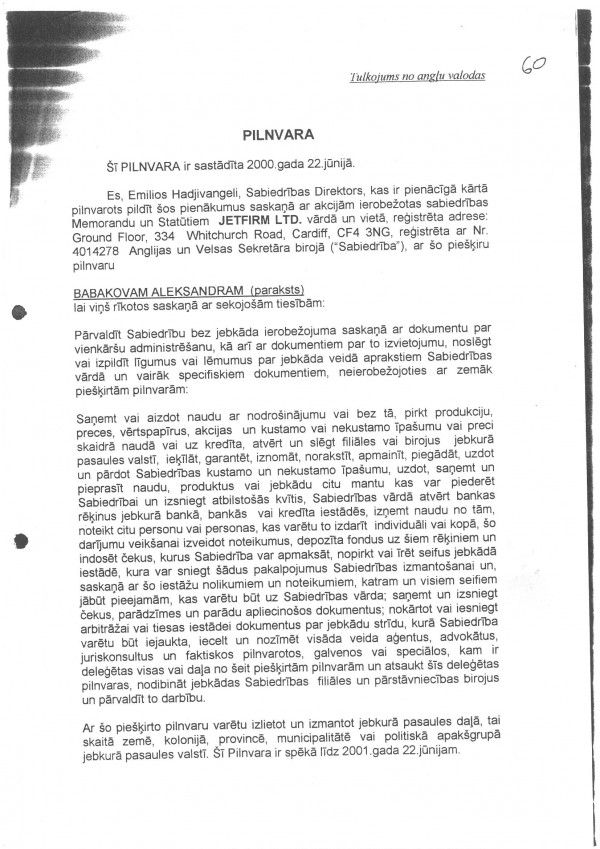 "I did not come to this position with the help of Alexander Babakov, but with the help of Viesturs Šutko (advisor to Prime Minister Einārs Repše, member of the Lattelekom Board of Directors, one of the "architects" of the scandalous Lattelekom settlement), who ran the company (SIA R un I Demo). He hired me. I developed European projects. In the beginning, we won two European projects - Virmus (Virtual Museum) and Vicodi (Visual contextualization of digital information). It was also a scientific project with seven European partners. But as far as Babakov is concerned - I do not know anything about that. I have neither seen him nor heard of him. We worked here in Riga and we mostly developed websites. We also did digital discs. R and I Demo did the Ekspo disc. 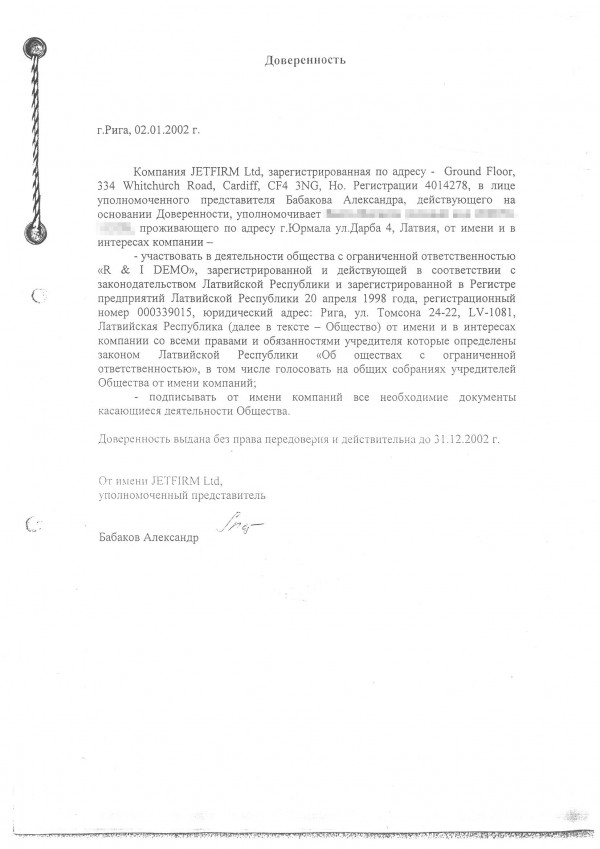 No dividend distribution, no board meetings... Well, I mean, it might have happened somewhere that Viesturs Šutko knew about. We worked there. We had one programmer, we had one artist who made the sites, I was in charge of the two European projects, and there was an artist who later made and sold Infogram," explained Šnore. "I don't know anything. I haven't heard anything about Jetfirm. It was a long time ago. Not only was it a long time ago, but I didn't know anything then either. I had nothing to do with it."

When he found out that Babakov had connections with the Russian armed forces, Šnore exclaimed "Oh no, Jesus, Jesus, no way...".

Neatkarīgā reassured the MP that nothing bad had happened. However, the MP's anxiety did not subside. "What do you mean, nothing bad? Now they will say - Šnore worked for a company owned by a Russian military! Oh no! Alright... At that time, no Babakov was mentioned, nor did he come here. Maybe Šutko knew something. We were going to the office all the time."

Asked if there were any requests from the owners to pay special attention to a certain official or to make projects for any special clients, Šnore replied, "I don't remember anything like that. I started working there in 2000 and things started when we got our first EU project. Latvia was not in the EU at that time. We also got funding from the European Commission's science program. Then we got a second project in 2002. Because we won the projects through a competitive process, we had a very high success rate and I suppose that this factor also attracted the attention of investors. We looked good and we had great prospects for Europe. European Union money is good business. So I suppose an investor came along. Yes! So he appeared after the first project."

Asked why he left SIA R and I Demo, he explained: "I left the company in 2008 when the European project ended. I also left the Board. To be honest, I don't remember. Me being on the Board was just a formality. I don't remember those Board meetings either. I did not have the right to sign. I did not sign contracts on behalf of the company. We also had a director, Kristaps Valdnieks. He could tell you more about this. Yes, everything is clear. What crazy things have come to light, and it is clear in what light it will be presented..."

Neatkarīgā continued to reassure him that it would not be that bad. To this, Šnore said, "Well, it can't get any worse - that the Deputy Speaker of the Russian Duma..."

In the course of the conversation, Šnore admitted that he currently has a state secrets clearance.

When it was pointed out that representatives of the CPB might also start asking about his work for the company in question, the majority shareholder of which was a company linked to Babakov, Šnore said: "They knew all along. Why should they ask, what is the connection? When you fill in the application form for a state secrets clearance, everything has to be disclosed there, but - what to disclose? I don't have anything to do with it."

In Latvia, Babakov became the subject of discussion when Neatkarīgā revealed that he probably owned Macasyng Holding, a company registered in the Netherlands, which had gained significant influence in Latvijas Krājbanka, then still partly owned by the Latvian state.

Macasyng Holding also claimed a controlling stake in Latvijas Krājbanka in 2003, but, as is well known, it was not Babakov but another Russian citizen, Vladimir Antonov, who later took control of Latvijas Krājbanka.

In 2001, Neatkarīgā revealed that Macasyng Holding had also become a shareholder in the Russian Armed Forces football club ACSK, while at the time it was Babakov who was chairman of the ACSK Board of Directors.

When Arnolds Laksa, the then already former President of Latvijas Krājbanka, became Chairman of the Saeima Defense and Internal Affairs Committee and, consequently, a member of the National Security Council, Neatkarīgā revealed that he was millions in debt to Macasyng Holding, the co-owner of ACSK in Russia.

Meanwhile, Babakov's company Jetfirm Limited was noticed by Neatkarīgā in 2003, when it acquired two prestigious hotels in Ukraine by passing money through Latvijas Krājbanka. This information was also republished by other Latvian media, such as news agencies LETA, BNS, newspaper Biznes i Baltija, portal Delfi (see, for example, here). So it turns out that Šnore just did not notice this information at the time.

But more recently, Babakov and two of his office staff - Russian citizens Alexander Vorobyov and Mikhail Plisyuk - were charged in the US with "conspiracy to act as agents abroad without coordinating with the US Department of Justice"; "conspiracy to defraud the visa regime"; "conspiracy to evade OFAC sanctions".