The study on the torture of Iraqis is a complete fabrication

The State Border Guard categorically rejects the information presented in the study "Trapped in a lawless zone: humanitarian crisis at the Latvia-Belarus border" by Aleksandra Jolkina about alleged violence committed by Latvian officials. The testimonies provided by Iraqis have been checked and no cases of violence have been confirmed, even though, according to these testimonies, extreme violence against border crossers was a daily occurrence at the border.
06.05.2022. Imants Vīksne 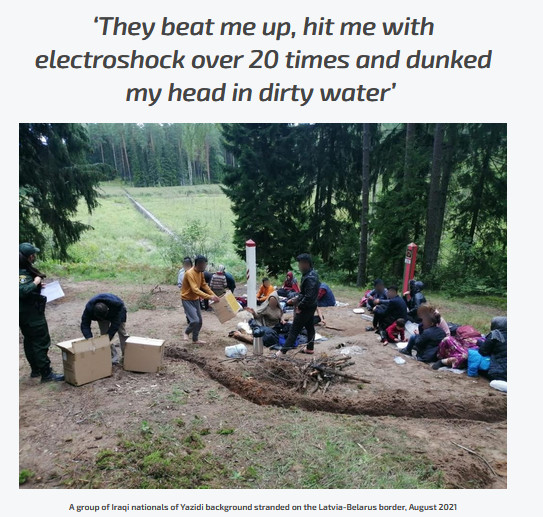 It is significant that many of the testimonies compare Latvian border guards and soldiers with Belarusian border guards and portray the Belarusians as kind and compassionate people, while the Latvians as pathological brutes who take pleasure in torturing people. This comparison is probably the real aim of the study - to discredit the Latvian state force structures and Latvia as a whole.

With the intensity of violence depicted in the study, it would be impossible that not one migrant was seriously injured, for there to be no violent deaths. But there are none. It would also be impossible that Iraqi testimonies of violence by Latvian border guards and soldiers would not find their way onto the web. But there is no such evidence. There are only the horror stories summarized in Aleksandra Jolkina's study. Neatkarīgā already reported about them in the publication "Questionable study: Latvia is worse than ISIS."

The study contains clearly false evidence of atrocities committed by Latvian state border guards and National Armed Forces soldiers against Iraqi migrants who for a long time tried to enter the European Union by criminally crossing the Belarus-Latvia green border.

Tortured with electroshock, left freezing in minus 20 degrees, drowned in a bucket of dirty water, even kicked elderly women. Here are some more examples from the testimonies included in the study:

"They forced the men into cars and beat them for 10-15 minutes."

"They treated us worse than Daesh in Iraq."

"The Belarusians did not hit us but the Latvians hit us a lot."

"They hit my finger and broke it."

"The men were beaten up by Latvian commandos. The Belarusian border guards never hit us."

"They beat me up, hit me with electroshock over 20 times and dunked my head in dirty water."

"One of the Latvian officers promised me to bring back my family if I make a video and tell that Belarusian border guards were bad."

"Belarusian border guards never hit us but the Latvians treated us as if we were not human beings."

"Latvian commandos threatened to kill us if we come back from Belarus again."

"They were beating everyone who was with us."

"I was beaten up by five or six men."

"One person hit me with electroshock 20-22 times."

"They dunked my head into dirty water three times."

"The men in black uniforms hit me with sticks and electroshock, including my private parts."

"I cannot even describe how brutal it was."

"Tthe Belarusians were easy with us; they gave us food and sometimes cigarettes."

"If the government catches Daesh, they put them in jail but do not do to them what Latvia did to us."

"The Belarusians were friendly with us."

"One time they hit my mum with feet."

Such violence would require a conspiracy

A close reading of the evidence in the study shows that the exaggerations are obvious. Such an intensity of violence would only be possible provided that it is institutionalized and accepted at the highest levels of command, that there is agreement on these crimes and that they are covered up by all the services involved: border guards, soldiers, police and medics. All those who worked with illegal border crossers in the migration crisis. In order to torture people so intensively, there would also have to be an organizational scheme, a protocol of action, a timetable. Ultimately, also a conspiracy to cover up these crimes. To beat a group of 20 people, as one of the testimonies claims, would require many beaters and time.

The fact that the researcher herself did not suspect that the testimonies of the migrants who were deterred contained fabrications, and that she uncritically reproduced them in the general public, calls into question her own scientific and research aims.

Researcher Jolkina should now be investigated

Aleksandra Jolkina has still not provided answers about this research, and questions abound. How were the witnesses selected, where she got their contacts, were they paid for their testimony. The State Border Guard has not given the researcher the migrants' contacts. Major Kristīne Pētersone, Chief Inspector of the Strategic Development and Public Relations Division, confirms that Aleksandra Jolkina contacted the Border Guard last winter, asked to go to the border and the center for detained foreigners in Daugavpils, but did not end up going there. Then, several months later, she contacted them again, sending questions about specific individuals, but when asked to explain the intended use of this information, the researcher stopped further contact. And then her research appeared on the web, with all the false testimonies, the accusations of terrible violence and torture. It would be useful for the now defamed Latvian state institutions to investigate the researcher and her motivation for spreading this fabrication about evil racist Latvia and good Belarus to the world.

There is not even one case

The State Border Guard claims that none of the many episodes of violence mentioned in the study ever happened. Not a single one! Here is the explanation given to Neatkarīgā. "The allegations made in the study are blatant defamation of the conduct of State Border Guard officers in carrying out their duties to prevent the illegal crossing of the Belarus-Latvia state border under hybrid threat.

It should be emphasized that to date, no case has been detected in which members of the State Border Guard, the National Armed Forces or the State Police have used physical force and/or special means, even in a situation of extreme necessity.

Similarly, no complaints have been received regarding the use of physical force and special means by persons attempting to illegally cross the Latvian-Belarusian border. Emergency Medical Service teams are also called to the Latvian-Belarusian border to check the health condition of persons, if necessary, and so far there is no information that the EMS teams have detected any injuries to persons that could have been caused by the actions of the State Border Guard, the National Armed Forces or the State Police.

The use of physical force and special means is a last resort, and the necessity and proportionality of the use of force or special means is assessed in each specific case before they are used. The State Border Guard shall act in such a way that human health and life are not endangered. People deterred from illegally crossing the state border shall be provided with humanitarian assistance, i.e. they shall be provided with basic necessities such as food, water, hygiene products, clothing and footwear appropriate to the climate conditions, as well as the necessary medical assistance."

The Latvian state treats all people humanely. Even criminals recruited to carry out the tasks of an aggressor state.